Sheryl Lee Ralph took a minute or two to absorb the fact she had won who won the Outstanding Supporting Actress in a Comedy Emmy for her role in “Abbott Elementary,” at Monday night’s ceremony, but the actress took that moment to gather her full power by the time she hit the stage.

After taking a deep breath, she began her acceptance speech with a stunning rendition of Dianne Reeves’ “Endangered Species,” which begins with the lyrics, “I am an endangered species, but I sing no victim’s song/I am a woman I am an artist/And I know where my voice belongs.”

In the press room, Ralph explained why she chose that song for that moment: “You know what, I’ve been singing that song many years because I think of myself as an artist, as a woman, especially as a woman of color. I’m an endangered species. I don’t sing a victim song, a woman. I’m an artist, and I know where my voice belongs. And there’s so many young actors are these even kids that think they know what they’re going to do in life, find your voice, and put it where it belongs.” 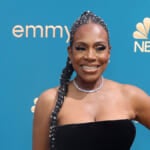 After her song, Ralph, who plays kindergarten teacher Barbara Howard on the hit ABC series, delivered a moving speech that had the audience on its feet.

“To anyone who has ever, ever had a dream and thought your dream wouldn’t come true, I am here to tell you that this is what believing looks like,” said Ralph. “This is what striving looks like, and don’t you ever, ever give up on you.” She went on to profusely thank everyone who “voted for me, cheered for me, loved me.”

“Recognize, after all this time as being one of the best of the best in my industry with a group of women. They’re all the best. And to top it off this particular year, tons of great TV and my little freshman show to break through to be seen the way it is?” she told the press. “Oh my god. I’ve got the golden ticket,” she said.

It’s the first win and first nomination for the 65-year-old actress, whose many TV credits include “Ray Donovan,” “Claws,” “Moesha,” “Designing Women,” “It’s a Living” and soap “Search for Tomorrow.”

The Twitterverse was also on its, feet, so to speak, with rapturous praise including this celebratory tweet from Gabrielle Union.

Katie Campion contributed to this story. 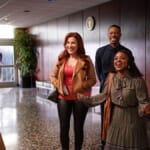