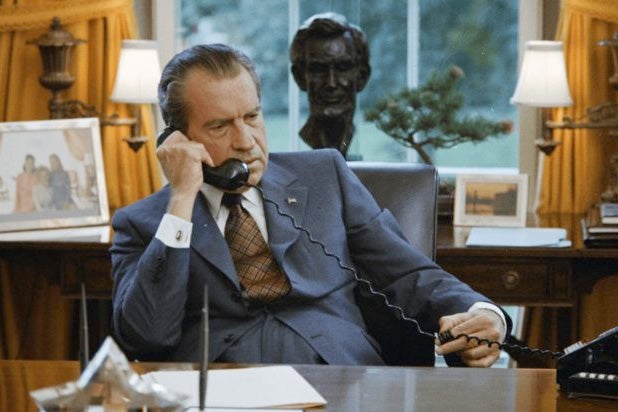 So what does Oscar-winning documentary maker Charles Ferguson know…and why does he think we should know it?

There are many who may be wondering why Ferguson has not only chosen to re-tell the entire Watergate story — from the 1972 break-in at Democatic National Committee headquarters to President Richard Nixon’s resignation two years later — but to ask viewers to sit for four hours through his account.

That’s how long “Watergate” plays in a movie theater, which it did briefly to qualify for a possible Oscar nomination. Beginning this weekend, it will play over separate installments on the History Channel. Ferguson explains that when he looked back over the last 46 years, “I found it amazing that no one had ever done a really comprehensive telling of what can only be called a true thriller.”

Now, especially with the subtitle “How We Learned to Stop an Out-of-Control President,” the plays like a warning. As one critic wrote, after seeing the film at the Telluride Film Festival, “the parallels between Watergate and Trumpocalypse are so boggling, they preclude any other reason for making the film now.”

Ferguson said that Trump hadn’t even declared his candidacy when he started collecting materials. Still, he concedes that his approach began to change as the new administration emerged: “Suddenly, it became much more grave.”

“This documentary is more vital now than ever,” says former Congresswoman Elizabeth Holtzman, who sat on the House Judiciary Committee that passed three articles of impeachment against Nixon over his involvement in the break-in. “It shows that our country was able to recapture our democracy in the face of a president who put himself above the law.”

Ferguson interviewed most of the surviving players in the scandal, except for a few who turned him down, notably Nixon campaign lawyer Donald Segretti and secretary of state Henry Kissinger.

Many of the principals have passed on, of course, but his talking heads include John Dean, Sen. Lowell Weicker, journalists Bob Woodward and Carl Bernstein, and numerous prosecutors who were involved.

A master documentarian who won the Academy Award for 2010’s “Inside Job” about the financial meltdown, Ferguson strategized on who to ask — and when. “I usually do the less famous ones first, who often have great stories,” he explains. “So when I go to the really key ones, they realize I already have a lot of stuff and am not going to go away.”

While boomers still recall a medley of the greatest moments of the scandal, younger generations know only that it introduced “gate” into our lexicon. Ferguson is already showing the film at universities, where he asks students to guess how many Watergate figures they think went to jail. The guess is usually zero.

“It blows their minds when I tell them that 41 people did,” he says, pointing out the cynicism already steeped in young minds.

“I don’t think my students have any idea of what was happening beyond a vague awareness,” adds historian and USC professor Richard Reeves. “‘All the President’s Men’ is as close as they come to history.”

Ferguson’s “Watergate” may have initially seemed like a remake, but it turns out to be a moment to remember what went wrong and why, how the “cures” turned out to be temporary and, of course, how it may all be happening again.

You can listen to this “Shoot This Now” podcast interview with “Watergate” director Charles Ferguson on Apple or right here: