As the television business continues to lose its footing in a down economy, another victim of the downturn has been quietly destabilizing the revenue stream for TV programming.

Dozens of English- and Spanish-language network-affiliated stations are in jeopardy of failing, as the three major companies that own them have declared bankruptcy over the past year.

Pappas Telecasting Companies, known as the largest privately held commercial broadcast operator in the U.S., was the first to file for bankruptcy in May 2008. 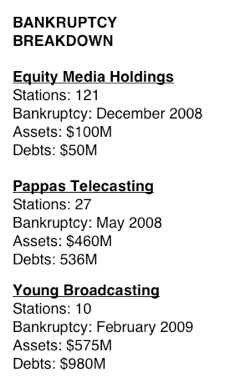 Equity Media Holdings, owner of 121 stations, and Young Broadcasting, Inc., owner of 10 stations, have filed for Chapter 11 in the last three months.

That comes in addition to the bankruptcy of the giant Tribune company, with its 23 stations.

With so many stations in limbo and competition from the Internet and digital channels, many television insiders wonder whether local TV stations will become obsolete. That speculation is only reinforced by telecom companies that are eager to buy local stations for their valuable airwaves.

Representatives of Equity, Young, Pappas and their parent companies did not respond to requests for comment. The phone numbers listed for Equity and Pappas’ respective corporate headquarters have been disconnected.

The companies are said to be desperate to sell their key stations.

“The idea is to sell off the stations to pay off the lender,” an individual close to Equity said. “Equity tried to do that with the lender in place, and the lender didn’t think the company could get the job done,” the individual said.

In court papers, Pappas Telecasting also blamed its bankruptcy on “the extremely difficult business climate for television stations across the country” particularly the “poor ratings of the CW Network.”

When asked to comment, a CW spokesman said although ratings haven’t matched those of other networks since it launched in 2006, they have increased substantially since last year.

But the bankruptcies and low ad sales aren’t the only obstacles facing the embattled TV companies. Just like the movie and music industries, local television has to compete with new media such as the Internet and new digital channels.

“There’s a whole new gamut of distribution vehicles,” said Julio Rumbaut, a U.S. Hispanic media adviser and founder of several Florida stations. “I think you will see substantial changes because of where the content can go. Consumers have a lot more choices now. Right now content is king. And there are a lot more distribution channels than there is content for them.”

Rumbaut said telecom companies are also becoming interested in buying local stations to capitalize on the stations’ valuable frequency. Such frequency — or “spectrum” — could be used to expand broadband and cell phone reception.

The individual close to Equity agreed. “Some of these stations are worth more just because of their airwaves than they are as operating businesses,” he said. “But no one in the telecom world or the broadband world has figured out exactly what to do with this spectrum. So, even if it’s valuable, they’re not willing to pay up until they know what they want to do with it.”

Leticia Juarez, vice president of advertising agency Castells & Associates, said it may appear that local TV stations are in trouble, but the stations offer advertisers opportunities that other media cannot.

“Some of the local stations are able to do product integration that you may not be able to do with bigger networks. That brings a holistic approach to the buyer,” she said.

Juarez said those looking for hope in the local TV market should focus on a new Spanish-language station. Estrella TV, is planning to launch in most of the 20 largest Hispanic markets, including four affiliates in Texas and one in New York.

“We’re talking about the recession and bankruptcies, but there’s still a new network popping up because there’s a need for diversity and options.”