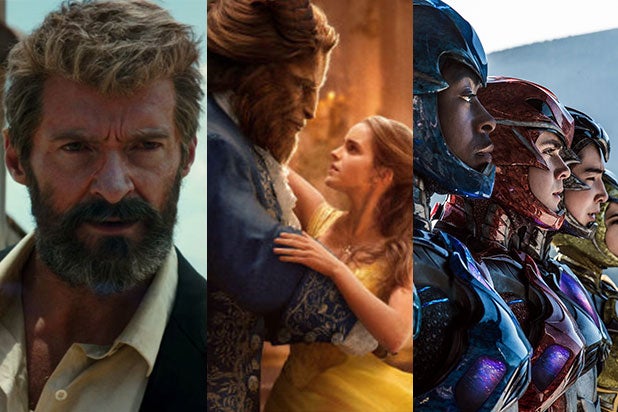 Over the past years, March has become a home for major blockbusters like “Batman v Superman: Dawn of Justice” and “Zootopia” — but this year’s March is highly unusual, given that the industry is releasing a tentpole every weekend.

Fox’s Marvel movie “Logan” hit theaters on March 3 and opened to $88.4 million; a week later, Warner Bros./Legendary’s “Kong: Skull Island” was released and racked up $61 million. This week, Disney is anticipating a $120 million debut for its buzzy live-action adaptation of “Beauty and the Beast.”

And the week after will see the release of Lionsgate’s “Power Rangers,” followed by Paramount’s sci-fi thriller “Ghost in the Shell” on March 31. All have sizable budgets, and many are expected to do very good business.

“This is unusual, and there seems to be an embarrassment of riches this year,” Fox President of Domestic Distribution Chris Aronson told TheWrap, explaining his rationale for booking Hugh Jackman’s final outing as Marvel superhero Wolverine at a time other than the height of summer. “Now, the industry sees March as a fertile movie-launching period.”

Jeff Bock, senior analyst at Exhibitor Relations, noted that March has never been a movie desert. “March is a hotbed of Hollywood heat this year, but that really shouldn’t come as a shock to anyone as there’ve been huge hits surfacing in March over the last couple decades,” he said. “The only difference in 2017 is that the industry is dishing out one nearly every single weekend.”

“This is a trend that is now fully operational, as audiences across the country crave summer-like blockbusters to beat the winter blues,” added Bock.

The Numbers analyst Bruce Nash even calls it the creation of an entirely new spring box office season: “It runs from the weekend after the Oscars (typically the first weekend in March), until early May, and it’s become a time to release slightly riskier movies that could develop into major franchises.”

You could say that studios have been pushing to open blockbuster films in March since the modestly budgeted “The Hunger Games” opened to $152.5 million in 2013 — launching a hugely successful franchise that made a major star out of a then relatively unknown Jennifer Lawrence.

Last year, both Disney’s “Zootopia” — the rare animated hit that wasn’t a sequel or based on a familiar story — and Warner Bros.’ “Batman v Superman: Dawn of Justice” grossed more than $300 million; and “Batman v Superman” broke the record for March openings with $166 million.

The majority of films released in March can’t be considered studio tentpoles either in production budget or star wattage; many are family-oriented projects geared to audiences seeking diversions during spring holidays like Easter.

“It’s possible to get a huge weekend during this time of year, which was assumed not to be the case a few years ago,” Nash explained. “At the same time, there’s less competition from the really big tentpole films.”