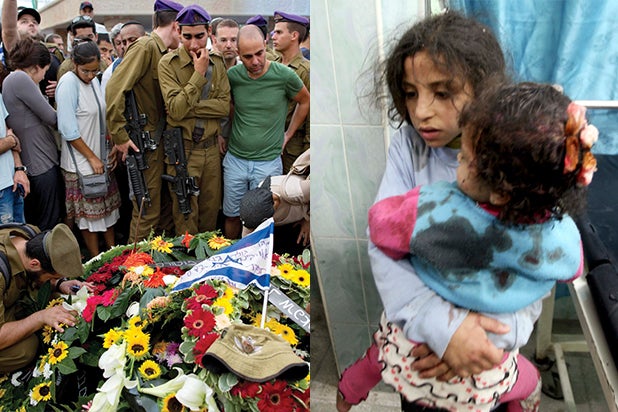 Like everyone else, I’ve been watching the media war surrounding the military conflict in Israel and Gaza with equal fascination and horror.

Images of bleeding Palestinian children, of tiny corpses, of grief-maddened mothers tell a story. But they tell only part of a story.

Now we have images of sophisticated tunnels, complete with electricity and communications systems, burrowed dozens of feet beneath the ground, built to kidnap and terrorize Israelis. They tell a different part of the story.

As outside observers, it is all too difficult for us to know how to evaluate the images we are being sent, where to stand, how to think.

But that’s not all of it. The whole thing has become so complicated and tangled that, as an observer of the Israeli-Palestinian conflict for something like four decades, it numbs me into dumb silence.

In an unequal fight, Palestinians have used their innocents as proxies for their political truth since the start.

The images worked best when they were authentic: children in the streets, hurling stones at Kevlar-clad, machine-gun wielding Israeli soldiers. Those were images that reflected what was really happening in the streets, during the first Palestinian uprising in 1987 and the second one in 1999.

But not infrequently, Palestinians have used their images cynically and in ham-handed ways, which always seem to stir the desired sympathy, along with a dose of disgust.

Hamas is a master of this game. No Middle East (or other) journalist may forget the story of 12-year-old Muhammed al-Durrah, whose death in the streets of Gaza in 2000, aired by French TV, caused an international outcry against Israel, and later turned out to be an apparently-calculated propaganda ploy.

Meanwhile, Israel claims the moral high ground, a losing battle given the skewed stakes and civilian deaths. After decades as a regional power under the mantle of democracy, Israel is rightfully held to a higher standard than those of its opponents. It cannot then complain when a double standard is applied. The double standard is of their own making.

And yet its argument of self-defense makes no dent in the views of anti-Semites in Europe who seek fuel for their fire and easily find it.

I’ve been watching a new Sundance Channel show that takes an appropriately dark view of all the players in this long-running drama. In “The Honorable Woman,” Maggie Gyllenhaal plays a British Jew with a conscience, sympathy for the Palestinians and an affinity for Israel.  She is the scion of an industrialist intent on building a legacy of peace through a telecommunications network in the West Bank.

But Nessa is quickly entangled in the politics of both sides. In an episode I watched last night, a fictional Palestinian militant leader tells her that he ordered the deaths of many people she loves, and then says he knows she would never retaliate. That she considers herself superior because she will not stoop to his level.

Nessa does not dispute his assessment. The leader says, “And that makes me hate you even more.”

So it goes. For Palestinians on the ground, “the truth” is obvious: They are being attacked by a regional superpower, with disproportionate force and untenable civilian casualties.

For Israeli on the ground, “the truth” is equally obvious: Their cities are being relentlessly shelled by an enemy embedded in their own civilian enclaves.

And throughout, journalists are caught in the middle, up close and on the ground constantly with the innocent civilians who suffer, suffer and suffer some more.

Those journalists can only show what they themselves see. As New York Times photographer Tyler Hicks said this week of chasing the truth in Gaza:

“Sometimes people assume that you can have access to everything, that you can see everything. But the fighters are virtually invisible to us. What we do as photographers is document what we can to show that side of the war. There are funerals, there are people being rushed to the hospital, but you can’t differentiate the fighters from the civilians. They are not wearing uniforms. If there is someone coming into the hospital injured, you can’t tell if that’s just a shopkeeper or if this is someone who just fired a rocket towards Israel.”

Here’s something I know well, as does the region’s media-savvy players: Images lie. They lie every day. Just as governments lie.

And we – we observers grope in broad daylight for the truth. While the people suffer.