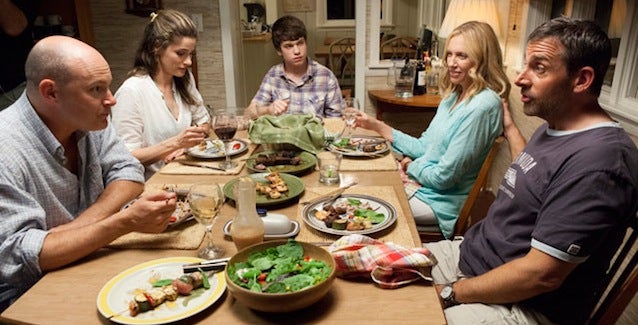 Coming-of-age stories are a dime a dozen.

Even cheaper, actually. We all come of age, and we all have stories.

It takes real talent to make yours special, and writers Nat Faxon and Jim Rash demonstrate just such talent with “The Way, Way Back,” a delightful comic tale about a 14-year-old boy spending the summer in a beach town with his mother and her domineering new boyfriend. The film marks the directing debut of the duo, who won an Oscar for cowriting “The Descendents” (2011), along with director Alexander Payne.

“Way, Way Back” works because Faxon and Rash concentrate on the specifics. They let us know exactly who each and every character is and what makes them special. They give viewers a spot-on sense of season and place. They’re telling this story, not any other, and yet it’s a story to which everyone can relate.

When we first meet Duncan (Liam James), he’s riding in the way way back, rear-facing seat of a vintage station wagon. Trent (Steve Carell), Duncan’s mom’s beau, is driving Duncan and his mother, Pam (Toni Collette), to his beach house for an extended vacation.

Trent, a successful car salesman, berates Duncan for not being more outgoing and tells him he better shape up this summer. Duncan responds by putting in his ear buds.

At the cottage, Duncan is the odd man out as Pam works hard to mesh with Trent’s well-established social set and Trent’s teenage daughter, Steph (Zoe Levin), who’s older than Duncan, makes it plain that he’s too young and dweeby to hang with her cool crowd.

Duncan ends up spending his days at a rinky-dink local water park, where he is befriended and then given a job by Owen (Sam Rockwell), the amusement attraction’s free-spirited, laid-back manager. In Owen, Duncan finds a father figure, one whose sound advice and steady encouragement become increasingly meaningful to the teenager as the summer goes on.

Part of what makes “Way, Way Back” so engaging are the terrific performances. First among equals in the talented cast — which also includes Allison Janney, Maya Rudolph, AnnaSophia Robb, Amanda Peet and Rob Corddry — is Rockwell. He turns Owen into a charismatic charmer, one endowed with a motor mouth, quick wit and loose-limbed physicality but also possessing a discerning kindness.

Aiding the actors is the fact that Faxon and Rash have made sure that each character is shown to have facets and complications. Take, for example, the character whom Janney so ably plays, a potty-mouthed lush who lives next door to Trent. The woman mercilessly picks on her young son for having a walleye (“Would you point, please? I have no idea where you’re looking when you tell me to look at something,” she yells at him). But at the same time, it’s clear that she adores the kid.

Faxon and Rash, who are also performers, turn up — they must have known the casting director — in supporting roles. Rash, in particular, hits comic high notes as a whiny clerk at the water park’s gift shop, a guy perpetually on the verge of quitting his job.

“The Way, Way Back” is way, way worth seeing.