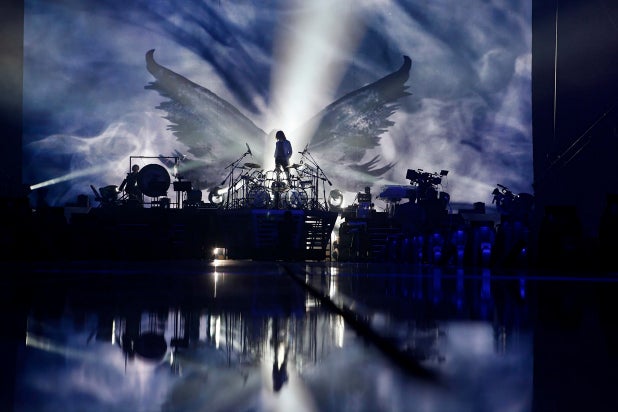 If you’ve never heard of X Japan and are prone to musical FOMO, fret not — “We Are X” is here to tell you why yet another band you’re unfamiliar with is actually of the utmost importance. Stephen Kijak’s film follows in the tradition of other recent documentaries about heretofore unsung artists — think “20 Feet from Stardom” and “Searching for Sugar Man” — albeit with a minor twist: X Japan is actually massively popular in its home country and could be on the verge of spreading its fame to this side of the Pacific.

With more than 30 million records sold since forming in 1982, and a fiercely loyal fanbase, the quintet prepares for a long-awaited Madison Square Garden concert throughout the movie. X Japan plays a kind of arena rock-inflected metal, mixing the progressive leanings of Queensrÿche with the theatricality of KISS. (Not coincidentally, Gene Simmons is among the celebrity testimonials here; ditto Marilyn Manson and Stan Lee.) “We Are X” at first seems a cut-rate music doc, with all the concert footage and archival photos fans demand of the genre, but then more and more attention is granted to Yoshiki, the band’s frontman.

He distinguishes himself (and, by extension, this documentary) from similar acts with a series of ponderous, existential questions: “Who am I? What is human?” His identity is so inextricably linked to that of the band he’s been in for most of his life that he doesn’t seem to know how to exist without it — or, more troublingly, whether he even would.

Almost always wearing sunglasses, the multi-instrumentalist is the kind of artist who retreats into his art and seems lost once the concert ends and it’s time to re-enter the real world. Yoshiki strikes a Michael Jackson-esque figure, with a similar mix of family issues, physical frailty and immense talent informing both his on- and offstage personae. He always speaks frankly and with candor, whether discussing frequent hospitalizations in his youth and vaguely suicidal ideations or his actual music; suffice to say that these issues reflect back on one another throughout.

X Japan has had its ups and downs, of course; in one of the film’s stranger moments, Yoshiki says they broke up for a decade because their singer was brainwashed. (He’s since recovered, apparently.) But like many documentaries of its kind, “We Are X” finds its subjects on the cusp of wider recognition. Though the success of that endeavor seems assured by the nature of the genre, we’re told that X Japan’s first attempt to make it big in America circa 1992 failed as a result of the language barrier. (“If those guys were born in either America or England and sang in English,” suggests Simmons, “they might be the biggest band in the world.”)

Kijak previously co-directed “Cinemania,” an account of New York City cinephiles whose devotion to repertory screenings was genuinely fanatical. Here he once again zeroes in on the fine line between passion and obsession, whether among X Japan’s members or their fans; when their former guitarist committed suicide after the band first broke up in 1997, for instance, at least one devotee is said to have followed suit.

“We Are X” is nothing you haven’t seen before as a music documentary, but it succeeds as an examination of why we turn to escapist art, and what we do when it’s no longer there.