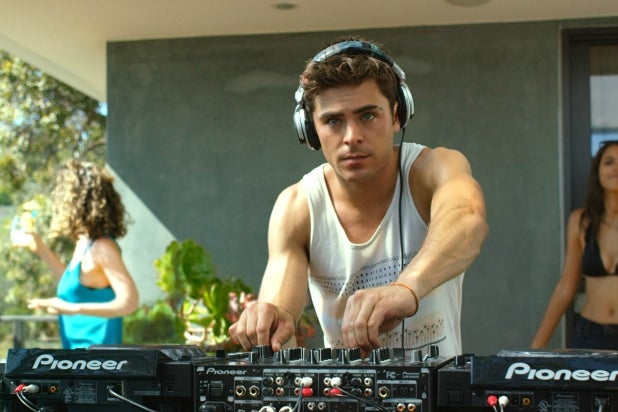 There’s an unspoken deal that we, the audience, make with the filmmakers who create movies about fresh-faced young people with big dreams, and it goes like this: the filmmakers throw up the occasional impediment on the road to success, and we pretend as though there’s a chance in hell that our hero won’t wind up with the girl, the gig and the moral high ground in the final scene.

In “We Are Your Friends,” starring Zac Efron as a San Fernando Valley dude with aspirations to become a world-renowned DJ, first-time director Max Joseph and his co-screenwriter Meaghan Oppenheimer (working from a story by Richard Silverman) violate this compact. Sure, there’s the occasional bump in the road, and even the death of a minor character, but nothing ever seems like it’s going to get in the way of our hero and his dreams of EDM (electronic dance music) glory.

See Video: Zac Efron Is a Rising EDM DJ Falling for Emily Ratajkowski in First 'We Are Your Friends' Trailer (Video)

Efron’s Cole gets the occasional club gig, spinning for free drinks, and he still spends his days palling around with his high school crew: loyal, hotheaded Mason (Jonny Weston, “Chasing Mavericks”); Ollie (Shiloh Fernandez, “Evil Dead”), who has pretensions of being a movie star but who deals drugs in the meantime; and shy, kind-hearted Squirrel (Alex Shaffer, “Win Win”).

At one of those club nights, Cole’s head is turned by the beautiful Sophie (Emily Ratajkowski), after which he winds up befriending headliner James (Wes Bentley), a world-renowned DJ who takes Cole out for a wild night that includes PCP-laced cocktails. (Director Joseph depicts Cole’s drug trip as paintings coming to life and people turning into paintings, in a rare on-screen freak-out that actually works.)

Cole wakes up hungover at James’ swanky digs, surprised and chagrined to learn that Sophie also happens to be James’ girlfriend and personal assistant. James takes Cole under his wing and teaches him — and by extension, the audience — everything a DJ should know, from the ideal 128 beats-per-minute of a dance track to why it’s OK never to take requests.

(Unfortunately, Cole’s big breakthrough as a DJ involves a “32 Short Films About Glenn Gould”-style appropriation of the sounds around him, leading to a dance track cluttered up with wind chimes and humming electrical wires and non sequitur conversation from his friends. The song is supposed to represent his triumph, but it’s more the kind of track that makes you take a bathroom break during a night of dancing.)

The predictability of the storyline — Cole discovers that his day job buying out foreclosed houses is immoral, Cole and Sophie fall for each other, James finds out about their relationship — would be forgivable if there were a single character here with any resonance. Only James really registers as a real person, and that’s more out of Bentley putting in overtime than anything that he’s given to say or do. (Ratajkowski somehow gets stuck with a part that’s even more underwritten than the role of herself in this summer’s misbegotten “Entourage” movie.)

Also Read: Diplo on Major Lazer's Movie Future, 3 Music Artists to Watch and Why Justin Bieber Is an 'Unsafe' Collaborator

Besides Bentley’s performance, the only thing “We Are Your Friends” has going for it is the occasional directorial flourish, with words on screen or characters addressing the camera or that painterly drug trip. These jolts are few and far between, but they’re most welcome when they arise.

Ultimately, this is a movie that wants us to understand and appreciate the difference between a DJ who knows how to get people on the dance floor, and a “sell-out” who only plays what people want to hear. For those versed in EDM, that gap might represent the Grand Canyon, but for those of us with an ear untrained in the specifics of untz-untz-untz, it’s a pretty fine line.