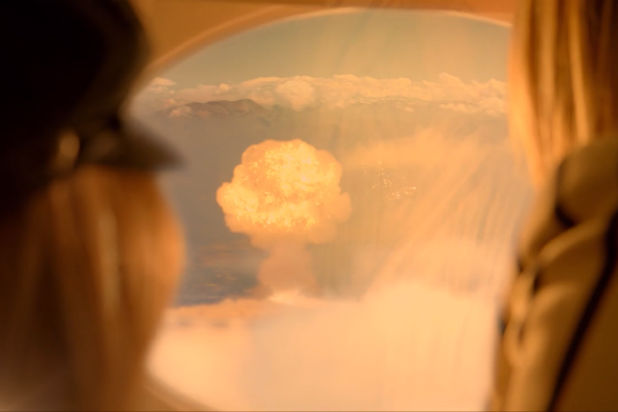 (Spoilers ahead for the premiere of “American Horror Story: Apocalypse” on FX)

It’s “American Horror Story,” so I guess we should have expected the first episode of “Apocalypse” to be weird and confusing, but this one feels particularly obtuse. That’s not a criticism — just a note about how extra-weird this season is shaping up to be.

Here’s what we know about the situation in “American Horror Story: Apocalypse” so far:

1. There was an actual nuclear apocalypse that went down to kick things off. This doesn’t appear to be some kind of con to trick people into locking themselves in the outposts. There were news reports, and we even saw one of the bombs go off in Los Angeles.

2. A group called “The Cooperative” orchestrated a series of shelters to protect small groups of people from the nuclear fallout. We haven’t seen many people inside Outpost 3, where we spend most of the episode — just the two kids who were forcibly saved, the six rich people who bought their way in, the two women in charge, the tall enforcer woman and a couple of servants. Some of those rich folks got to the outpost using a plane that had no pilot. Hmm.

They don’t use any kind of technology in the outpost, and everybody has to wear old-timey clothes and they’re not allowed to have sex. What the point of that is, who knows?

3. The women in charge, Wilhemina Venable (Sarah Paulson) and Miriam Mead (Kathy Bates), seem to have some kind of plan that is not aligned with that of The Cooperative, though it’s tough to guess what that plan is just yet. But we do know it involved murdering one of the guests and cooking his corpse for dinner, and playing the same song over and over again for 18 months.

Also Read: Here's How Many Episodes 'American Horror Story: Apocalypse' Will Have (Exclusive)

4. After 18 months in the outpost, there still appears to be plenty of fallout outside, but at the end of the episode they do finally seem to have some contact with the rest of The Cooperative when Michael Langdon (Cody Fern) pays Outpost 3 a visit. Langdon says he’s there to take those most worthy of survival to yet another secret, and more secure, outpost, as several other main outposts have been taken and overrun by means unknown.

5. In the last scene of the premiere, the horses Langdon rode in on were put down apparently due to damage they’d suffered from being outside — those cute gas masks they were wearing didn’t help all that much apparently. Then, in the final shot, something in the woods drags one of the horse corpses out of sight.

6. “American Horror Story: Apocalypse” is a continuation of both the “Murder House” and “Coven” seasons, but the only tie to those seasons that we’ve definitely seen so far is Langdon, who was born of the union between a real woman and a ghost man. Allegedly, Michael Langdon would grow up to be the Antichrist, but for now all we know is that it looks like he’s a middle manager of sorts within The Cooperative.

We’re left after the premiere with about nine billion questions because everything about this story is just so weird and lacks any sort of clarifying detail. That’s definitely on purpose — “American Horror Story” is usually like that, and then the pieces come together later. But with “Apocalypse” we don’t even really get to settle in with a mundane beginning that features weird stuff happening around the periphery, because as soon as everybody gets to the outpost it goes straight into full-on wacky mode.

We’ve got a nuclear apocalypse, folks hiding out in a shelter looking like they walked straight out of like a Baz Lurhman period movie, a touch of cannibalism, some kind of monster or something in the woods and maybe the Antichrist. If you know know what to make of all that, you might be the only one.

Again, this is not a criticism. It’s just an observation.

But at least we know that now that “American Horror Story: Apocalypse” has finally kicked off, we won’t have to wait too terribly long before we start to get answers in the coming weeks.