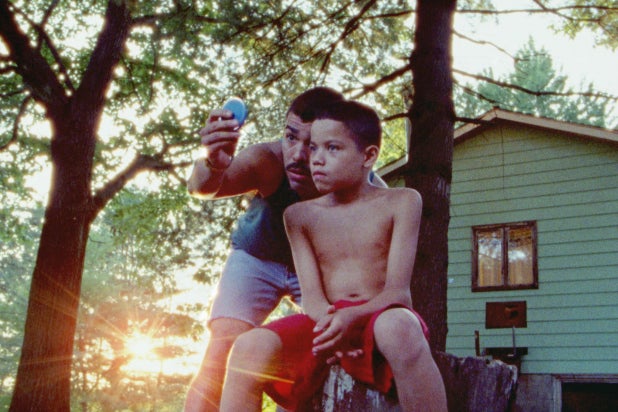 Justin Torres’ autobiographical debut novel “We the Animals” is told at first in the first person plural, and this film adaptation directed by Jeremiah Zagar uses this conceit for its narration.

“Look at us,” says our young narrator Jonah (Evan Rosado) on the soundtrack, as we see him playing with his two brothers. “When we were brothers, we wanted more… more volume, more muscles… us three… us kings… us brothers.” This narration gets largely abandoned as “We the Animals” goes on, which mimics what happens in Torres’s book when Jonah starts to separate himself from his brothers and his parents, and refers to them as “they.”

Zagar has smartly decided to tell this very subjective story of childhood with an expressionist visual style that favors saturated colors, and he often leans on an unusually suggestive and potent sound design that sometimes leads us seamlessly from one memory to the next. When Jonah’s father, known only as Paps (Raúl Castillo, “Looking”), throws him into the water to force him to learn how to swim, the sound of his panic as he sinks slowly downward blends into the sound of the car taking him home.

Also Read: The Orchard Grabs Domestic Rights to Sundance Drama 'We The Animals'

Paps and Ma (Sheila Vand, “A Girl Walks Home Alone at Night”) met when they were in high school in Brooklyn, and they went to upstate New York to look for work. Ma works in a bottle factory and Paps does security work, and it doesn’t seem like they have any friends or family. The three boys are isolated with their young parents in a house that feels closed-off from everything else around it, and so things get Freudian very quickly in their little family world.

The prototype for this kind of modern memory film is Terrence Malick’s great “The Tree of Life,” and that’s a high bar to try to clear for a director making his first narrative movie, but Zagar shows talent here, even if the shots at times feel overly showy. (There’s a POV composition from the inside of a toilet that the boys are staring into that feels like those silly shots in 1940s movies where the camera stares out from inside a fireplace.)

Zagar diligently searches for the core of the material, and this often proves tricky. Paps has a temper, and he gives Ma a split lip after a fight, yet we don’t see him hit her and we do see her physically attack him when he brings home a truck with no seatbelts. Jonah is sometimes mystified by their relationship, and that’s understandable, because he’s nine years old. But the movie itself often doesn’t seem to fully understand their relationship either.

Paps and Ma are both fairly soft-hearted, even when they try to act tough, and they still have a sexual need for each other, but they keep directing too much of their emotion onto their sons, particularly Jonah. Paps is Puerto Rican, and Ma is white, and this is made much of as a division between them. When Paps has music on, he tells Jonah, “You shake it like you’re white, like your Ma… shake it like you’re Puerto Rican!”

When Ma makes an attempt to run away with the boys, she tells them that maybe they can go to Spain, where all the guys would look like them. And there is a particularly ugly moment when Paps’s boss addresses the boys and says, “At least you’re only half as ugly as your Daddy is.”

In most conventional movies of this sort, Paps would be far more of an abusive figure and the blond boy would likely be abusive in some way too, and that’s what we wait for. But “We the Animals” is told from the point of view of a fast-maturing boy who begins to revel in his distance from his family members after being far too close to them. And so Jonah is not the victimized protagonist but the tough observer, who is strong enough to push his needy mother away when her emotional demands are too insistent.

“We the Animals” was a book that announced the talent of its author, and so “We the Animals” the film functions in a similar way for its director, who mainly passes his Terrence Malick imagery test. This movie version sometimes feels evasive or incomplete, partly because you can describe some things in a book that you cannot show on a screen, but it is in most ways an admirable adaptation that does look and sound like memories of a particular childhood.