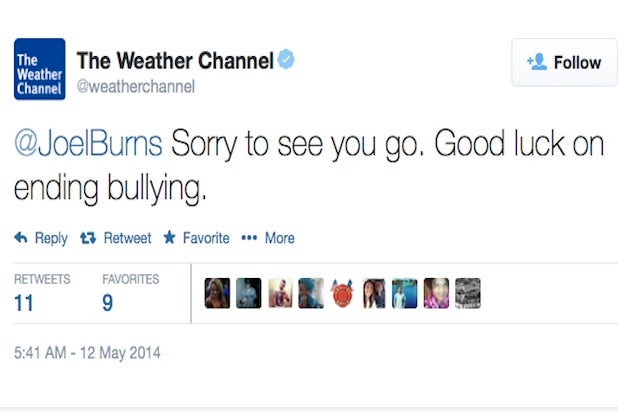 The Weather Channel said it was sorry for sending an “inappropriate” tweet to an upset viewer.

Fort Worth, Texas city council member Joel Burns complained Monday that the network’s app was showing the wrong city in its weather updates.

After silence from their social media account, Burns went ahead and deleted the app.

Burns made a famous “It Gets Better” speech against bullying that went viral in 2010. The response spurred many tweets criticizing the network for its rude response.

“How not to respond to someone who provides feedback,” tweeted one outraged Twitter user.

After the backlash, the Weather Channel reversed course and apologized.

“We apologize for our reply this morning. Our response was inappropriate & we’re taking steps to ensure it doesn’t happen again,” the channel wrote.

The channel told TheWrap it was taking action in response to the incident.

“This morning one of our team members used sarcasm in an unfortunate and unacceptable way on our Twitter account,” the Weather Channel said in a statement. “It was not our intention to offend and we are sorry that we ​did. We have since apologized to Councilman Burns​ and want to restate that sincere apology and assure him that this tweet does not represent our views. In fact, this is the opposite of how we want to interact with our fans, as we value their input on any occasion. We are taking the necessary steps to be sure something like this does not occur again.”

Dear @weatherchannel I SWEAR I’m deleting your aggravating app if you don’t STOP SHOWING DALLAS pics for Fort Worth pic.twitter.com/Rx36gZoI2K

.@JoelBurns we apologize for our reply this morning. Our response was inappropriate & we’re taking steps to ensure it doesn’t happen again.