With awards season in full swing, it’s time for two more major guilds to step up and hand out honors this weekend.

One is televised, one isn’t. One takes place in downtown Los Angeles, one in Hollywood. In one, the results are something of a foregone conclusion; the other brings with it two clear races, one with the potential to turn another Oscar category into a runaway, one surprisingly close contest, and one in which two or three of the five nominees have a legitimate shot at winning.

We’ll start with the Producers Guild of America, which takes place on Sunday at the Hollywood Palladium. This is the one that looks easy to call – because, after all, one of the main jobs of a producer is to make movies that make money. 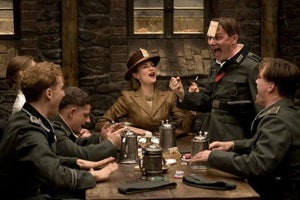 Which means one thing: “Avatar.” If James Cameron’s epic blockbuster wins the PGA’s top award on Sunday night, it won’t be much more significant than its win at the Golden Globes: That was something of a foregone conclusion, and so is this.

But if it somehow doesn’t win, stop the presses, because the Oscar race will have taken a significant turn.

The night before that, the Screen Actors Guild will showcase its wares in what will no doubt be a more star-studded show at the Shrine Auditorium, to be broadcast on TNT and TBS.

When he won the Critics Choice Movie Award last Friday, Waltz gave a speech based around the concept of making choices; when he won the Golden Globe two days later, his central metaphor was globes, planets, that kind of thing. So when he wins the SAG Award, will he structure his words around the concept of guild, or will he go straight to actor? That’s really the only suspense here.

In the lead actor and actress categories, the SAG races are more interesting. Best Performance by a Male Actor in a Leading Role seems like a two-man race between Jeff Bridges for “Crazy Heart,” who won at the Globes and the Critics Choice Awards, and George Clooney for “Up in the Air,” who took home many of the earlier critics honors.

If Bridges wins, as he likely will, the victory will cement his status as an Oscar winner-to-be; a Clooney victory would make that race a bit more suspenseful.

In the Female Actor in a Leading Role category, Carey Mulligan from “An Education” might have an outside chance – after all, her film was one of the few to send screeners to the entire membership of SAG, close to 100,000 voters.

But you have to figure that the race is probably down to Meryl Streep (“Julie & Julia”) and this season’s surprise contender, Sandra Bullock (“The Blind Side”). I’m guessing Streep and hoping for Mulligan, but you can’t underestimate the sentiment for sweetheart Bullock. And Streep did win last year, after all …

The close thing SAG has to a Best Picture award is its Outstanding Performance by the Cast of a Motion Picture award; last year this went to “Slumdog Millionaire,” signaling the depth of affection for that film and all but securing its road to Oscar glory.

Of this year’s nominees, you can pretty much write off “Nine.” “An Education” is probably a bit small-scale to woo voters, even with those 100,000 screeners. I think “The Hurt Locker” has an outside chance to steal this one, although it didn’t send screeners and its victory would certainly come as a shock.

That leaves “Inglourious Basterds” (photo above) and “Precious,” both of which sent screeners and both of which has solid shots to win an award that this year is unlikely to have much impact on the Oscars’ Best Picture race.

I’m guessing that “Basterds” will take it – it’s a bigger movie, a bigger cast, a bigger hit. And, I suspect, it needs this victory more to have any chance of picking up some Best Picture momentum, and sneaking into the top tier currently occupied by “Avatar” and “The Hurt Locker.”

And then we’ll all wait a week until the Directors Guild makes the crucial choice between the ex-spouses, James Cameron and Kathryn Bigelow.