Seventy-million-dollar openings don’t come much more ogre-ish than this.

DreamWorks Animation’s oft-renamed fourth – and final? – “Shrek” movie opened to $71.3 million in U.S. and Canada, significantly underperforming on even its underwhelming tracking projections.

Last week, a Wall Street analyst single-handedly cratered DreamWorks stock 4 percent when he suggested that the fourth “Shrek” would open to between $80 million-$100 million. 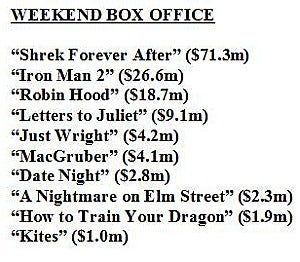 Released in 3D at more than half of its 4,359 locations, the Paramount-distributed movie – re-christened in late-April by DreamWorks marketing department as “Shrek: The Final Chapter” – was well-received by movie-goers, garnering an “A” grade from word-of-mouth tracker CinemaScore.

But on a weekend in which it had the family audience pretty much all to itself – Rogue Pictures’ low-budget “Saturday Night Live” spin-off “MacGruber” was the only other wide release – “Shrek 4” failed to deliver the huge audience size of previous franchise installments. (“Shrek the Third,” for example, opened to $121.6 million in May 2007.)

One exhibition industry official said the underperformance of “Shrek” shows that DreamWorks – which already has sequels for “Madagascar,” “Kung-Fu Panda” and “How to Train Your Dragon” queued up – has “serious strategic and philosophical challenges” it needs to address. The official requested anonymity because of his inudstry’s ties to Dreamworks and Paramount.

The proliferation of 3D pricing – which has driven up movie tickets to the $18-$20 range – is changing how moviegoers feel paying to see so many sequels at the theater.

“Moviegoers are thinking, ‘We’ve been there and done that,’” the exhibition official said. “My guess is that you’re going to find DreamWorks taking a hard look at some of their sequels going forward. When you’re talking about pricing like this, it makes a difference.”

With the overall box office up about 10 percent over the same weekend in 2009, Marvel Entertainment’s “Iron Man 2” finished second with $26.6 million and has now grossed $251.3 million domestically after three weekends.

The R-rated “MacGruber,” meanwhile, endured a disappointing $4.1 million opening. However, with the Universal-distributed comedy’s relatively tiny production budget (under $10 million) largely offset by foreign pre-sales and tax breaks, the pain for Relativity Media label Rogue Pictures is not acute. The film also benefitted from in-kind advertising on NBC, with plenty of spots running on “Saturday Night Live” in recent weeks.

“We took a shot at it, but the movie didn’t really expand beyond the ‘SNL’ audience,” said Relativity marketing chief Geoffrey Ammer.

In other box-office highlights, Bollywood-telenovela hybrid “Kites” cracked the top 10 this weekend, grossing just over $1 million.

The big box-office story of the weekend, however, remained “Shrek 4,” which grossed $4.9 million at 194 IMAX locations. To put that in perspective, “Avatar” opened to $9.5 million at 179 IMAX locations in December.

Despite the disappointing opening, however, studio distribution officials suspect “Shrek 4” will enjoy strong playability similar to “How to Train Your Dragon,” which also sent DreamWorks stock spiraling in late March went it opened to only $43.7 million.

Also buoyed by an A CinemaScore, that film has since recovered to gross more than $210 million domestically.

“I believe that at the end of the day they’re going to do $300 million-plus on ‘Shrek,’” said a rival-studio official, who declined to be identified as is customary when talking about other studios. “They’ve got nothing in front of them (in terms of 3D competition) until ‘Toy Story 3’ (premiers June 18).”

The fourth “Shrek” also has the bulk of its international distribution in front of it, with most of its foreign dates beginning in June.

Shot for over $200 million, profitability won’t be an issue once those totals start to roll in. However, as part of a franchise that’s grossed over $2.2 billion across the first three movies, expectations are high.