Warner-New Line’s 3D film "The Final Destination" bolted strongly out of the gate on Friday, and its weekend take is projected to be $28.3 million, according to studio estimates.

The "Final" tally ranks atop a domestic box office that featured R-rated films in the top four for the weekend.

And with total domestic box-office receipts coming in at around $122 million vs. about $100 million for the same weekend last year, this summer movie season will now officially finish as the best summer on record. (See TheWrap’s summer box office analysis: Twitter, 3D and ‘The Hangover’ Win.)

Headed into the weekend, the summer take stood at $3.99 billion; last summer’s haul was $4.02 billion, led by "The Dark Knight."

And it’s not over. Labor Day this year falls on the late date of Sept. 7, thus extending the season — which began on May 1 — by a full week.

"Destination’s" 1,678 3D venues — which made up nearly half of its total 3,121 engagements — accounted for 70 percent of total box-office gross, an amazing sum and proof once again that 3D is something studios can finally believe in — if only  they had the theaters to house all of their titles.

The $28.3 million beat the other debuting scarefest, The Weinstein Company-Dimension’s Rob Zombie-directed "Halloween II," which came in third with projected three-day total of $17.4 million.

Landing in the middle was TWC and Universal’s "Inglourious Basterds," which held up well — dropping 49% — and grossed another $19.6 million. That brought the film’s total to $73.3 million, a performance that continues to burnish the reputation of Harvey-and-Quentin-are-back drama since Cannes. 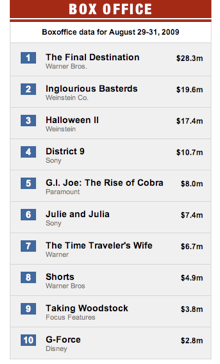 million sci-fi acquisition, the Peter Jackson-produced "District 9" finished in fourth place with another $10.7 million and is now up to a total of $90.8 million.

Universal could not have been thrilled with the weekend’s other studio premiere —  Focus Feature’s Ang Lee-directed "Taking Woodstock," which finished in ninth place with a projected weekend take of $3.8 million. The studio had predicted an opening of between $3 million to $5 million.

While the theme of the weekend is definitely death and dismemberment, the big story is "The Final Destination," which clearly defied tracking predictions that set it for the high teens to low 20s.

"We beat all studio projections, and 70% of the box office came from 3D screens," said Warner Bros domestic distribution President Dan Fellman. "We are well-positioned with the four-day Labor Day Weekend."

With 1,678 locations charging premium 3D ticket prices, the fourth "Destination" enjoyed by far its four-film, nine-year-old franchise’s biggest opening, outpacing 2006’s "Final Destination 3" (which opened to $19.2 million on the way to a $113.3 million global take) by more than $10 million.

The fourth installment was the most expensive to produce, $30 million, according to several executives at rival studios. But the franchise seems to be growing with each successive movie. The first film about young folks dying freakishly before their time, 2000’s "Final Destination," opened to just $10 million.

For their part, Dimension and the Weinstein Company didn’t come close to the $26.4 million opening they enjoyed in 2007 for their reboot of the 31-year-old "Halloween" franchise, which now spans eight films and countless awful onscreen murders.

However, production costs on "Halloween II" came in at around $15 million, so don’t look for ageless psychopath Mike Myers to end his killing spree anytime soon.

Happily for studios that spent big on ambitious tentpoles, the extended summer season should bring them to profitability.

Parmount, for example, saw its "G.I. Joe: The Rise of Cobra" finish in fifth place this weekend, adding a projected three-day total of $8 million and bringing the $175 million action picture’s four-week domestic stash to $132.4 million. Foreign receipts were at around $125 million going into the weekend.

On the indie front, Fox Searchlight is beginning to wind down summer romantic comedy "500 Days of Summer," which added $2 million over the weekend at 79 fewer venues (909 total) and has now grossed $25.2 million.

Meanwhile, Searchlight’s "Post Grad" took in $1.5 million during its second weekend playing at 1,959 theaters and is now up to $5.3 million.