The shrapnel of those reprehensible “things” continues to fly months after the film’s release. The FBI’s investigation of Weiner for inappropriate text messages he sent to a minor created an email trail from his computer to his wife, Huma Abedin, who is Hillary Clinton’s top aide. And what Clinton does not need is more email trouble.

While Weiner the man has become a bit of a morbid spectacle, “Weiner” the documentary is not.

More unfortunate — actually, call it stupid — is one of Weiner’s explanations of what happened. “These are people you’re friends with,” he tells the directors. “You’re, like, pen pals with.” Sounds innocent enough. Except normally you don’t send photos of your genitalia to your pen pals.

Let’s get those of you unfamiliar with the controversy up to speed: In 2011, Congressman Weiner tweeted a close-up photo of his bulging underwear. He claimed that his account must have been hacked, then admitted that he did it. He said he wouldn’t resign, but then he resigned. And all the while, Abedin — coincidentally, a longtime Hillary Clinton aide — stood by her man. 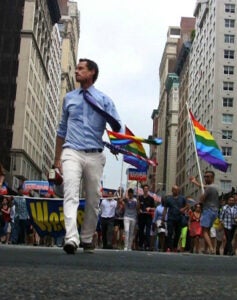 “Weiner” picks up two years later. After his comment about doing the “things” (he always generalizes or steps around it here), the Democrat is shown in his heyday, with a particularly go-get-‘em clip featuring a fiery speech he gave in the House regarding Republicans voting against legislation that would have benefited 9/11 first responders. All seems to be forgiven when Weiner fires up his mayoral campaign, with a large staff and enthusiastic receptions from crowds when he attends parades, rallies, or just stakes his claim on a street corner to get out the vote.

Well, maybe not everyone forgave him: From the first shot in Weiner’s home, Abedin looks miserable, clearly not wanting the camera there. It might be a privacy thing, but more likely it’s because she knows that if the Internet never happened — or if her husband of almost a year didn’t have a thing for anonymous young women — there wouldn’t be a film.

Kriegman and Steinberg’s incredible access allows you to ride the whole roller coaster, however, and that does include moments when Abedin advocates for Weiner and beams about his political skill and unrelenting devotion to helping the middle class. She’s happy, he’s happy, momentum is building — and then another bomb drops. When Weiner resigned, he pledged to the public that he’d change his ways. But then came more photos, brought into the spotlight by a 23-year-old who milks every second of her 15 minutes.

Your stomach sinks. You wince when Weiner’s communications director presses him about whether there were multiple women or just one. You feel the heartbreak and borderline disgust when Abedin’s scowl returns.

The palpable highs and lows are, again, to the credit of the directors as well as Weiner and his wife. He knows it was a shaky decision, saying at the start of the film, “This is the worst. Doing a documentary about my scandal.” Or is that hangdog moment only another front by a deft politician?

Regardless, Weiner boasts a Bill Clinton slickness. (At least to viewers, if not voters, since he’s obviously not mayor of New York.) Hate the sin, love the witty, nimble-minded, self-deprecating sinner. His personality isn’t the only source of entertainment here, though, with amusing details peppered throughout, such as a reporter’s inanity during an interview (“Your brother said your father never hugged you”) or the seemingly endless New York Post headlines punning his media-gold last name (“Obama Beats Weiner”).

Of course, you don’t have to dig much deeper to recognize the playing out of yet another example of personal versus public when it comes to a politician’s sexual dalliances. If Weiner had indeed run for office before the days of Twitter, text and hungry round-the-clock news networks, he would have had a much better shot of voters focusing on his views and not his predilections. It’s tough to be reminded that this promising politician had been taken down because of photos and online chats. Or are these lapses in judgment reflective of poor professional decisions to come?

Not all of his constituents held his second humiliation against him, though. One woman, for example, attempts to speak for her whole borough: “We don’t care about his personal garbage,” she says. “We’re from the Bronx.”