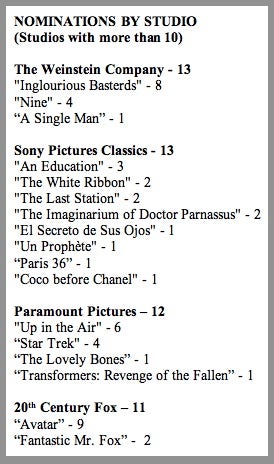 Sony Pictures Classics and The Weinstein Company each garnered 13 nominations, the most for individual movie companies, on Tuesday morning, proving once again that size doesn’t always matter in the Oscar race.

In a record for the indie, Sony’s arthouse arm grabbed major nominations for "An Education," "The Last Station," and even "The Imaginarium of Dr. Parnassus," and several more for foreign language categories. That compared to only 5 for big Sony, which took four for the edgy science fiction parable, "District 9," and one for Meryl Streep in "Julie & Julia." 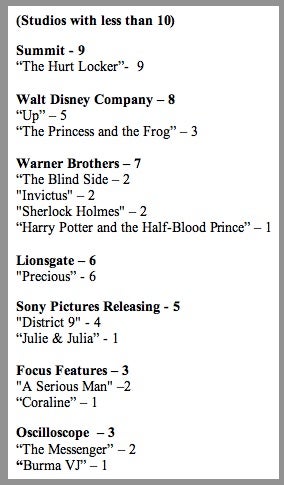 eight for the much-lauded Tarantino, "Inglourious Basterds," and another four for "Nine," which so far has not taken hold at the box office.

Paramount came in second, with 12 nominations, led by its favorite, "Up in the Air."

If one added arthouse divisions with the parent company, Sony arguably swept the most nominations – 5 for big Sony, and another 13 for Sony Pictures Classics – for a total of 18.