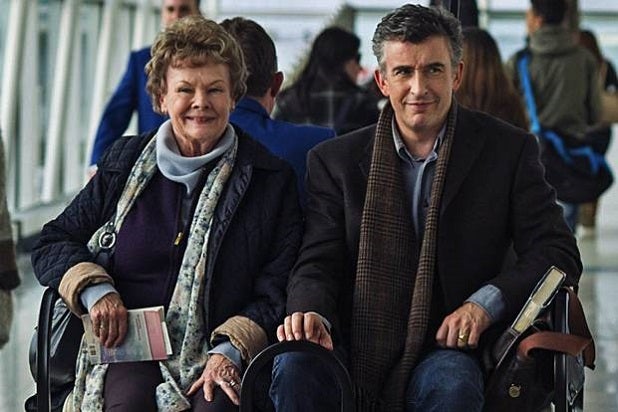 The Weinstein Company’s aggressive bet on “Philomena” looks to have paid off.

TWC expanded the British drama, directed by Stephen Frears and starring Judi Dench, into 835 theaters after opening it on just four last weekend and it took in $4.6 million to crack the top ten at No. 9. That’s a healthy $5,508 per-screen average.

‘We decided to go this wide with it fairly late,” Weinstein’s distribution chief Erik Lomis told TheWrap. “We were thinking the Wednesday and Thursday shows were like sneaks, where we just wanted to get the picture out there and let the word of mouth kick in, and that’s what happened.”

“Philomena” has a 93 percent positive rating on Rotten Tomatoes, and audiences were in line with the critics, giving it an “A” CinemaScore.

“We did exit polling and 85 percent gave it a definite recommend, so we’re really encouraged” Lomis said.

Steve Coogan co-wrote and co-stars with Dench in the real life story of a woman searching for the son that was taken from her decades earlier.

TWC got more good news with the opening of “Mandela: Long Walk to Freedom,” which it opened on four theaters in New York and Los Angeles. It took in $100,306 for a $25,077 per-screen average, the best of any film in the marketplace.

Idris Elba stars as the iconic South African statesman in this PG-13-rated tale that follows his journey from childhood in a rural village to his inauguration as his country’s first democratically elected president. The U.K.’s Justin Chadwick directs and Naomie Harris and Terry Pheto co-star.

Paramount Vantage expanded the Alexander Payne-directed “Nebraska” from 28 to 102 theaters and it brought in $900,000 over the five days.

That’s an $8,823 per-screen average for the film, which stars Bruce Dern as a cantankerous father who thinks he’s struck it rich ad reunites with his son (Will Forte). June Squibb, Stacy Keach and Bob Odenkirk co-star. Its overall total is up to $1.4 million after four weeks.

Matthew McConaughey‘s “Dallas Buyers Club” went from 666 to 696 theaters in its fifth week and took in nearly $2.6 million. That’s a solid $4,159 average for the Focus Features AIDS drama that co-stars Jared Leto. Its domestic total is $10.2 million.

Fox Searchlight’s “12 Years a Slave’ became the year’s highest-grossing English-language platform release, after taking in a little more than $3 million from 1,165 theaters, down from last week’s 1,474 locations.  That pushed its overall domestic gross to $33.1 million, ahead of Woody Allen’s “Blue Jasmine,” which has taken in $32.7 million.

The Robert Redford sea saga “All Is Lost” brought in $196,750 from 51 screens over the weekend for Roadside Attractions and Lionsgate to raise its domestic total to $5.2 million.

Director Paolo Sorrentino’s “The Great Beauty” — Italy’s foreign-language Oscar submission — brought in $139,000 from 23 screens, up from three last week, for a healthy $6,043 per-screen average. The Janus Films release has brought in $261,000 overall.