Say what you like about Harvey Weinstein. But when it came to marketing “Inglourious Basterds,” he hit it out of the park. The movie beat even the highest box office projections by more than $10 million.

That’s worth a closer look.

Here are the raw elements: A period film. Mainly in French and German. With subtitles. An ensemble cast of mostly Europeans. And more than two and a half hours long. Not exactly the makings of a summer blockbuster hit.

But thanks to some very savvy salesmanship, you wouldn’t have known any of that from the poster, the trailer or any of the cast interviews. That looked like raging, rocking, Grindhouse-meets-Saving Private Ryan. 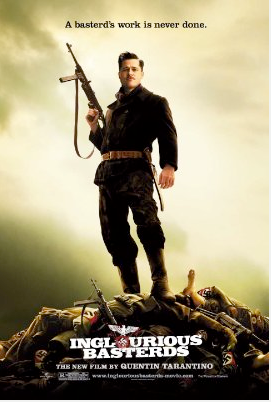 The trailer was all about Aldo Raine (Pitt) indoctrinating his band of Jewish soldiers in the cult of brutality (scalping! cool!) they intend to impose on the Nazis.

But in reality, that’s a minor piece of the film.

Instead, Tarantino has made an extremely sophisticated World War II fantasy, layered with rich characters, taut dialogue and (in my book) at least two scenes that will be written about in cinema study classes (the opening scene, and the one in the bar; if you haven’t seen the movie I’m not going to ruin it for you).

Brad Pitt is in neither of those scenes. Dirty little secret: Pitt is in barely one third of the film.

But the Weinsteins needed young males to open this movie. And so they pulled a brilliant bait and switch, selling the movie on Pitt’s stardom and Tarantino’s slice-and-dice reputation from severed ears in "Reservoir Dogs" to piles of samurai-ed corpses in "Kill Bill." (Not to mention "Grindhouse.")

“We had two very marketable elements — Quentin and Brad Pitt,” Tom Ortenberg, president of theatrical marketing at The Weinstein Company, told me on Sunday. “We wanted every bit of marketing we put out there to have elements to tell the message that this film kicked ass, with some gallows humor.”

But here’s the thing about good filmmaking. Audiences that went to the movie expecting to see Brad Pitt rampaging across Europe were not disappointed. They were rewarded with a good story and interesting characters — though not what they were sold in advance.

Exit polls were high, the Cinemascore was A-. Score one for good story-telling.

My 15-year-old son went on Friday afternoon with a bunch of his pals; they were expecting rock-and-roll violence. They didn’t get it. “It wasn’t what we expected,” said Jeremy. “But it was a really good movie.”

And it seems pretty clear that a “Twitter effect” at the box office helped propel the word of mouth to a much higher box office total — nearly $38 million — than was anticipated. That is happening every weekend now: Good films get a boost from Twitter. Bad films sink faster than ever. 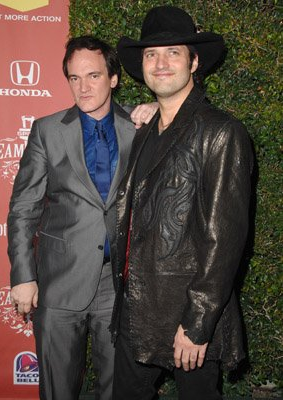 Which reminds me: With Tarantino’s success this weekend, it’s hard not to notice the failure of the film of one of his oldest chums, Robert Rodriguez. "Shorts’" opened in almost the exact same number of theaters as “Basterds” (3,100)  and took in a sad $6.6 million, with a $2,126 per screen average, according to Hollywood.com.

That film is the first and last collaboration between Warner Bros and the Abu Dhabi Media Company’s Imagenation film fund. The deal, I’ve confirmed with Warner Bros, has evaporated.

Perhaps Rodriguez could use a little of that Harvey marketing magic.