With “The Princess and the Frog” winning rave reviews and “Fantastic Mr. Fox” popping up on 10-best lists, it’s time to lobby for “Mary and Max,” one of the strangest, funniest films of the year and an oddity that stands out in what has been a good year for animated features.

Made in Australia by Adam Elliot, who won an Oscar for his short film “Harvie Krumpet” six years ago, “Mary and Max” is a twisted claymation film defiantly not for kids. Mary (voiced by Toni Collette) is a lonely eight-year-old girl from the Melbourne suburbs with an alcoholic mother and classmates who bully her; Max (Philip Seymour Hoffman) is her inadvertent pen pal from New York City, a overweight Jewish man with Asperger’s Syndrome and a yen for chocolate hot dogs, a recipe of his own invention. Their unlikely friendship is brilliantly weird and very funny, with remarkable vocal performances from Hoffman, Collette and narrator Barry Humphries, among others. (The film is now available on Video-on-Demand through IFC.)

When I mentioned “Mary and Max” to “Coraline” director Henry Selick, his reaction was immediate: “It’s a stupendously powerful movie, and Adam is a pioneer.”  But the 37-year-old Elliot prefers to keep Hollywood at arm’s length, he said in a recent conversation. 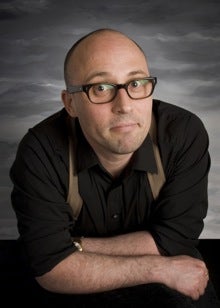 There’s a title card at the beginning of your film says “Based on a true story.” How true can it be?
All my films have been based on my family and friends and the people around me, but until this film I’ve never actually put that card at the beginning of the film. But this one is almost a documentary. I do have a pen friend in New York who I’ve been writing to for more than 20 years. He does have Asperger’s, he is a big man, he is Jewish, he is an atheist.

And Mary … Well, I suppose Mary is me. Her environment was very similar to my own childhood experience. My father’s name is Noel, but he didn’t work in a teabag factory and he didn’t die by being drowned by a tidal wave. So it’s a blend. I always use the expression "don’t let the truth get in the way of a good story."

So Mary’s feelings of being an outsider come from you?
Oh sure. I think everybody’s gone though that kind of loneliness. But for me, particularly, I’ve always felt like I don’t fit into any particular social group. Even now, as a filmmaker, I feel like I’m on the fringes. Especially because I live closer to Antarctica than any other continent. I don’t belong to America, I don’t belong to Europe, I’m this person in Australia making these claymation films, which no one else is doing down here.

After you won the Oscar for “Harvie Krumpet,” I would imagine that if you wanted to come over here, go to lunch with John Lasseter and become a part of the animation community, you could have. Is there something in you that likes being on the other side of the world, the one guy in Australia doing what you’re dong?
Well, from “Harvie Krumpet” I learned that bring different is not a bad thing. Being unique can actually be quite an advantage. I think that’s one of the reasons we won the Oscar. And of course I’ve gotten to travel, and I got to go to Pixar and Disney and DreamWorks and also to a lot of animation festivals in Europe, and they are very respectful and very embracing of my work. So I’ve stopped worrying about trying to fit in. 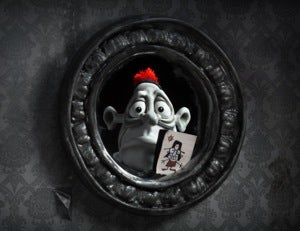 Were there big challenges in making the move from short films to a feature?
There were so many. If I had known there were going to be so many, I don’t think I would have done the film. I went into it very naïve, with a very small budget. We only had eight million Australian dollars, which is tiny, pathetic, almost tragic to spend compared to some of the other animated films out there. I feel like I wasn’t the director of the film, I was the ringmaster of the circus. There were days of anarchy and controlled chaos, and we didn’t even have the resources and the wonderful facilities that these other studios like Aardman and Laika.

(laughs) I visited where “Coraline” was made, at Laika in Oregon, and I was so depressed at how fantastic their facilities were. But in Australia we punch above our weight, let’s put it that way.

My understanding is that the initial drafts of “Mary and Max” were much tamer than the eventual script.
All my first drafts are very sort of confuzzled, as I say. I don’t obsess with plot in those early stages. I obsess with detail, which is sort of a backwards way of doing things. I start with the details, and hope that by the third or fourth draft the plot magically appears. I’m obsessed with human nature and human idiosyncracies, and that’s really where it all starts. I always believe that if you start with that, all that stuff that’s in scriptwriting books will come.

How you’d attract your cast?
Well, Toni is Australian, of course, and she was very eager to get involved. Eric Bana just lives down the road from me. But Barry and Philip were much harder to get. It took us a year to get Philip, because he is so busy, and he has the barrier of managers and agents. Also, he was not particularly interested in animation. But he was always at the top of my list – and a few perfumed letters later, we finally got the script to him. And once he read the script, it was instant. He hadn’t seen any imagery, but he said yes. For me, that was probably one of the most rewarding aspects of the whole process.

How lengthy was that process?
Five years, from script to screen. I did all the storyboarding myself, that was six months. The script was another year and a half. The actual physical shoot went for 57 weeks. Post was probably four to six months. It all blends in animation. But yeah, pretty much after “Harvie Krumpet” and the whole Oscar circus had settled down, I just got back into work again. Hopefully the next one will be a bit quicker. 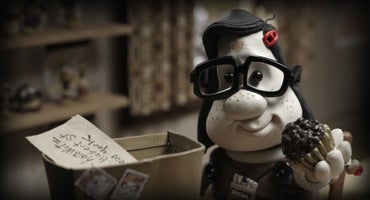 What was that Oscar experience like?
It was very unexpected. Even my parents didn’t think we were going to win. It was a shock to the system, but I think Disney [who had the nominee “Destino”] was more shocked than me. The Oscar experience had moments that weren’t terribly enjoyable – but look, it did change my life. I doubt very much I would have gotten to make “Mary and Max” without having won the Oscar.

It brought a lot of privilege, it brought a lot of opportunity. It also brought a huge amount of pressure and expectation – and really, it killed my social life for the last five years. I worked seven days a week on the film. I barely saw my family. But I think it was all worth it. “Mary and Max” is not going to make me rich, but it’s done very well at festivals all around the world, and of course the Oscars are coming up and we’ve got a slim chance, I think, but a chance nevertheless. I try not to think about it too much.

But you must have thought about it when the category expanded from three nominees to five.
Oh, that was a huge relief when we found out. I don’t think we could have made it in otherwise. It just feels like “Up” and “Coraline” and “Fantastic Mr. Fox” and “Ponyo” … it’s such a strong year. And unfortunately, we just don’t have the marketing budgets that those big studios have. I heard through the grapevine that Pixar took the members of the Hollywood Foreign Press up in hot air balloons. (laughs) We sent out an email. That’s our campaign.

“Mary and Max” will certainly stand out if voters watch it, because it’s clearly a movie for adults, not kids. As a filmmaker who works in animation, do you get pressure to make children’s movies instead of strange adult ones?
Oh, sure. Not so much here in Australia – but when I go to Los Angeles to see my manager, he’s always hoping that I’ll say, “You know what? I’ve decided to sell out and take whatever you can get me.” After “Harvie Krumpet” there were a lot of offers to from Hollywood to work on other people’s projects, or direct other people’s scripts. But I know that two or three days into whatever the project is, I would get bored. I’m too selfish. I’m really only interested in telling my own story.

Maybe it’s an ego thing, I don’t know. I often wonder, Why am I doing this? Why aren’t I taking these big offers? But when I was at Laika, we screened the film in their theater, and afterwards I said, “You know, there’s days when I really think I should take the money and run.” And three people in the audience screamed, “NO!”
I think it all comes down to creative control and freedom. I love standing at the back of a cinema with 300 people watching a film I spent five years making, knowing that I didn’t have to change the ending, I didn’t have to homogenize anything, I didn’t have to water anything down. It’s more like a painting, I suppose. I had all these collaborators, but at the end of the day it was the painting that I wanted to paint. If that makes sense.