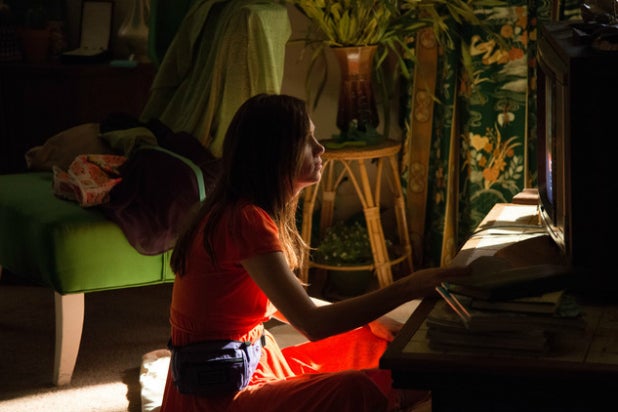 You’ve got to hand it to Kristen Wiig: Any number of actresses would have parlayed the success of “Bridesmaids” into a string of very similar comedies and cashed a series of checks for movies that got less and less interesting. Instead, the former “SNL” star has seemingly gone out of her way to find complex, damaged and interesting characters to play.

The movies themselves have been a very mixed bag — I loved “The Skeleton Twins” and suffered through “Girl Most Likely” — but no one can accuse Wiig of playing it safe, certainly not in her latest, “Welcome to Me.”

While Wiig’s mentally-ill narcissist makes for another captivating entry in her gallery of complicated women, the movie itself doesn’t seem entirely sure about what to do with her. Director Shira Piven (“Fully Loaded”) and screenwriter Eliot Laurence (Logo’s “The Big Gay Sketch Show”) fall into the trap of so-many contemporary comedies, unleashing satirical bite and bile and then bringing out the cuddles and the learning so nobody feels like the movie ever got too mean. It’s a wishy-washy bait-and-switch committed all too often these days, and the shift in the film’s tone and its treatment of the characters (particularly Wiig’s) ultimately just feels like a cop-out.

Alice Klieg (Wiig) lives in a shabby little apartment in the California desert, one where the TV is always on. Living on disability because of her personality disorder — which requires weekly sessions with her ever-patient therapist Dr. Moffat (Tim Robbins) — Alice’s life revolves around her obsession with Oprah, from the media mogul’s monthly magazine to the stacks and stacks of VHS cassettes featuring old episodes that Alice can recite by heart.

Alice also buys lottery tickets, and early on in the film, she hits an $86 million jackpot. After sitting in the audience for a terrible infomercial hosted by Gabe (Wes Bentley), Alice realizes that she needs a show of her own, just like Oprah’s, except that there will be no guests and it will be completely and entirely about Alice’s life and her thoughts and feelings, as well as special segments in which she will call out all the people in school who ever wronged her. Also, she will enter on a swan.

Gabe’s brother and production partner Rich (James Mardsen) realizes that this is lunacy, but with a struggling business, he’s in no position to turn down a woman who can write a $15 million check on the spot. Over the objections of producers Dawn (Joan Cusack) and Deb (Jennifer Jason Leigh), “Welcome to Me” goes into production, with Alice rambling and crying when she’s not sharing horrifying recipes like meatloaf cake with mashed potato frosting.

Of course, we’re meant to laugh at the fact that she can’t pronounce “carbohydrates,” and at her on-air segments where she neuters dogs, and at the horrible way she treats her friends and family (played by, among others, Linda Cardellini, Alan Tudyk and Mitch Silpa). “Welcome to Me” wants to eat its meatloaf cake and have it, too, mining the sight of a suddenly-wealthy, unbalanced, off-her-meds woman imploding on television, using her to score points about media-age self-absorption, and then bringing us all back around to a redemptive ending where we’ve all learned something. It’s the equivalent of tripping someone on crutches and then inviting her over for tea.

Also Read: 'Avengers: Age of Ultron' Reviews: Come for the Spectacle, Stay for the Characters

Piven (sister of Jeremy, wife of Adam McKay) has certainly put together a cast (that also includes Thomas Mann, Loretta Devine and Rose Abdoo) that can make even the very smallest roles pop. But this is Wiig’s show all the way, and it’s only the delicacy and grace that she gives the character that keeps “Welcome to Me” from being even more of a leering freakshow than it already is.

There’s a sketch, or a short film, or even an Adult Swim series to be mined from these characters and situations, but as a feature film, “Welcome to Me” comes off like taunting followed by hugs, where neither feels genuine.