HBO’s drag makeover series “We’re Here” is not about putting on a show. At least, not entirely.

Yes, the show does put people in drag and have them perform a number with three fan-favorite “RuPaul’s Drag Race” alums. And, okay, yes, one participant in the first episode does express interest in pursuing a career in drag. But the wigs and the heels and the makeup are not the point, the show’s stars and producers say. The person who exists beneath all that, and the life they go back to when they step off the stage, that’s the point.

“It never felt to me like [the drag] was the most significant part of it,” said series director and showrunner Peter LoGreco. “There’s having the courage to take that leap. But to me, it’s more about what taking this leap could mean for their own lives … Why is this important for them as a person, beyond just getting dressed up?”

Co-created by Stephen Warren and Johnnie Ingram, each episode of “We’re Here” sees Bob the Drag Queen, Shangela and Eureka O’Hara traveling to a different part of small-town America. They partner with a local, get to know them and their families and provide a crash course in show(wo)manship. It all culminates in a glitzy one-night-only lip sync performance, complete with dancers and costumes and the occasional guest appearance.

But “We’re Here” does not dwell on scenes of the fledgling queens doing things like tucking for the first time or learning to walk in heels. In fact, the majority of the show sees the queens out of costume, spending time with their drag daughters and getting to now them person-to-person. Whether that’s a young queer man feeling trapped in his hometown or a mother hoping to reconnect with the daughter she had a falling out with or a straight father looking to challenge his own ideas of masculinity. 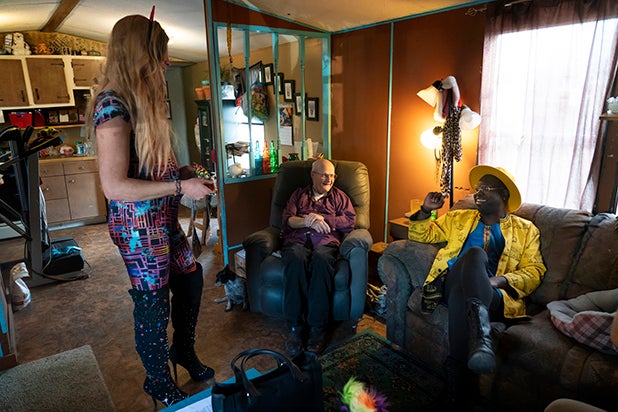 It’s a different side of Bob, Shangela and Eureka than what fans got to see on “Drag Race,” but the trio adapts well to the role, and to hear them tell it, it’s a natural fit.

“The majority of my life is not competing on ‘RuPaul’s Drag Race,’ so if anything, that was unusual,” Bob said. “This is just interacting with people as a human, which is what I’ve been doing for 33 years now. So it didn’t seem weird at all.”

“At first, I was a little worried,” added Eureka. “I do like to give advice — I’m better at giving it than taking it — but I was nervous at first. I was like, ‘Oh, my God, I’m not a psychologist, I’m gonna try to help these people and end up f—ing them up‘ … but I kind of live and thrive off my interactions with people; it’s kind of what I was built for. And I didn’t realize it until I started doing the show.”

All three are originally from small towns themselves, and each said they can relate to the experience of feeling out of place in your hometown. “Looking around, I never saw anyone that I thought was like me,” said Shangela, who grew up in the 25,000-person city of Paris, Texas. “I was a small, gay black kid in a very rural community. Even in television and film, I didn’t see anyone that was out and flamboyant, a little boy doing Beyonce choreography.” 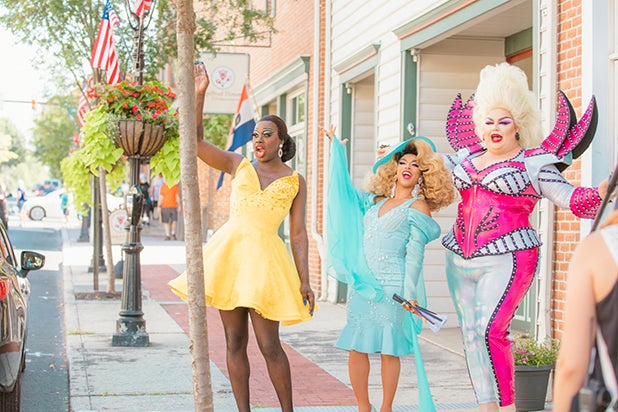 “We’re Here” takes its title from the LGBTQ activist organization Queer Nation’s famous chant from the 1990s HIV/AIDS protests: “We’re here, we’re queer, get used to it.” So while it can be interpreted as a rowdy greeting from three larger-than-life personalities crashing a small town in showgirl costumes, it can also be read as a raise of the hand, a reminder that queer communities and outsiders of all stripes exist — and have the right to feel welcome — in all parts of the country.

“It extends to anyone who doesn’t feel seen. Anyone who feels like their voices aren’t being heard in the mainstream,” said Warren. Added Ingram, “We’re coming into your town and we’re putting on a drag show, and we’re going to bring you into our world and we’re going to tell your story to your community through this counterculture.” 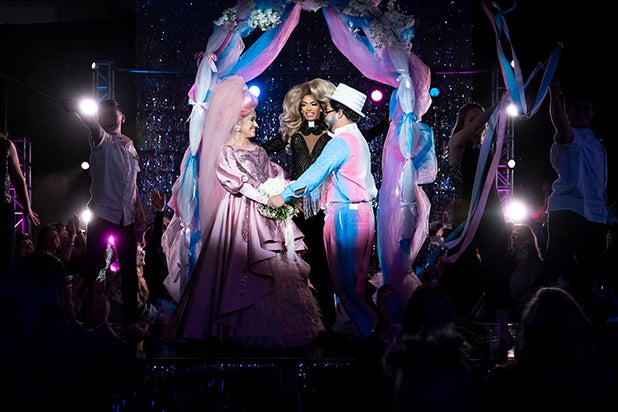 These are all things that drag has already been doing for decades, but with its recent explosion in popularity (thanks almost entirely to “RuPaul’s Drag Race”) drag is ready to move beyond counterculture and leverage its confrontational roots during this moment of mainstream attention.

“We’re Here” is not a conflict-driven show, but there is something inherently imposing about a drag queen who stands about seven-feet tall in full get-up showing up at your local diner and forcing you to reckon with the reality of their existence, says LoGreco.

“Once someone is faced with the actual person of Eureka or Shangela or Bob, and they see this person, who they know, wanting to participate in something like this with them, that can really change their perception,” he said. “You can disarm anyone when you’re in chaps and a rhinestoned cowboy hat and carrying a whip and just kind of own it.”

Still, the show is not out to change the world overnight.

“We’re not fairy godmothers. We can’t come in, wave a wand and, yay, everything is great,” said Shangela. “Our job is to come in, partner with these people and go on that journey of self-realization with them. How much strength do you really have? Let’s dig for it. And then through the art of drag, let’s showcase it.” 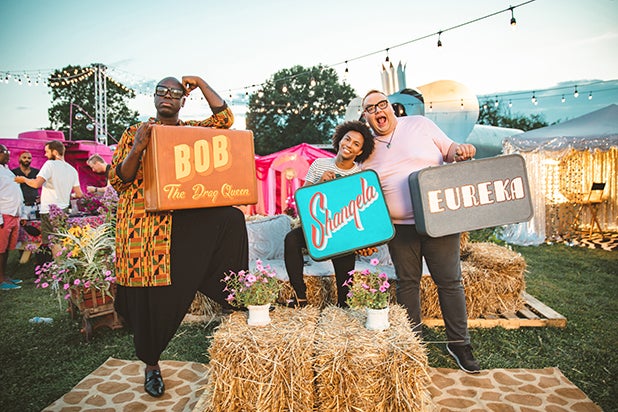