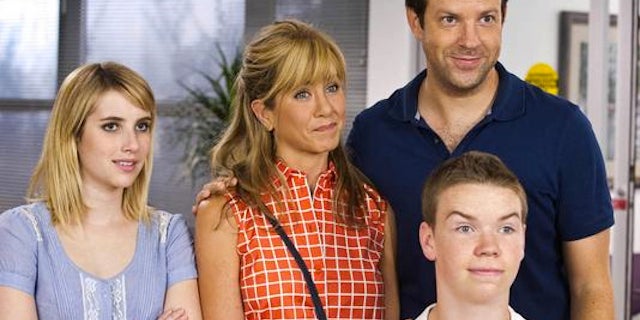 "We're the Millers" is expected to be a modest box office hit for Warner Bros., but it's not a hit with critics.

The Jennifer Aniston and Jason Sudeikis comedy, directed by Rawson Marshall Thurber ("Dodgeball"), has accumulated a majority of bad reviews, according to its current 30 percent "rotten" rating on critics aggregator Rotten Tomatoes.

Also read: Jennifer Aniston Is Due for a Hit – 'We're the Millers' Looks Like One

The raunchy road trip movie is about a Denver pot dealer (Sudeikis), his stripper neighbor (Aniston), a teenage runaway (Emma Roberts), and neighborhood nerdy virgin (Will Poulter) posing as a family on vacation in an RV, which they plan on loading up with hundreds of pounds of marijuana once they're south of the American border. The plan, of course, goes the awry along the way and trailers make it perfectly clear that the fake family will face a number of obstacles — one of which requires Aniston to strip down to her underwear and dance seductively in slow motion.

Despite the premise, TheWrap's Alonso Duralde advises curious comedy fans to steer clear of this "long, black ribbon of boring."

"It took four writers to labor over this unremarkable piece of work, and somehow not one of them could figure out a way to mine laughs from a tarantula biting a teenager’s scrotum," Duralde complained. "Director Rawson Marshall Thurber shows no feel for timing, with scenes running well past their point of expiration and the movie as a whole lasting a seemingly endless 110 minutes. At a total of 15 respectable laughs, that’s a sad average of one chuckle every seven or eight minutes."

"The underlying idea is that in pretending to be a family, the Millers will actually become a real family. The comedy is embedded in all the various conflicts they're forced to work through," Sharkey wrote. "Unfortunately, many of the jokes implode."

For Vulture critic Bilge Ebiri, the humor was as bland as the character Sudeikis plays.

"What the movie needs is someone who can effectively convey a hint of the degenerate — Melissa McCarthy, say, or Jim Carrey in his prime. And in Sudeikis’s case, quite aside from not being particularly funny, he also doesn’t convince on any level," Ebiri wrote. "The result is a loose conglomeration of jokes that never really holds together: Funny in parts, but overwhelmed by the bland emptiness where its protagonist should be."

While the biggest complaint in negative reviews appears to be the spotty laugh-out-loud humor, the positive reviews are okay with the joke-to-laugh ratio.

Entertainment Weekly's Chris Nashawaty, for example, found the raunchy humor to be "delightfully lewd," while giving major props to both Sudeikis and Aniston's comedic timing.

"Before it fizzles out with a predictably redemptive ending, 'Millers' serves up some delightfully lewd laughs, such as Roberts teaching her ''brother'' how to kiss as ''Mom'' and ''Dad'' cheer her on," Nashawaty wrote. "While Aniston shows that she's as deft on a stripper pole as she is with her sitcom-honed timing, Sudeikis wields his smart-ass sarcasm like a barbed weapon. And more often than not, it kills."