When the news came out that Werner Herzog planned on remaking Abel Ferrara’s 1992 cop drama "Bad Lieutenant," the film community was collectively befuddled. Why would a veteran of the German New Wave bother with a gritty New York City noir that has limited appeal in the first place? 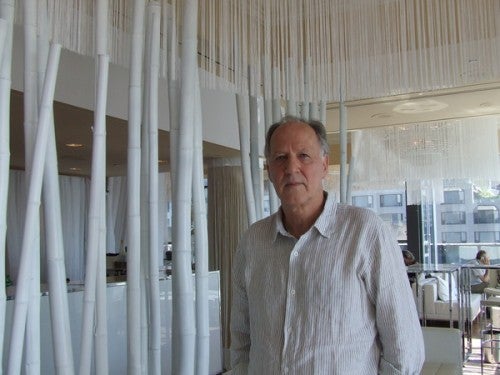 As it turns out, Herzog never saw the original movie, nor did he care about it. Producer Edward Pressman originally got the idea for a remake, but Herzog’s new movie — which stars Nicolas Cage as drug-addled investigator and premiered at TIFF earlier this week — shares almost nothing other than the title with its predecessor.

Still, Herzog felt the need to speak out against skeptics of the project in the press notes for his production, titled "Bad Lieutenant: Port of Call New Orleans." In the notes (excerpted below), Herzog decries "the pedantic branch of academia" that "will be ecstatic to find a small reference to that earlier film here and there."

On Tuesday, I sat down with Herzog and asked him why he felt compelled to issue an official statement on the matter. "In the speculation preceding the release of the film, before anyone had seen it, there were already complicated comparisons between Ferrara and me," he said in his distinctive baritone. "I’ve never seen any of his films and I don’t know who he is. That kind of academic thinking is foreign to me. These parallels do not exist."

I pointed out to him that it sounded like he was complaining about a media problem rather than an academic one. "So be it," he said. "It’s not my problem; it’s their problem. It got out of control very easily, but it will die away as the film hits the screen."

When Ferrara was fuming to the press about his disdain for Herzog’s production, he wondered aloud if Herzog would mind him remaking the German filmmaker’s classic "Aguirre: Wrath of God." So I asked Herzog about that, too. "Let him do it," he said. "He would never manage to do it. No one would ever manage to do that one."

An undeniably unique storyteller, Herzog also has an infectiously self-centered manner of speaking about his own work. With his four-decade career of unforgettably strange and philosophical narratives, he has earned the arrogance, but it’s still a wonder to behold: He claimed to have written all the memorably strange moments in "Port of Call," including a scene in which Cage’s character has a vision of iguanas on a coffee table and another in which a dead man’s soul rises up to break dance (oddly, the dancer is played by the credited screenwriter, William Finkelstein).

He also boasted about managing to collaborate with infamously difficult producer Avi Lerner. "He never read the screenplay," Herzog said. "Everybody warned me: ‘Oh my god, you can’t work with a man like him. I was the only one to ever invite him to the set." Herzog said he finished the production two days ahead of schedule and $2.6 million under budget. "Now, he wants to marry me," Herzog said of Lerner.

The director stays busy. He recently began offering weekend seminars in filmmaking, and just finished an additional feature also premiering at TIFF this week: "My Son, My Son, What Have Ye Done," another police movie, stars Michael Shannon and was produced by David Lynch.

I asked Herzog if he takes on all these projects as a means of making a living, or exclusively to satisfy his creative needs. "I have always managed to make a living somehow," he said. "My standard of living is way under what you would probably expect from a director, but it always happens that once I earn money from a film, I immediately invest in the next film."

But was it daunting for Herzog, who often makes daring adventure documentaries, to make a movie with a big Hollywood star? "No," he said. "A force like Nicolas Cage and a force like me should be left in peace."

An excerpt of Herzog’s statement from the "Bad Lieutenant" press notes:
It does not bespeak great wisdom to call the film The Bad Lieutenant, and I only agreed to make the film after William (Billy) Finkelstein, the screenwriter, who had seen a film of the same name from the early nineties, had given me a solemn oath that this was not a remake at all. But the film industry has its own rationale, which in this case was the speculation of some sort of franchise. I have no problem with this. Nevertheless, the pedantic branch of academia, the so called "film-studies," in its attempt to do damage to cinema, will be ecstatic to find a small reference to that earlier film here and there, though it will fail to do the same damage that academia — in the name of literary theory — has done to poetry, which it has pushed to the brink of extinction. Cinema, so far, is more robust. I call upon the theoreticians of cinema to go after this one. Go for it, losers.