If Hillary Clinton is going to be our next president, we may know it by 6 p.m. Pacific time. A win for Donald Trump would take longer, and likely end with a tense showdown in the West.

Yes, it’s all ending: the emails, the Tic-Tacs, the conspiracies, The Wall. We may be able to put this thing to bed by 6 p.m. and — and —

Who are we kidding? Nothing has gone according to plan in the 2016 election. Sure, the night could end early — but that’s barring contested vote counts, unpredictable delays, or the outbreak of a Civil War.

Will Be President” target=””]

If we go by the latest polls, though — as tracked by Nate Silver’s fivethirtyeight.com — here’s how the night will go down.

To be fair, Indiana and Kentucky aren’t alone in their weird scheduling: Take one look at Ballotpedia‘s helpful list of when polling places close in each state, and you’ll see that our country’s time zones are a mess.

It doesn’t really matter when the polls close, though, because you can pretty much put Kentucky and Indiana in the Trump column now. Indiana Gov. Mike Pence is Donald Trump’s running mate, and the race there has never been close.

Here’s America if only Indiana and Kentucky voted. Trump is red; Clinton is blue. (All maps here were made with RealClearPolitics prediction tool.) 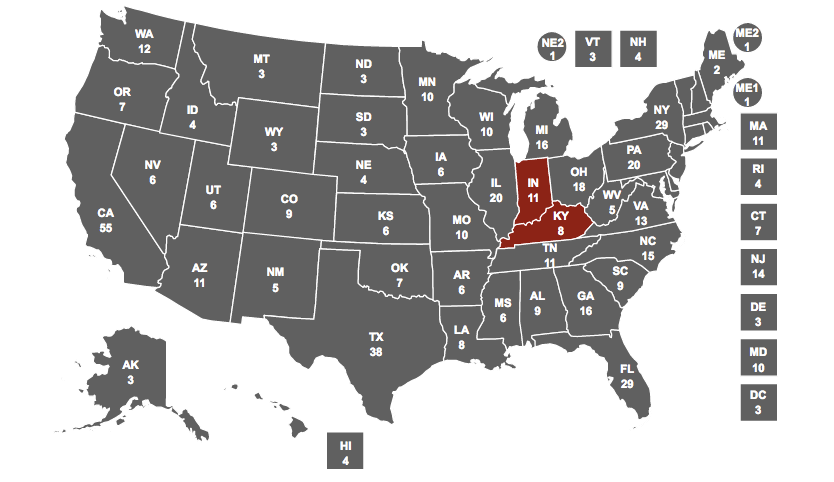 At this point, if nothing else, Trump can take pride in winning two of our prettiest states.

4 p.m. PT/7 p.m. ET: Vermont and Virginia’s polls close. If Clinton loses Virginia, where she has led in polls and which Obama won in 2008 and 2012, she should be nervous. If Trump wins Vermont, the home state of Bernie Sanders, the system is absolutely rigged. Ain’t gonna happen.

Some polls in Florida and Georgia also close at 7 p.m., but others close at 8 p.m., and both could be close. So there’s no telling when the vote counts from either might roll in.

A Florida win for Clinton would be huge, since Trump has led there. But she seems to have the advantage now,  and its whopping 29 electoral votes are crucial to his chances. The winner needs 270 electoral votes.

If Georgia goes to Clinton, she’ll probably win the presidency with relative ease, because Georgia has traditionally been an easy win for Republicans. Clinton led there for part of August, but Trump has since regained the lead.

New Hampshire polls generally close at 7 p.m. ET. The “Live Free or Die” state doesn’t play by anyone’s rules. So while it favored Clinton for a while, Trump trended up last week. Now it looks like Clinton’s state to lose, again. That’s a lot of drama for four electoral votes, but cracking the Northeast’s Wall of Liberalism would be a big morale boost to Trump supporters.

Here’s how we think America will look a little after 4 p.m. PT, assuming everyone counts their ballots really fast. This brings us to 49 Electoral College votes for Clinton and 35 for Trump: 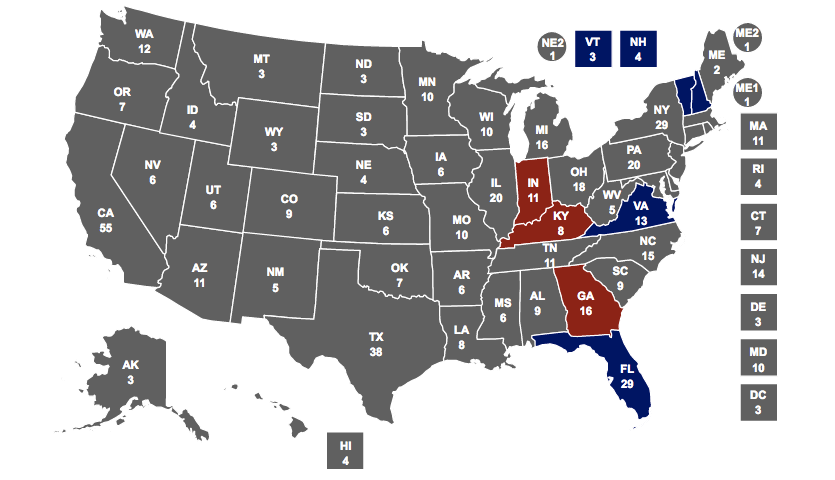 4:30 p.m./7:30 p.m. ET: High drama in the middle of the hour, when polls close in Ohio, North Carolina, and West Virginia. Clinton hopes to steal Ohio from Trump. West Virginia is a lock for him. Her hopes to capture North Carolina seemed to dim last week, because of fewer early votes by African-Americans, who turned out big for Obama in the last two elections. (He won in 2008, but lost North Carolina to Mitt Romney in 2012. Fewer early voting stations seemed to be a factor.) But now Clinton looks to be in good shape. Which brings us to: 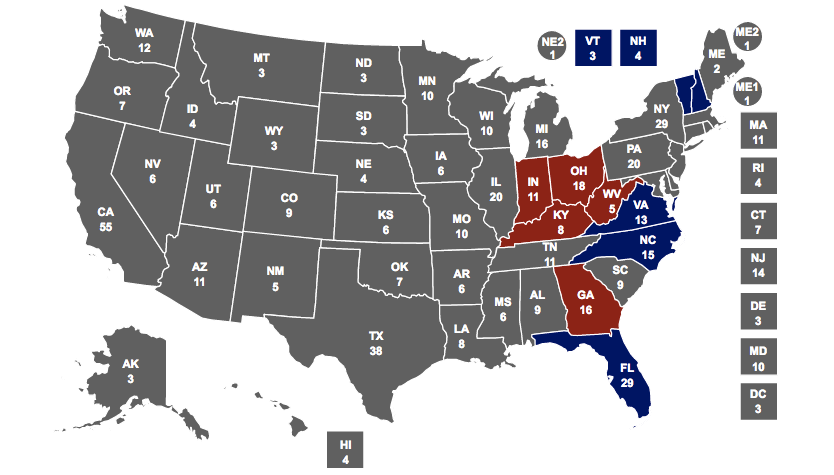 That would be 64 Clinton, 58 Trump. (If he doesn’t win Ohio, Pennsylvania or Florida, he’ll be in very bad shape at this point.)

This is when polls close in Connecticut, Delaware, Maine, Maryland, Massachusetts, New Jersey, South Carolina and Washington, D.C. Every one of them should break reliably for Clinton, with the exception of South Carolina. A couple of electoral votes in Maine are also up for grabs. Let’s give one to Trump, for the sake of argument. If Clinton doesn’t have a very strong showing as of 5 p.m. PT, something has gone very wrong for her.

Which would bring us to 113 Clinton, 68 Trump — which means Trump is basically done, for reasons we’ll soon explain. 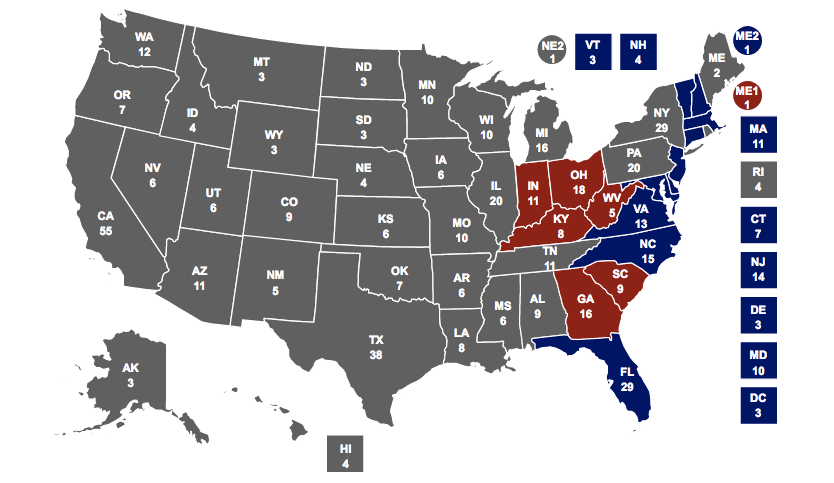 8 p.m. ET is 7 p.m. CT, when polls close in the Trump strongholds of Alabama, Mississippi and Oklahoma. Missouri also looks good for Trump. Illinois and Wisconsin close at the same time, and both look good for Clinton, who grew up in the Chicago suburbs.

Here’s how the country will likely look after 5 p.m. PT/8 p.m. ET, assuming things break like polls are predicting. It brings us to 143 votes for Clinton, and 100 for Trump: 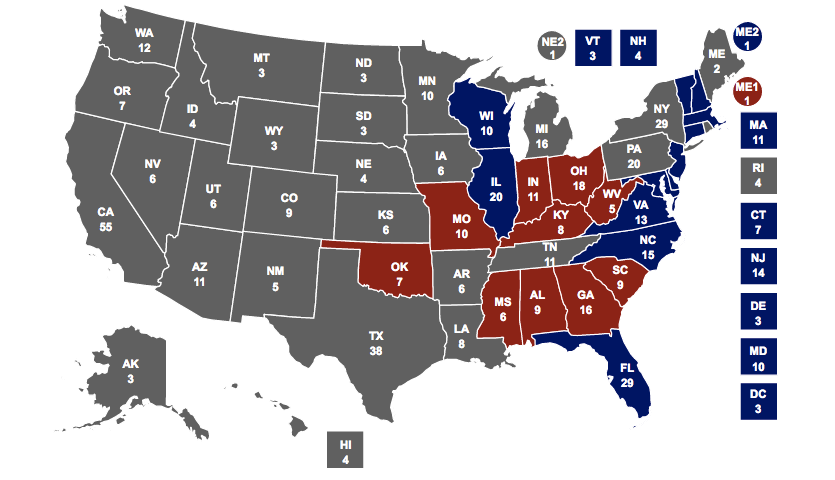 This seems like as good a place as any to mention that several additional states are divided up across two time zones, with polls closing at various times. They are Kansas, Michigan, Nevada, North Dakota, South Dakota, Tennessee, and Texas. All of these states, except Michigan and possibly Nevada, are going for Trump. Michigan is probably safe for Clinton. 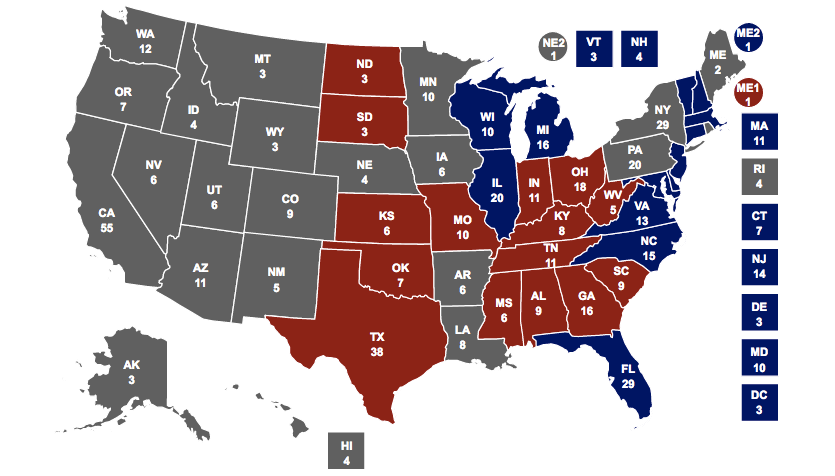 Which looks bad for Clinton, right? Nope. Because pretty much everyone agrees that the following things will happen.

-California (55 whopping votes), Washington and Oregon will all go Clinton. (Some parts of Oregon, which is mostly on Pacific Time, are on Mountain Time. But it doesn’t matter much because Oregon is vote-by-mail, and is going for Clinton pretty much no matter what.) Also Pennsylvania, New York, and Rhode Island. What time do polls in those states close? Who cares? They’re in Clinton’s bank.

Which brings us to 286 Clinton, 171 Trump. And that means Clinton wins. Before West Coasters even start dinner. The only way for this not to happen is for Trump to win one of the big earlier states: Ohio, Pennsylvania and/or Florida — and lots of smaller battlegrounds. Then we would turn to the remaining battlegrounds of Colorado, Arizona, Nevada, and New Mexico — and an election for the ages.