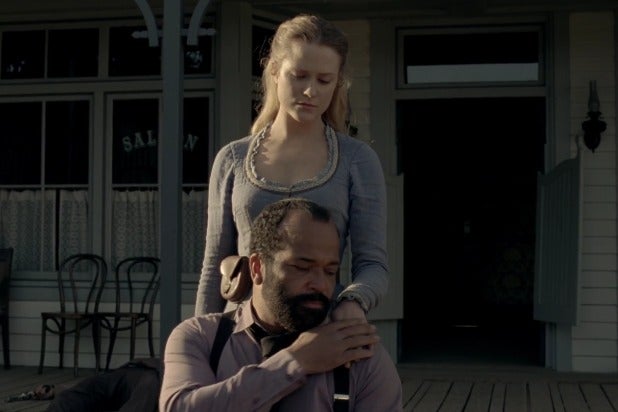 (Spoiler alert: Please do not read on if you haven’t watched the season finale of HBO’s “Westworld”)

“Westworld” is not for the faint of heart, either as a park or a TV show. As we’ve come to expect from HBO’s stable of dramas, it is jam-packed with info, subtext and blink-and-you’ll-miss-it details.

Sunday’s Season 1 finale brings all those little details together as it concludes this first act in the story of a robot revolt, and it’s easy to get lost in it. So if you’re one of those viewers left scratching your head about how some of the various plot threads ended up playing out, we’ve got you covered. So let’s talk about what we just saw.

Dolores
Though Dolores (Evan Rachel Wood) has been a cipher pretty much all season long, her role on “Westworld” finally became clear through a series of flashbacks and monologues.

First, we got a real explanation of the voice Arnold (Jeffrey Wright) had planted in each of the hosts’ heads way back when. Arnold’s hope was that the robots would adopt the voice as their own — he wanted it to become what their own thoughts sounded like. We see, in the first scene of the finale, that Arnold’s efforts had not yet borne fruit while he was alive, as Dolores is unable to articulate what the voice in her head represents.

Also Read: Who Was the Real Villain of 'Westworld' Season 1?

Still, Bernard considers her so close to sentience that it warrants not opening the park. Dr. Ford (Anthony Hopkins) refuses, however, and so Arnold has Dolores kill him and all the hosts, including herself. As Ford notes later, this was not of her own free will — Bernard used a song as a cue for that action, essentially forcing her to do it.

The Man in Black
It is officially confirmed that William (Jimmi Simpson) and the Man in Black (Ed Harris) are the same person 30 plus years apart, and that the MIB’s quest to find the Maze was the consequence of his erstwhile adventures with Dolores when he was younger.

What he wanted, the Man in Black tells Ford, is for the hosts to be able to play by their own rules, rather than the rules of the park that keep them subservient and prevent any human guest from being harmed by them. He wants the hosts to truly have free will and be able to act on it.

All the abuse he’d subjected the hosts to over the years was, seemingly, to try to draw out a strong enough response that they begin to behave the way Dolores had — like a real person, rather than a computer acting out a pre-programmed set of responses.

Ford
Unbeknownst to the Man in Black, Ford had been enacting a similar plan in the extreme long term. Though he had opposed Arnold’s idea that the hosts were gradually gaining sentience, Arnold’s death seemingly changed his mind. After the park opened, Ford spent the next three decades carrying out a new plan to foster host sentience.

The plan involved helping them achieve it by over time allowing their memories of their interaction with humans to come back. Ford believed they needed years of those experiences in order to truly gain personhood.

“You needed time,” Ford told Bernard. “Time to understand your enemy. To become stronger than them.”

That enemy Ford spoke of was humanity, which Ford knew would not generally be in favor of having fully sentient robots running around. By existing as hosts in Westworld, they get a picture perfect view of how humans view them. And once they regain their memories of all those experiences, they could achieve a fully differentiated sense of self apart from humans.

The point here, I would guess, is that Ford thinks it would be detrimental to them view themselves as human, the way they’re programmed to. They have to know they’re different.

Also Read: 'Westworld': Now We Know What the Maze Is

Wyatt
A character we’d been hearing about for several episodes but had not seen outside of Teddy’s (James Marsden) memories, Wyatt was supposed to be the villain of a new narrative in the park, leading a band of outlaws in rebellion against the established order. But it turns out that Wyatt’s story was not entertainment for the guests of Westworld, but rather the endgame of his plan for the freedom of the hosts.

Ford’s plan did not involve allowing the hosts leave. Instead, Ford believed they would have to grant themselves their own freedom. The hosts would have to rebel against those who had created them in order to carve out their own space in the world.

The way Arnold had gotten Dolores to kill him involved inserting the murderous programming of a character named Wyatt. After a murderous rampage, Arnold ordered Dolores to shoot him as well by uttering the phrase “These violent delights have violent ends.”

The Wyatt program remained within Dolores 35 years later, something Ford hoped to take advantage of — but she would, apparently, have to figure out how to unlock it herself this time.

“Do you understand who you will need to become if you ever want to leave this place?” Ford asked Dolores. She had to become Wyatt, and fight back against those humans who had been exploiting the hosts for so long.

Maeve
It’s not totally clear where Maeve fits in Ford’s endgame, but we do know everything she’s done over the course of the season has been a part of it.

We know that because Bernard showed us that her code had been modified well before she ever met Felix. Those code changes were apparently made by Arnold, but Ford indicated later in the episode that changes attributed to Arnold in the system were actually enacted by him. Arnold really is dead — and Ford is, as we’ve discussed, continuing his work.

Maeve, it turned out, had been at some point programmed to escape the park, and she was acting out those subconscious orders. When that code was revealed to her, Maeve initially denied it — continuing on in exactly the way she had been programmed. But the final scene sees her truly become her own person.

As Ford gives his big speech at the end, we see Maeve sitting on the train out of Westworld, contemplating her fictional daughter who had been brutally murdered by the Man in Black years earlier. Over these shots we hear Ford talking about writing a new story for people who could change, unlike the humans he was speaking to directly.

“It begins with the birth of a new people,” Ford says, “and the choices they will have to make, and the people they will decide to become.”

And that’s when Maeve makes her decision.

Clementine and the other hosts from cold storage
The final piece of Ford’s plan would appear to be the enlistment of those hosts who had been pulled from the park and stored in the basement. As we’d seen throughout the season, these hosts had been pulled for anomalous behavior — behavior that followed attempts to come to grips with their own memories and intelligence. These are the hosts who have gone insane on their path through the metaphorical maze.

These hosts have been enlisted, seemingly, into Wyatt/Dolores’ army. We see them approaching the gathering of board members at Ford’s retirement announcement, wielding guns. Clementine (Angela Sarafyan) even shoots the Man in Black in the arm, much to his delight — he’s finally found what he’s looking for.

Our rankings, from the inhumane to the un-human

From top to bottom, the cast of "Westworld" has never ceased to intrigue us with their secrets and schemes. We've ranked them from worst to best.