“Westworld” viewers know well enough by now that “dead” doesn’t always mean dead in the HBO sci-fi series, but Episode 7 of Season 4 sure seemed to seal the fate of one of the series’ most beloved characters.

Since returning from the Sublime, Bernard has maintained that after running simulations, there is only one way to save the world – and in that scenario, he doesn’t make it out alive. After teaming up with a revived Maeve (Thandiwe Newton) to take on Charlotte Hale (Tessa Thompson) and her tower that has human citizens of New York City under control, Bernard was confronted by the William host (Ed Harris) and subsequently shot to death.

When asked by TheWrap if Bernard is dead in a recent interview about the episode, Wright replied simply, “It seems so.”

The actor wouldn’t let on more than that, and in a season that has seen the return of James Marsden’s Teddy, Wright’s answer seems to leave the door open a smidge for Bernard’s survival – either in the real world or in the Sublime. And with one episode left this season, it’s hard to know for certain where this is all going. 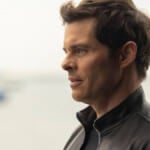 Wright did allow, however, that he was intrigued by Bernard’s storyline for Season 4 as a path towards emancipation for the character.

“I’ve been looking forward to Bernard’s emancipation in a sense, and it’s been a journey for him from the beginning of the series, really, toward that. And so when [co-showrunner] Lisa Joy described to me what Bernard had discovered in between seasons, I was pleased that he could kind of further embrace his own agency this season,” Wright said. “But at the same time, I kind of understood that he was on a pretty precarious path. And so off we went.”

The actor was drawn to the idea of Bernard wrestling internally with the choice of whether to live forever in the Sublime or to risk his life to save humanity.

“Bernard is kind of actively wrestling internally as opposed to being actively wrestled,” Wright explained. “For the first couple of seasons, Bernard was kind of attempting to emerge from the chrysalis, but he was still, in many ways, under the thumb of Ford and the park and Delos and all manner of things. So it was really gratifying to finally have him free himself after so much struggle.”

That internal wrestling has much to do with Bernard’s compassion for humanity, and Wright talked about how the spirit of Arnold – Bernard’s human predecessor – lingers all these years later.

“I’m often asked about Bernard’s allegiance, this persistent, stubborn allegiance to humankind, that despite everything he’s been through, he still for whatever reason has some type of faith even beyond perhaps what the actor who’s playing him has in the human species,” Wright admitted. “This journey this season is about the loyalty to himself and to the hosts, but also his sense of compassion and empathy for humans. And I think that the latter comes from these experiences as Arnold, as this proxy, as this kind of recreation of this man.” 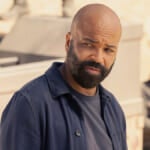 Wright singled out a moment from Season 3 in which Arnold’s wife shows Bernard grace as an experience that emboldens Bernard’s faith in humanity.

“Particularly that moment last season in which he is shown grace by Arnold’s wife in a way that was, I think, for him unexpected but so powerful. It’s that moment particularly, and perhaps some other moments, that I think have really imbued him with this persistent hope that there’s something worth saving, and that despite the catastrophic tendencies of humans, there’s something beautiful at the core. It’s partly because of his proximity to Arnold that he’s on the journey he’s on this season.”

That journey brings Bernard back together with Maeve, and Wright said he found himself getting emotional during one particular scene involving Newton’s character.

“What I found so moving about the relationship between the two of them was really the moment that Bernard frees her from the sands,” he said. “There was something about doing that, when we filmed it, that I just found so emotional, and it had to do I think with my admiration for Thandiwe, but also with Bernard’s sense of connection to these fellow beings. It was just imbued with so much stuff, that moment for me, and it spoke not only to the characters and their lives together, but I think also to our lives over these past years together, working on the show. I care for her deeply.”

If this really is the last we’ve seen of Wright’s Bernard, the actor says his time on “Westworld” has been both gratifying and surprising.

“I remember years ago thinking that it would be kind of stifling to work on a TV series. I thought it would be repetitive and, at the end of the day, a bit boring to kind of come back to the same character over and over again,” the actor recalled. “What I found on our show is really the opposite. One, it has to do with the innovation and the creativity within our writers – led, of course, by [Jonathan] Nolan and Lisa Joy. [What] the expansiveness of their imaginations and the expansiveness that this show allows is just titillating for us as actors.”

Wright remembers after reading the pilot script he felt hopeful and excited about the storytelling potential that the technology at the center allowed.

“It was evident at the beginning when I read the pilot for our show that it was so well constructed and well written. But what was really evident and super important at the beginning was that it was clear from that first script that because it was grounded in this technology, the possibilities for storylines were almost limitless. That was extremely exciting for me, and it’s proven itself out. The world and the worlds are our oysters because just the construct allows so much exploration.”

But Wright says, contrary to his initial hesitations, that he found the experience of playing the same character over multiple seasons rewarding.

“And then as well what I’ve found is, unlike prior reservations – and again it has to do with the quality of our writers – is that I’ve really enjoyed revisiting this character over the years. One because he’s evolved so much and that’s been gratifying and interesting, but also because as the years go on, you really begin to sink down into the essence of the character in a way and understand the impulses and thoughts and emotions within the character so well that it almost becomes like it just becomes a second skin,” Wright said, adding with a laugh: “A synthetic skin in this case, but a second skin nonetheless.” 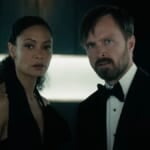