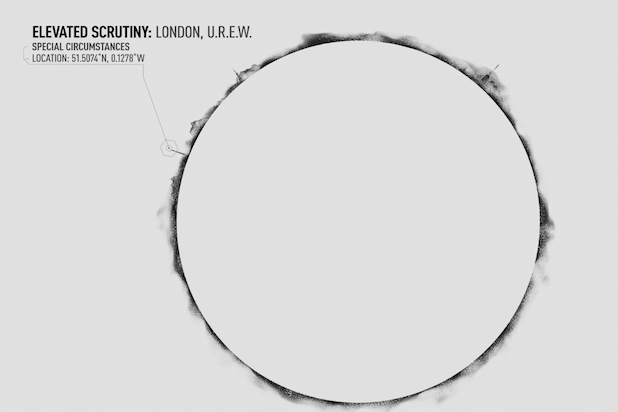 After two seasons that took place almost entirely on the island where those wacky Delos Destinations parks were located, “Westworld” is finally moving us into the real world. We already knew the show took place in the future, of course, but now we’re getting an idea of what that future looks like.

For the most part, the future is not all that outlandish or weird — that goofy criminal enterprise app notwithstanding. It’s really just an extrapolation of the world as we currently know it. But technology isn’t the only thing that changes with time. Borders do, as well.

A few times in the “Westworld” premiere, we get cryptic white screens with a brief comment about something happening at a specific location in the world. I’m assuming, for now, these are the “thoughts” of that giant AI supercomputer at Incite headquarters. But one of these in particular caught my eye. It read:

Also Read: 'Westworld': The Biggest Questions We Have After the Season 3 Premiere

What caught my eye was the acronym U.R.E.W., which is in the spot that in all the other examples where it says what country that city is in. Like “Los Angeles, USA.” So while I can’t even begin to guess what U.R.E.W. stands for, it’s safe to say that it’s telling us that is the country where London is located in the “Westworld” timeline.

Which, in turn, means that the United Kingdom no longer exists. The season premiere doesn’t give us any further context for this whole thing, but it implies a lot about the world’s political situation in 2058.

UPDATE: A person on reddit who is smarter than I am suggested that U.R.E.W. might stand for United Realms of England and Wales, which is I think a pretty likely idea. The concept there being the Scotland and Northern Ireland did a Brexit of their own and so what was left of the UK had to rebrand. And maybe the monarchy was abolished as well. U.R.E.W. is not the most catchy acronym, however.

We already suspected that things might be different in the “Westworld” version of reality. In Season 2, in the episode titled “Reunion,” we get a flashback with Logan (Ben Barnes) that takes place decades before the main season narrative. He’s at a party, he’s very high, and he makes an odd quip to Dolores (Evan Rachel Wood):

Also Read: 'Westworld': What in the Hell is Going On With Bernard?

“Do you wanna know what they’re really celebrating up there? That, darlin’, is the sound of fools fiddling while the whole f—ing species starts to burn. And the funniest f—ing part? They lit the match.”

The easiest way to interpret that comment is that he was merely foreseeing the future that would come about when the Hosts began their uprising many years later, or how those rich folks are gonna go all in on living forever in robot bodies. On the other hand, given how “Westworld” certainly has a lot of thoughts about class politics, you could just as easily view Logan’s quote about humanity ending as referring to something terrible that was going on in the real world — something that the sort of rich people who were at that party may have been responsible for.

I may, of course, be way off base citing that specific quote, though it always bugged me. But it’s inarguable that London being part of a nation called U.R.E.W. instead of the United Kingdom is a huge shift in the geopolitical landscape of the world. And it’s something that, realistically, would only happen under pretty catastrophic circumstances.

Also Read: 'Westworld' Creators Give Us Insight Into Incite and Dolores' Plans for (Real) World Domination

Unfortunately, we have no idea right now what those circumstances might be, so we’re left to try to make wild guesses about what U.R.E.W. stands for and how it came to be. But I’m sure we’ll learn more as “Westworld” Season 3 barrels on.