Please remain seated, strapped in and keep all arms and legs inside the thrill-ride that is sure to be “Westworld” Season 4. Premiering June 26, the HBO sci-fi thriller will, according to its new trailer, venture into a new theme park reminiscent of the gangster era.

Details are scant surrounding the new season, as the show’s EPs and cast remain tight-lipped about what viewers can expect. The trailer doesn’t give much away, except for spooky and dystopian vibes. 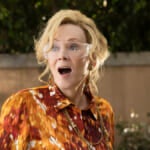 In the clip, Thompson’s Charlotte Hale has a confrontation with The Man in Black (Harris), teasing new dynamics as she says, “Your kind made a sport out of hunting us. You controlled our every move, and now, I’m going to do the same to you.” He responds with the show’s tagline, “Maybe it’s time you questioned the nature of your own reality.” In the meantime, Newton and Paul’s characters journey back to the 1920s with a park that looks fit to be a set for a classic neo-noir picture.

“Westworld” was created by Jonathan Nolan and Lisa Joy, who are executive producers with Alison Schapker, Denise Thé, J.J. Abrams, Athena Wickham, Richard J. Lewis and Ben Stephenson. Kilter Films and Robot Productions are behind the show in association with Warner Bros. Television.

Watch the trailer here or at the top of this post.