(Spoilers ahead for the April 19 episode of “Westworld” on HBO)

So, uh, a lot happened on “Westworld” on Sunday, and the sort of low-key spy games that Dolores (Evan Rachel Wood) and her crew have been playing have now spilled over into a full-fledged war with Serac (Vincent Cassel) now that Serac is in control of Delos. And on top of that, Maeve (Thandie Newton) is about to go all-out after Charlotte-Dolores destroyed Hector’s (Rodrigo Santoro) pearl.

Maeve didn’t spend a long time mourning, though. She was inside Serac’s Matrix-like virtual construct — her old one destroyed a couple episodes back, as you may recall — trying to interrogate Connells-Dolores when that tragedy struck. Charlotte was presumably going to destroy Maeve as well but she was interrupted by a gunfight and had to flee.

But now Maeve is back in the real world with a new body of her own. And she’s bringing some friends with her. In the last shot of Maeve’s final scene in this episode, we see her standing over another cradle as another body is being assembled. We don’t know who’s in that body, but we do know that they were constructing two more as well, thanks to this glimpse at Charlotte’s computer screen midway through the episode: 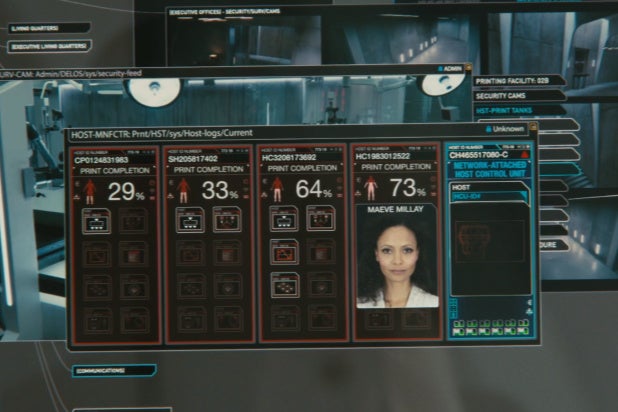 So there are five hosts here on that screen, and four bodies being printed out, and none of them appeared to have been damaged by the brief gunfight in the cradle room. The “network-attached host control unit” is, of course, Connells-Dolores, who is not getting a new body, as Charlotte took that pearl with her when she left. And obviously we’ve got Maeve herself. And one of the bodies was going to be Hector, so we will probably at least have a Hector body in the next couple episodes even if we don’t have Hector himself.

Still, that’s three host bodies being constructed and we don’t have any idea who will fill them. But we can make some guesses.

The most obvious option is that Maeve took a page from Dolores’ playbook and copied her mind to put in the two non-Hector bodies. And, you know, now that Hector is gone she could theoretically toss another Maeve in him. Though we don’t know what kind of process is required to make those copies.

The problem with that idea is one of logistics, however. Would Maeve’s special powers carry over in a copy? It’s impossible to guess about that since we technically still don’t even know how she gained the ability to control other hosts. We do, at least, know that it transfers between bodies, but this whole copying thing is still news to us and we don’t have the context to figure that out. But maybe that question doesn’t matter anyway. The problem was that she needed bodies, and she has them now regardless of whether they can do that mind control thing.

Another pretty clear possibility for one of those remaining three bodies is that Maeve is bringing the simulated Lee Sizemore (Simon Quarterman) into the real world. I’ve been expecting this to happen since we first met him four weeks ago, but honestly I’m not sure what his utility would be at this point, though surely if Maeve were going to do this she would presumably have some reason in mind. Regardless, Quarterman is still listed in the opening credits, meaning he’s classified as regular cast instead of guest star the way Santoro was this season. Meaning we’re almost certainly going to see more of him in the final two episodes, since he hasn’t been around much before now.

For those (like me) who are sad about Hector’s apparent permadeath, there’s also the possibility that Delos has a backup of his mind that Maeve could use now that Serac has all that data. Serac ordered all that host data destroyed earlier in the episode, though, and it’s not clear whether that order was carried out by the end of the episode — we just know they destroyed all those host bodies in cold storage. You’ll remember that Charlotte-Dolores did manage to make a copy of that data and transmit it, though Serac, who was watching everything she did in Delos HQ, seemed to indicate she didn’t actually transmit anything.

It’s always possible as well that one or more of Maeve’s other pals is still around as well — I certainly wouldn’t scoff at the return of Armistice (Ingrid Bolsø Berdal) or Hanaryo (Tao Okamoto), two other members of Maeve’s old team who didn’t make it into the Valley Beyond.

Beyond that, it’s anyone’s guess. There’s only two more episodes left in season 3, though, so I doubt we’ll have to wait too long to find out.

Plus: ”Homeland,“ ”Outlander“ and ”American Crime Story“ will be back — just not right away