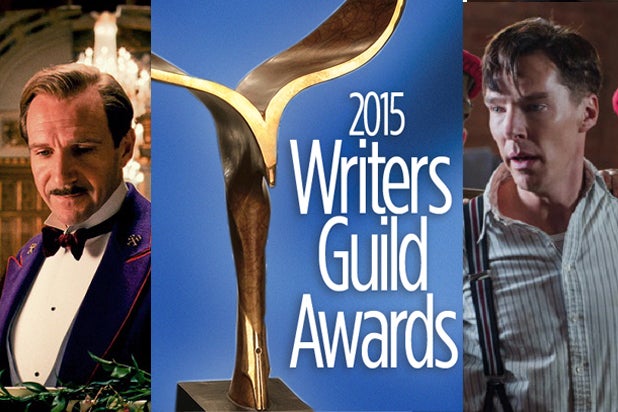 “The Grand Budapest Hotel” and “The Imitation Game” were named the best original and adapted screenplays of 2014 on Saturday night from the Writers Guild of America, which handed out awards at simultaneous ceremonies in Los Angeles and New York.

Although it had won other three major guild awards — the DGA and PGA awards and SAG’s ensemble prize — “Birdman” was not eligible to make it a sweep. Because of WGA rules restricting its awards to films that are made under the guild’s Minimum Basic Agreement or the agreements of several affiliated international guilds, “Birdman” was ineligible for a Writers Guild Award, as was the Oscar-nominated adapted screenplay for “The Theory of Everything.”

“Last Week Tonight With John Oliver” won the award for comedy/variety series, while the Golden Globe Awards beat the Tonys and the Spirit Awards as best comedy/variety special.

In other awards, “General Hospital” won for the best daytime drama and an episode of “The Simpsons” won for animation. TV documentary awards went to two reports from “Frontline” and a Diane Sawyer special on Nelson Mandela.

The feature-film documentary award went to “The Internet’s Own Boy: The Story of Aaron Swartz.”

TheWrap will update the winners as the show goes on with *WINNER.