Barry Levinson, the Oscar-winning writer-director of  "Diner" and "Avalon" and the director of "Rain Man," "The Natural" and "Good Morning, Vietnam," has been named recipient of the 2010 Laurel Award for Screen by the Writers Guild of America, West.

Levinson will receive the award on Saturday, February 20 at the Hyatt Regency Century Plaza Hotel in Los Angeles.

The press release announcing the award: 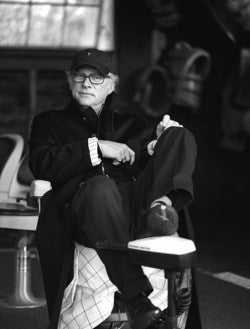 “From ‘Diner’ to ‘Avalon,’ ‘Rain Man’ to ‘Tin Men,’ filmmaker Barry Levinson has long demonstrated a wonderful ability to create memorable movies that resonate with audiences by capturing a particular time and place,” said WGAW President John Wells . “A rare triple threat in the industry – writer, director, and producer – Barry has been the creative force behind many of this era’s defining films.”

Academy Award-winning screenwriter, director, and producer Levinson has crafted a reputation as a filmmaker able to translate literate and intelligent visions onto the big screen. As a screenwriter, Levinson has received three Oscar nominations for "…And Justice for All" (with co-writer Valerie Curtain, 1979), "Diner" (1982) and "Avalon" (1990). A six-time WGA nominee, Levinson has earned three Writers Guild Awards over the years: twice in 1991 for his script for "Avalon" (Original Screenplay) and a shared WGA statuette for his work on "Time-Warner Presents: The Earth Day Special," as well as for his work on The Carol Burnett Show earlier in his writing career.

In 1988, he was awarded the 1988 Best Director Oscar for the multiple Academy Award-winning film "Rain Man," starring Tom Cruise and Dustin Hoffman. In 1991, "Bugsy," directed and produced by Levinson, was nominated for ten Academy Awards, including Best Picture and Best Director. His other iconic films, from "The Natural" (1982) to "Good Morning Vietnam" (1987) to "Sleepers" (1996), written for the screen and directed by Levinson, based upon the book by Lorenzo Carcaterra, have been proved major box office hits.

Born and raised in Baltimore, Maryland, Levinson has used his hometown as the setting for four widely praised features: "Diner", the semi-autobiographical comedy/drama that marked his directorial debut; "Tin Men," involving warring aluminum siding salesmen; "Avalon," in which his native city takes center stage through the recollections of an immigrant family; and "Liberty Heights," a humorous and touching drama that captures the spirit of change in Baltimore circa 1954, addressing issues of race, class and religion.

After attending American University in Washington , D.C. , Levinson moved to Los Angeles , where he began acting, as well as writing and performing comedy routines. He went on to write for several TV variety shows, including The Marty Feldman Comedy Machine, The Tim Conway Show, and The Carol Burnett Show. A key meeting with Mel Brooks led him to collaborate with the veteran comedian on features "Silent Movie" and "High Anxiety," both of which he co-wrote along with Brooks, Ron Clark, and Rudy DeLuca.

With his film career well under way, Levinson returned to Baltimore to film the TV series "Homicide: Life on the Street." The hit series received three Peabody Awards, two Writers Guild Awards (Episodic Drama, 1994/1995), and an Excellence in Quality Television Founders Award for the 1994 and 1995 seasons. His work on this critically acclaimed NBC drama also earned him an Emmy for Best Individual Director of a Drama Series. Among other accolades, Levinson and his partner Tom Fontana also received the 1999 Humanitas Award for the "Homicide: Life on the Street" episode titled “Shades of Gray.”

The close of 1997 saw Levinson at his most prolific as a director, releasing two films nearly back to back, "Wag the Dog" and "Sphere." Political satire "Wag the Dog," with a screenplay by Hilary Henkin and David Mamet and based on the book American Hero by Larry Beinhart, was nominated for two Academy Awards. Sci-fi thriller "Sphere" – screenplay by Stephen Hauser and Paul Attanasio, adaptation by Kurt Wimmer, based on the novel by Michael Crichton – marked Levinson’s fourth collaboration with Dustin Hoffman.

During that time, Levinson partnered with Paula Weinstein, forming Baltimore/Spring Creek Pictures. Together they produced box-office hit "Analyze This" (1999). Levinson was named one of Variety’s “Billion Dollar Directors,” as well as ShoWest’s “Director of the Year” in 1998. In February 1999, Levinson was honored with a Creative Achievement Award by the 13th Annual American Comedy Awards. Later that year, American University conferred upon Levinson the Doctor of Fine Arts, honoris causa, for his distinguished work in the field of communications and his defining impact on the motion picture and television industry.

Under their production banner of the Levinson/Fontana Company, Levinson and Tom Fontana executive produced the critically acclaimed HBO television series "Oz," which aired for six seasons from 1998 through 2003. With the release of the dark comedy "Man of the Year" in 2006, Levinson returned to the theme of politics, re-teaming with his "Good Morning, Vietnam" star Robin Williams. Written and directed by Levinson, that film featured Williams as a late-night political talk show host who runs for president and ultimately winning due to a computer voting system glitch.

In 2008, Levinson directed the adaptation of Art Linson’s Hollywood tell-all book, "What Just Happened?", re-teaming with Robert De Niro for their third movie together. Most recently, Levinson has made two documentaries, "Poliwood," exploring the intersection of politics, Hollywood , and media during the 2008 Presidential election, and "The Band That Wouldn’t Die" for ESPN, a Frank Capra-esque tale of the Baltimore Colts Marching Band that Sports Illustrated named best sports movie of 2009. His latest project is an upcoming film about Dr. Jack Kevorkian, "You Don’t Know Jack," starring Al Pacino.

Awarded to a Writers Guild member who has advanced the literature of motion pictures and made outstanding contributions to the profession of the screenwriter, the WGAW’s Laurel Award for Screen has been received in past years by such notable writers as Horton Foote, Mel Brooks, David Mamet, Lawrence Kasdan, Robert Benton, and the Guild’s most recent recipient, Budd Schulberg.