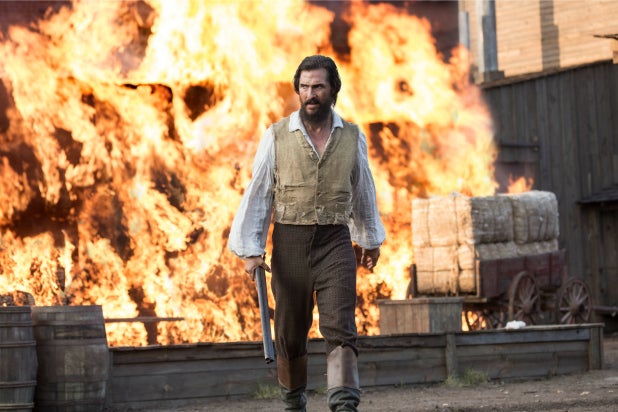 Unflattering reviews have been streaming in for STX Entertainment’s Civil War drama “Free State of Jones” as experts predict the film will land in theaters this weekend with a thud.

Made for $50 million, the Matthew McConaughey vehicle has long been considered a prestige project for the young studio, now in its second year of releasing movies.

But with a full future film slate, including titles like the upcoming comedy “Bad Moms,” the company’s film arm isn’t pinning all of its hopes to director Gary Ross’ historical drama.

Also Read: 'Free State of Jones' Feels Like 'Cramming for a History Exam at 2 AM' and 8 Other Merciless Reviews

“This company has been built to last,” Adam Fogelson, chairman of STX’s film division, told TheWrap. “Over the course of slates and slates and slates of films you have the opportunity to run a truly successful business.”

He should know. Fogelson greenlit dozens of mid-budget titles during his days at Universal Pictures — including the hits “Ted,” “Bridesmaids,” and “Identity Thief.”

Written and directed by Gary Ross (“Seabiscuit,” “The Hunger Games”), “Free State of Jones” revolves around a little-known slice of history, when a rebellion formed against the Confederacy inside the borders of the South.

And while STX made an effort to plant its flag in the ground with the title to show Hollywood what it can do, the film looks like it will barely crack $10 million as it opens on 2,815 screens.

“Like an old musket, this has one shot in it,” said Jeff Bock, senior analyst at Exhibitor Relations, noting that dramas especially need approval among critics in order to compete. “And that shot isn’t coming near the box office bullseye… ‘Free State of Jones’ is headed for bona fide box office obscurity.”

The budget doesn’t represent the same risk a bigger studio would have typically taken on. “Our equity exposure is minimal and we have no international P&A invested at all, because we have an international partner,” Fogelson told TheWrap. With IM Global Films investing and an unusually large number of executive producers and other financial partners partners, STX’s financial risk comes in lower than $10 million.

STX has professed a strategy of mid-budget, talent-driven films and has seen relative successes with the 2015 thriller “The Gift” — which earned $59 million against a production budget of $5 million — and the horror film “The Boy,” which made $64.2 million earlier this year on a $10 million budget.

The young studio has also had to live down a few bombs, including the 2015 crime drama “The Secrets in Their Eyes,” starring Julia Roberts and Nicole Kidman. There was also the studio’s action thriller “Hardcore Henry.” Both films making rather negligible returns.

The studio’s biggest budget film to date is clearly “Free State of Jones.” While $50 million is not nearly as expensive as a Disney or Fox tentpole, it does call into question whether STX is pointing its resources — and its investors’ resources — in the right direction.

One industry insider, who spoke on condition of anonymity, told TheWrap that STX is simply experiencing some growing pains: “They clearly have the ability to make high-profile productions with major creative talent, and that’s pretty rare for a studio less than a few years old.”

Keeping in mind that its future slate made a splash with at CinemaCon earlier this year — the company’s first-ever presentation at the annual Las Vegas conference — Fogelson and his team may have already made pivots.

In the hopper, they have a timely thriller by Jonas and Alfonso Cuaron called “Desierto,” set in the no-man’s land of illegal immigration from Mexico.

Also Read: 6 Takeaways From CinemaCon 2016, or How Sean Parker Blew It

And “Bad Moms,” starring Mila Kunis and Kristen Bell as leading mama-rebels, offered footage that had audiences rolling with laughter.

“We are very proud of this film and our collaboration with all of the talent involved,” Fogelson said of “Free State.” “And while we hope we will perform well, we are not in the one-film-a-year business. We’ve got ‘Bad Moms’ coming next month, and ‘The Edge of Seventeen’ right after that, and a whole slate behind that. We’re built to produce and distribute 10 to 15 films a year, and to produce TV and digital short form content, games and virtual reality projects. STX isn’t a film studio — it’s a fully integrated media company.”

But Bock and other insiders indicated that STX’s film division needs to be smart moving forward. “It’s either big-time blockbusters or well-received genre pics. If you don’t fall into that category, it’s extremely difficult to attain much traction these days,” said Bock. “If STX continues with this [mid-budget] formula, they better be damn sure they have solid reviews going forward, because they won’t survive for very long at the rate they’re going.”

“Free State of Jones” represents a strategic piece of content geared toward adults, a historical drama competing against a field of big-budget animated features, superhero and video game movies, and horror films.

“Their effort to counter-program is another advantage that could still prove its value in the long run,” said one insider. “In ‘Jones” case, it may simply be undone by poor reviews and, by extension, an inability to expand far beyond its target demographic of older audiences. They are in search of one big hit and that could be a game-changer. It seems more likely to happen than not given the amount of talent they’ve assembled both within the company and in the creative process on their films.”

While it’s true there is an open market for mid-budget films, Bock argued: “But there is a reason the major studios aren’t making a lot of these films right now — they don’t make enough money.”

Still, Fogelson is confident STX is on the right track. “We strongly believe in all of the content we’re creating, and the filmmakers and actors with whom we’re creating it,” he told TheWrap. “Every single film we produce and distribute is exactly that — one film — and while we hope for the best for each of our projects, how any one film does isn’t any more significant for us than it is for any other major studio.”