With the domestic summer box office performing much lower than many hoped — including the weakest Memorial Day weekend in 18 years — the phrase “franchise fatigue” has become once again.

While comic book movies continue to be dependable hits, with “Guardians of the Galaxy Vol. 2” and “Wonder Woman” grossing more than $700 million combined, other sequels like “Alien: Covenant,” “Pirates of the Caribbean: Dead Men Tell No Tales” and last weekend’s “Transformers: The Last Knight” have fallen well below expectations.

However, even as some long-running franchises are finding their domestic numbers plateauing or declining, they have remained extremely profitable hits thanks to continued interest from moviegoers in developing overseas markets. In fact, some recent sequels are now grossing upwards of 75 percent of their total global box office cume from outside the U.S., compared to between 60-70 percent for their predecessors.

“The more films you make in a series, the harder it is to avoid taking a down-tick,” Exhibitor Relations box office analyst Jeff Bock told TheWrap. “The good news for now is that we’ve seen these overseas markets pick up the slack and studios are banking on it.”

The first movie to do this in 2017 was “The Fate of the Furious,” which is the sixth film ever to reach an overseas box office total of $1 billion. With a domestic cume of $225 million, it is by no means a disappointment for Universal, as that North American sum is just $13 million lower than that for “Fast & Furious 6.” 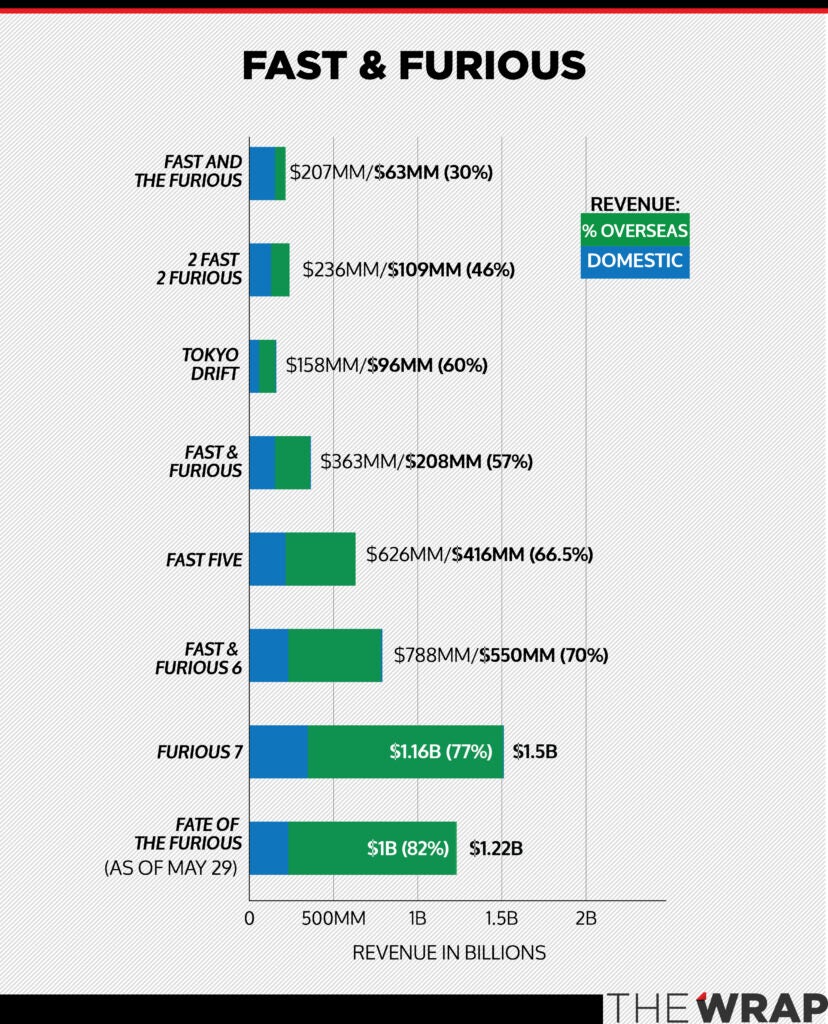 But back in 2015, interest in this franchise spiked after the death of Paul Walker, leading to a $1.5 billion worldwide haul for “Furious 7” with a franchise-high $353 million from the U.S. while overseas totals more than doubled the $550 million for “F&F6.”

While that additional interest has largely subsided in the U.S., Universal has been able to sustain it internationally, particularly in China, where “Fate” passed “Furious 7” to become the highest grossing foreign film in that market.

As a result, roughly 82 percent of the $1.23 billion grossed by “Fate” has come from overseas. It’s a sign that the studio’s decision to transform Vin Diesel’s car franchise from a series about street racing into a globetrotting stuntfest starting with 2011’s “Fast Five” has been a lucrative one, allowing the franchise to find overseas appeal as a broader action series rather than one based in the specifics of car culture.

The addition of action stars like Dwayne Johnson and Jason Statham has also kept the franchise fresh for global audiences 16 years and eight movies in. 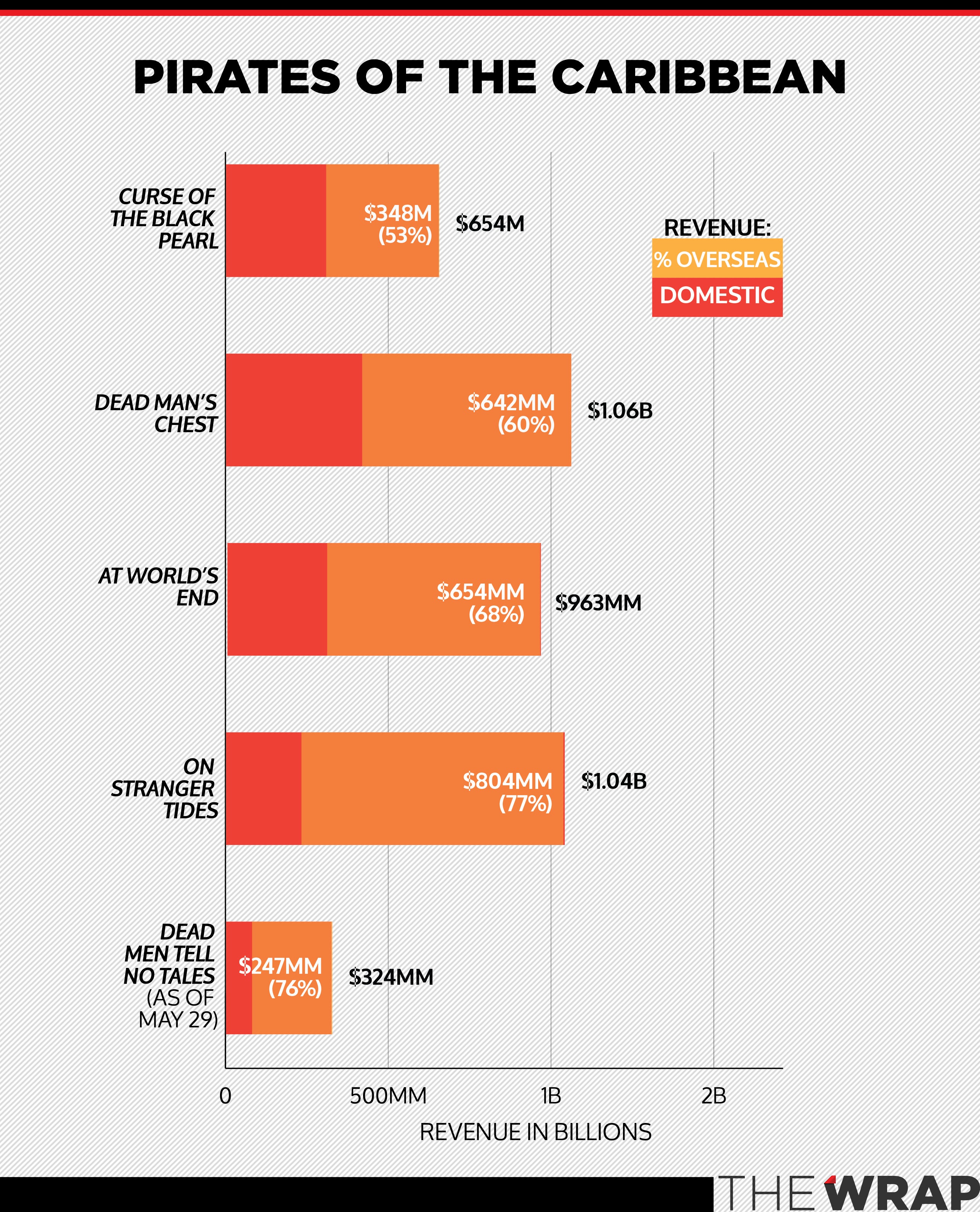 “Pirates of the Caribbean,” on the other hand, is seeing a noticeable drop in domestic openings with each successive sequel. The Disney film opened to $78 million on Memorial Day weekend, a drop from the $90 million three-day opening for 2011’s “On Stranger Tides” and 44 percent down from the $139.8 million M.D. Weekend opening for “At World’s End” 10 years ago.

The two films since “At World’s End” have seen diminishing returns, with “On Stranger Tides” becoming the first in the franchise to gross under $300 million domestically. “Dead Men,” meanwhile, saw the largest domestic second-frame drop off in “Pirates” history — 65 percent, to an estimated $22 millionm thanks to strong competition from “Wonder Woman.” After a month in theaters, the film has made just $160 million domestically.

Like “On Stranger Tides,” which passed the $1 billion mark thanks to overseas returns to the tune of a franchise-high $804 million, “Dead Men” has earned the bulk of its money overseas. Its global total stands at $679 million, with $519 million (74 percent) coming from international audiences. (The film still has to open in some major markets, including Japan on July 1.) 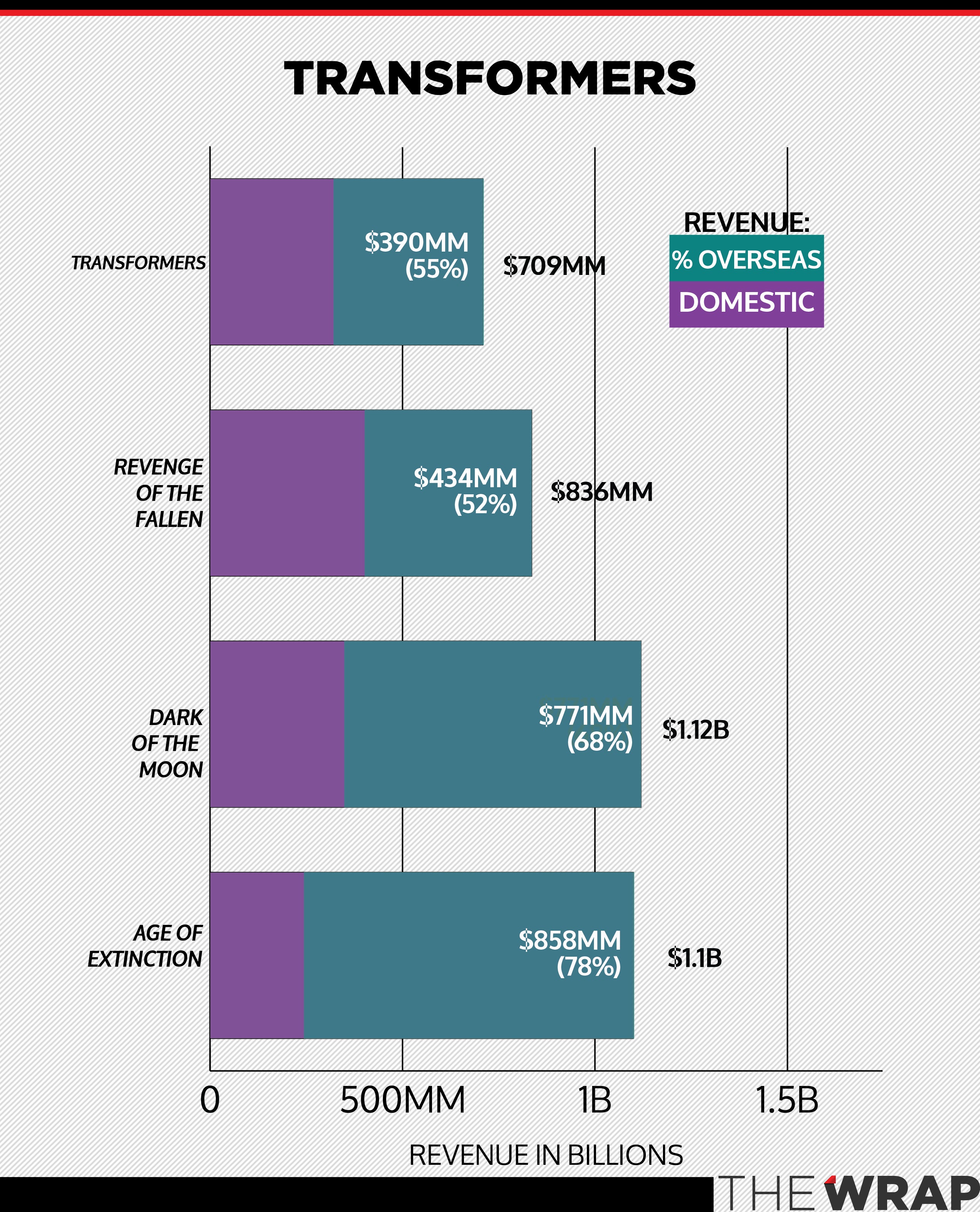 This past weekend, Paramount’s “Transformers” franchise followed the same trend of domestic disappointment but overseas success.

“The Last Knight” earned $265 million worldwide, but only 26 percent of that came from the U.S., where the film made $69.1 million over five days. It’s the lowest opening for any “Transformers” film.

On the flip side, “The Last Knight” had the highest Chinese opening in franchise history with $123 million. That’s 33 percent higher than the $92 million Chinese haul for the series’ last installment, 2014’s “Age of Extinction.” That film earned 78 percent of its $1.1 billion gross  from outside the U.S.

With “Despicable Me 3” and “Spider-Man: Homecoming” likely to pull family and under-25 audiences in the States away from “Transformers,” the overseas:domestic ratio should widen even further as the film opens in France, India, Spain, Japan, and Latin America in the coming weeks.

So what’s the difference? Bock thinks one factor is the increased investment in overseas movie theaters in recent years, making blockbuster movie-going more available to developing markets. This allowed “Pirates” to capitalize on markets like Russia, where the $63 million gross for “On Stranger Tides” was more than double for that of “At World’s End.”

“China and Europe, for the most part, are still in their infancy in terms of blockbuster viewing,” Bock says. “They’re just getting some of these IMAX screens and it’s a new thing for them.”

IMAX Entertainment CEO Greg Foster said that outside the U.S., the draw of a big Hollywood release still hasn’t faded, thanks in part to social media sustaining word of mouth. He also noted IMAX audiences in several Asian markets tend to skew young, making Hollywood fare an event in much the same way American audiences still turn out for Marvel and “Star Wars” films.

“When you look at Indonesia, India, Taiwan, etc., you see a very young population that has been very exposed to American culture,” Foster says. “It’s a hobby of theirs.”

In the case of “Pirates,” Foster also credited Disney’s international approach to marketing. “Dead Men” became the first Hollywood release to hold its premiere in Shanghai. The cast also promoted the film at Disneyland Paris, as well as fan screenings in Europe, Russia and South America.

“More than any other studio, Disney has done a great job building the trust of moviegoers so every blockbuster they release is seen as an event,” Foster said. As for the future of summer franchises and the recent drop in numbers, Foster remains optimistic.

“If you told someone six months ago that ‘Pirates 5’ was going to make $78 million Memorial Day weekend, they would have said ‘Sold,'” he continued. “The North American box office, while it might not be growing every single weekend, it is still a significant portion of the box office depending on the title.”

“Also, titles that tend to be iconic and translatable are still doing well across the board. For IMAX’s box office for ‘Pirates,’ it was still even: a third from North America, a third from China, and a third from international sans China. That tends to be how our movies perform on average.”

But Bock believes that studios are going to have to make a major decision at some point should some of these franchises continue to drop domestically.

“For all of these studios, the only thing set in stone on their slates for the next five years is sequels,” Bock said. “It still makes sense for studios to produce these films, but in most cases they’re not going to have the public goodwill in their back pocket like they used to.”

Disney owns half of the movies on this list, including ”Avengers: Infinity War“