The Oscar ballot deadline has passed.

Ballots were due at PricewaterhouseCoopers at 5 p.m. Tuesday, so if a vote’s not in now, it doesn’t count. No excuses accepted.

So … what happens next?

Rick Rosas, one of the two partners who oversee the count, once told me the company usually gets a substantial number of last-minute ballots. And years ago, one P.R. firm working Oscar campaigns stationed an observer in that lobby to find out just how many voters cast last-minute ballots.

According to what the head of that firm told me, about 500 ballots (almost 10 percent of the vote) were hand-delivered, messengered or FedExed in over the course of the day.

If everybody votes, and everybody makes the deadline, PwC will end up with 5,777 ballots. Obviously, the real number will be smaller, but Rosas says that usually the level of participation is extraordinarily high.

The ballots are not opened or counted until they’ve all been received – though once all the ballots are in, the envelopes may be opened in preparation for the count.

At this point, the ballots are moved to what is always referred to as an “undisclosed location.” I’ve heard lots of theories about where this is. Somebody once swore to me that they had a friend in a Midwest office of PwC, and that the ballots were definitely flown there – a scenario that seems so unnecessary and logistically hazardous that it has no chance of being true.

A popular theory is that the “undisclosed location” is somewhere inside PwC’s downtown offices, and they only tell us it’s undisclosed to throw us off. If I had to guess, I’d say it’s somewhere close to, but not in, PwC headquarters.

Oscar ballots (see photo above) are eight-and-a-half inches tall by about 20 inches long, and folded into six panels. The first panel contains a single category, Best Picture; the others contain three or four categories each.

The first step is to pull each ballot apart, separating it into separate panels to make the counting easier. The paper on which the ballots are printed is pretty thin, but Rosas and Brad Oltmanns, his partner in overseeing the process, say that it holds up well under all the tearing and stacking.

First off, the panels containing all the Best Picture votes are set aside. (We’ll get to those later.) The rest are divided among the four PwC employees who assist Rosas and Oltmanns. Each gets one-fourth of the ballots, so that none will know the results in any category – though it’s safe to say that in certain cases (Supporting Actor and Actress, anyone?), counting one-fourth of the votes will likely be enough to give each of the four employees a pretty good idea.

The four employees, working in a room with one door and no windows, count the ballots by hand. They go category by category, starting with the categories listed at the top of each panel. That means that Best Actor (on panel at left) will probably be the first race to be counted.

When all four have finished the count in a category, they give their totals to Rosas and Oltmans, who tally up the figures and determine the winner. If it’s close, they recount as many times as it takes to be certain of the result.

Meanwhile, Rosas and Oltmanns deal with a complication brought about by the Best Picture expansion to 10 nominees, and the introduction of the preferential count to that race.

Because you really need all the ballots to run a preferential count, and because you could theoretically hit on a winner after the first round of counting, the two balloting leaders handle those ballots themselves, without help from any members of their team.

By the end of the day, Rosas and Oltmanns will know the results in quite a few categories – the ones mentioned above, and probably a few from the second lines on each ballot panel: Suppporting Actor, Animated Feature, Directing, Original Song and Visual Effects.

The results will be locked in a safe, as will the ballots that remain to be counted.

They’ll also handle five much smaller groups of ballots, in the categories where voting is restricted to members who’ve seen all the films, usually at special Academy screenings.

Documentary Fearture and Documentary Short, Foreign-Language Film and the Animated and Live-Action Shorts categories are not included on the main Oscar ballot; those votes, which were handed directly to PwC reps after AMPAS screenings, will in some cases number in the hundreds, not the thousands.

Before the day is over, most of the categories will be decided. Again, the results go into that safe.

Meanwhile, PwC staffers type up the cards that will go inside each envelope. Each one begins with the phrase “AND THE OSCAR GOES TO.”

They prepare two cards for every single nominee … even the Supporting Actor contenders who are up against Waltz and the visual effects artists who are competing with “Avatar.”

Whatever categories remain to be counted will be finished. The four team members each will have a reasonable idea about some races and be in the dark about others.

Rosas and Oltmanns will start to memorize all the winners. In the acting categories, they’ll memorize the names; in every other category, just the name of the movie. To make sure they know them all, they’ll quiz each other.

Once again, everything goes into the safe.

Rosas and Oltmanns take the stacks of cards that have been prepared, select the ones containing the names of the winners, and place them in envelopes emblazoned with the name of each category.  They compile two complete sets of envelopes, which will be used the night of the show. They also quiz each other some more.

At the Kodak Theater, meanwhile, Oscar rehearsal is going on with the presenters who’ve been booked for the show. They’ll be using phony envelopes, also prepared by PwC, that contain the names of phony winners, along with the caveat, “AND THE OSCAR GOES TO, FOR THIS REHEARSAL ONLY …. “

At some point during the day, the two balloting leaders will stop by rehearsal for an hour or so, talking to AMPAS and show officials and getting the lay of the land backstage.

Rosas sometimes plays golf. When they go home, their wives know better than to even talk to them about the Oscar results.

The envelopes, and the counted votes, all sit in the safe. 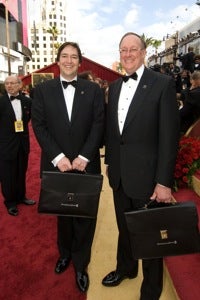 Rosas likes to read the Sunday paper, and look up the Oscar predictions all the pundits have made. He gets a good laugh over some of them.

He and Oltmanns (from left, in AMPAS photo) go to that undisclosed location and put the envelopes into briefcases embossed with the PwC logo. In one of the more famous Oscar-day rituals, they make their way to the show separately, in unmarked cars traveling different routes.

One security guard – an off-duty LAPD officer, as are many of the Oscar security forces – accompanies each man.

They get to the Kodak early, wave to the crowd, hold up their briefcases and pose for photos. Then they hang out on the red carpet for a while, stargazing like everybody else.

The difference is that security guards constantly yell for all the other looky-loos to move along and get into the theater – but if you’re one of the guys with the briefcases, nobody ever tells you to move.

By half an hour to showtime, both men are inside the theater.

Generally, Oltmanns stands in the wings stage right, where most of the presenters wait for their turn onstage; Rosas is stationed stage left, which is used mostly by the host of the show. When it’s time for a presenter to take the stage, one of the two will hand over the appropriate envelope – which means that for the most part Oltmanns has lots of interaction with the stars, Rosas not as much.

(But since Barbra Streisand is a presenter this year, and since Barbra always enters from stage left, Rosas will probably get to hand her an envelope.)

In addition to safeguarding and dispensing the envelopes, the two are there to make sure that nobody pulls a fast one and announces the wrong winner: if that happens, they’re under strict orders to immediately walk onstage, stop the show and correct the mistake.

In the event of an envelope mishap – such as the one that happened in 1996, when Sharon Stone and Quincy Jones were presenting two awards, and she accidentally gave the envelope for the second category to the first winner – they’re ready to use that memorized list of winners to save the day.

Afterwards, they go to the Governors Ball.

And then, as Rosas once said, “I go back to being a tax accountant.”