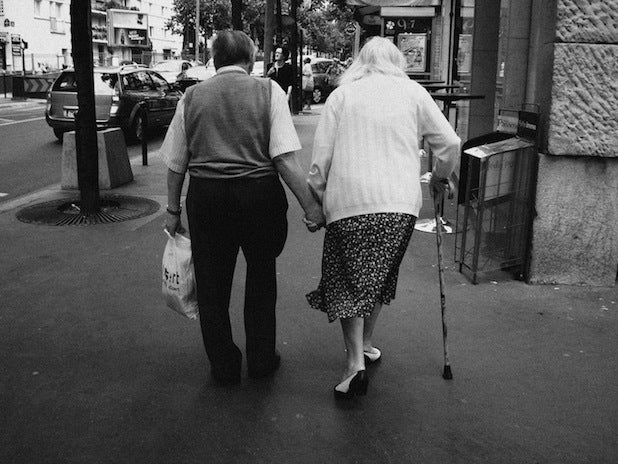 The most moving moment at the Oscars this year was not visible on television.

It wasn’t backstage either, or on the red carpet, or in the wings, though there were lots of moments of deep and authentic emotion in all those places.

No, the most moving moment at the Oscars happened in the lobby outside the Dolby Theatre.

I don’t have a picture, it would have been rude. So you’ll just have to imagine the scene:

An elderly couple – in their late 70s, I would guess – both tiny, just a little over 5 feet tall each. They were standing near the bar on Mezzanine 2, having a glass of champagne as the ceremony went on. His hair was thin and grey. He had big eyeglasses and was wearing his tuxedo and bow-tie proudly. Her hair was short and curly. She had on a simple floor-length gown and grasped her partner’s lapels to pull him close. They were staring into each other’s eyes, and laughing mischievously.

They murmured to one another, totally oblivious of me and my two guests a foot away as we talked with Morgan Spurlock who had glanced by our cocktail table. I quickly lost track of our conversation. Their connection was palpable, stunning. She would pull him close and appear to whisper in his ear, and he would burst out laughing. She rested her head on his chest, touching his chin. He beamed. Then she turned away, smiling toward her glass and it was clear she could hardly speak – her lower lip shook, her hands shook. She appeared to be suffering from some degenerative disease. Words were not coming from her mouth. But rarely have I observed two people so clearly communicating.

Who were they? Was he a member of the Academy, using his rare privilege for tickets to the ceremony? A producer back in the day, an executive perhaps?

I realized that this must have been a very special moment for them. I tried to imagine what their daily lives might be like, how much effort it must have taken them to get dressed in formal wear, make their way through the traffic and , to navigate the red carpet amid the din of the screaming crowd on Hollywood Boulevard – all to be here, together, at the Oscars.

Wrapped up in one another, they were in no hurry to return to the ongoing awards ceremony, where Neil Patrick Harris was making his way to best Foreign Film category. And I too was transfixed, I confess. At a certain point, with tears in my eyes, I leaned across the cocktail table: “You are a very beautiful couple,” I said.

They turned as if seeing me for the first time, and smiled.

I had no idea who they were, and I still don’t. But it’s been a week since the Oscars, and I cannot shake the image from my mind. My gratitude goes to them for teaching me, once again, to appreciate life’s precious moments, wherever we find them.