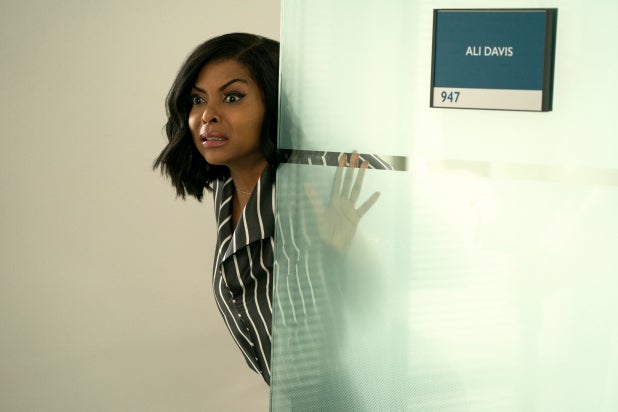 It’s hard to believe that after more than 20 years in Hollywood, Taraji P. Henson (“Hidden Figures”) is only just now headlining her first big-screen comedy, but here we are. Director Adam Shankman’s “What Men Want” is the latest in a long line of gender- and race-swapping remakes (“Ocean’s 8” and “Ghostbusters” are a few others) that Hollywood has determined to make its new cash cow.

So on the one hand, it’s great that Henson has this major vehicle that will hopefully catapult her to the status she deserves. But on the other hand, an actress of her caliber should also be entitled to an original franchise of her own.

All that aside, “What Men Want” is a classic example of a film that is amplified by the climate in which it’s born. Contrary to the original 2000 film starring Mel Gibson — which sees him as a sexist male executive who gains the ability to hear women’s thoughts — this new version finds Henson as Ali, a female sports agent who’s fought so hard to fit into to the chauvinistic spaces she occupies that she doesn’t realize, until she gains the ability to hear men’s thoughts, that she’s become just as sickening and self-absorbed as the men with whom she surrounds herself.

The result is a resonating narrative that confronts sexism in the workplace and what it means both professionally and socially, when it’s the woman who decides to be a “ballbuster.” As we learn in the film, Ali grew up and throughout her life continued to mainly associate with men — from her single father (Richard Roundtree) to those who dominate the world of sports — and has effectively discarded romantic interests and paid little attention to her female friendships (Phoebe Robinson, Wendi McLendon-Covey, and Tamala Jones). Because that’s what she’s always seen around her: frivolous human connections less rooted in substance than in opportunity. She, like Corporate America dictates, has always equated success with masculinity and did her best to be “one of the boys.”

Except Ali is obviously not a man. She is the much respected yet ruthless black woman around her male-dominated firm who’s been getting passed over for partner for many years in a row. At the start of the film, she’s been rejected for the coveted position once again and decides to go out to drown her frustrations in a few rounds of drinks with her girls, which leads to smoking some weed, which leads to sipping some strange “herbal” tea concocted by a random tarot reader (Erykah Badu) — complete with tattoos, heavy garments, piercings and a beaded curtain — that her friend suggests. That tea gives Ali the inexplicable ability to read men’s thoughts, a capability she originally considers a curse before, true to form, deciding to use it as an opportunity to get ahead.

While Gibson’s character, already a prototype of professional achievement, takes this as an opportunity to manipulate women romantically, Ali similarly decides to use it as a chance to elevate herself in a space she’s been unable to, well, penetrate — the office. That doesn’t mean that Ali doesn’t find a way to bolster her sex life as well (an eagerly anticipated afternoon booty call with the hot gym guy she’s been eyeing in the elevator, played by Kellan Lutz, is just one example), even turning a one-night stand with a handsome bartender (Aldis Hodge, “Hidden Figures”) into something more. But for the most part, she’s using it to advance at work.

That entails completely owning a guys-only poker game and swiping her colleagues’ up-and-coming basketball client Jamal Barry (Shane Paul McGhie), but also pretending her one-night stand is actually her husband so that she can appeal to Jamal’s family-oriented dadager (Tracy Morgan). But when the roles are reversed, and she finally gains the upper hand over men, she’s not hailed as shrewd or smart but instead called a “bitch” and a “ballbuster.”

Shout out to screenwriters Tina Gordon (“ATL”), Peter Huyck and Alex Gregory (“A Good Old Fashioned Orgy”) for thoughtfully considering how a woman like Ali would use these special powers while also reflecting gender politics in both the bedroom and the office. And when it all blows up in Ali’s face, she uses it as an opportunity to confront her own problematic ways, to be a better friend and girlfriend, and a wiser businesswoman. So ultimately, “What Men Want” is like the original film, except its themes more directly address real-life bias in the workplace by giving its female protagonist the permission to be cutthroat, self-obsessed, sexual, and completely unapologetic — and we still want to root for her.

Henson soars in an unimaginative yet provocative enough film that allows her to flex her physical comedy skills (her facial expressions are everything) unlike anything we’ve ever seen from her before. Josh Brener (“The Front Runner”), as her thankless assistant who’s also breaking his own barriers as an openly gay man in very straight male environment, is also hilarious and meets her every eyeroll with a quippy one-liner. But much of the props should go to post-production supervisor Lisa Rodgers (“Vice”) and editor Emma E. Hickox (“Dumplin'”), who seamlessly weave each of the male characters’ voiceovers that serve as their inner thoughts. Those inner voices, coupled with Henson’s reactions, are the real standouts.

“What Men Want” obviously doesn’t reinvent the wheel, and its biggest laughs are in the trailers, but it is a fun romp that manages to also confront a real-world issue.