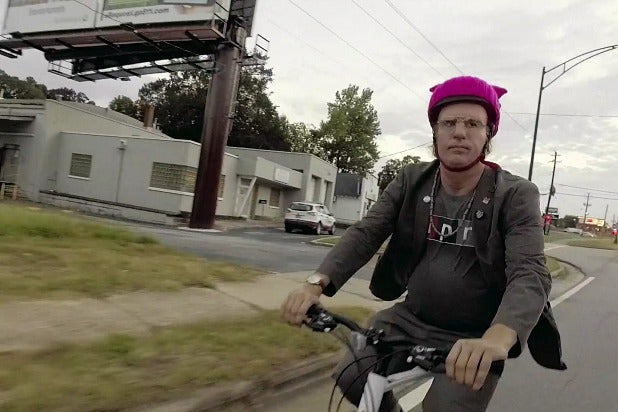 (Spoilers ahead for the premiere of Sacha Baron Cohen’s new Showtime series, “Who Is America?” We will reference the second episode, which airs on July 22, but will not reveal any details about it.)

It’s a little bit surprising that after all these years, Sacha Baron Cohen is at it again. And I mean really, really at it. After “Da Ali G Show,” “Borat” and “Bruno” we figured that particular shtick was over, because the man is so famous that pulling that kind of thing off at this point would be impossible, and yet here we are.

One viral tweet this week summed up that sentiment rather well:

lmao I am absolutely dying over the fact that now that Sacha Baron Cohen can’t prank anyone with a normal brain who has watched TV in the last twenty years, he’s moved onto pranking famous Republicans, with incredible success

Functionally, “Who Is America?” is essentially the same as “Da Ali G Show” way back when. Baron Cohen dresses up as a series of wacky characters and tricks real people into thinking these characters are real too, often exposing any sort of, ah, problematic aspects of the personalities he’s interacting with.

But it’s a different world now than it was more than a decade ago when Baron Cohen was terrorizing people as Borat, and the title of the new series certainly reflects that. Obviously, “Who Is America?” has a more overtly political bent than his previous work in this vein.

But even though the show certainly contains plenty of attempts to clown Republicans, it isn’t only about clowning Republicans. Showtime itself, when announcing the series this past week, said it “will explore the diverse individuals, from the infamous to the unknown across the political and cultural spectrum, who populate our unique nation.” The network elaborated on that in a note to press on Saturday: “This is not a statement on the state of the country, but Baron Cohen experimenting in the playground of 2018 America.”

That’s a decidedly un-pointed way of describing the show, and sort of — we would normally believe — obfuscates whatever the true purpose of the series is. Surely there is a specific thing Baron Cohen is trying to say, right?

Also Read: Sacha Baron Cohen Denies Fooling Sarah Palin: 'I Did NOT Say I Was a War Vet'

Well, the first episode is all over the place in terms of the types of people his four characters pick on. There’s Bernie Sanders, an art consultant in Laguna Beach named Christy, a very nice Republican couple and, yes, an array of Republican politicians who come off extremely badly.

The characters Baron Cohen plays are themselves a fascinating group. Two of them, the hard-right Israeli Erran Morad and the Alex Jones-esque Billy Wayne Ruddick, are pretty easy to peg as conservative caricatures. Rick Sherman, the artist who draws portraits with his own poop, seems apolitical. But liberals are not spared, as we’ve got the “self-hating white male” Dr. Nira Cain-N’Degeocello as well.

Looking at that group of characters and the people he talked to in this first episode, it’s tough to peg what the show’s bent is going to be across the entire seven-episode run. If we’re looking at this as a series with more of a specific point than Baron Cohen’s previous similar works, the easiest and most surface-level way to look at it might be that it’s just clowning the United States in general. But that doesn’t feel right.

Also Read: Joe Walsh Says He Was 'Duped' by Sacha Baron Cohen, Too

Aside from those Republicans who meet with Erran Morad — a character who is certainly geared toward bringing out the worst in right-wingers — the people who meet the other three characters in this episode don’t come off badly at all. Bernie handles himself pretty well, for example, when Ruddick whips out a nonsensical graph to explain his “put the 99 percent in the 1 percent” plan to fix wealth inequality. The Republican couple (one have of whom is South Carolina Trump delegate Jane Page Thompson) who dine with Nira Cain-N’Degeocello manage to stay respectful in the face of his extreme performative leftist shtick. And the art consultant just seems to be trying to see the best in Rick Sherman. She lacks any animus whatsoever, even while Baron Cohen spends the entire conversation basically daring her to mock him.

The Nira Cain-N’Degeocello character  is an odd wrench in the idea that this is a show about clowning Republicans. But I don’t think he exists to own the libs, even though he does feel at times feel like somebody that Turning Point USA might have dreamt up. I don’t think he’s a joke on all those on the left, but rather just on a specific type. The way he introduces himself, as “a cisgender, white, heterosexual male, for which I apologize,” reminded me of a billboard that went up on Hollywood Boulevard a few years back, which read simply: “ON BEHALF OF ALL MEN, I APOLOGIZE.” To some degree, and among some people, that sort of performative liberalism that Nira Cain-N’Degeocello represents is definitely real.

At the same time, it’s not really clear what the point of the character is. Maybe he’s just there as a sort of supplement to the Erran Morad character — they both exist to try to get Republicans to be say awful things, just using different approaches. But since that isn’t what happens in this episode, it’s hard to know for sure. Maybe he really does just exist so the show can claim to be an equal-opportunity offender.

So there’s not a ton of clarity to be had from this first episode because it goes all over the place like that. After a screening of the first two episodes this week, as we tried to process what we’d just seen, another attendee told me he felt the point was more or less to remind Americans that, as dire as things may seem right now in Trump’s America, we’re not all that bad. (The person who said this to me, by the way, was not an American.)

If I had to draw a conclusion based solely on the first episode I might go with that, but the second episode doesn’t quite play nice with that thesis. I won’t spoil the details for you, but episode two is a much harsher experience overall.

These two episodes, then, don’t really function as a thematic unit — but, of course, they don’t have to on their own because there’s still five more episodes of “Who Is America?” beyond them. And, thus, plenty of chances for Baron Cohen to continue to surprise us.

So, to get back to my original question: What really is the point of Sacha Baron Cohen’s “Who Is America”? Or, to put it differently, what is it that he and his writers are trying to say with this? Having seen just two episodes I don’t think the answer is clear at all, and that’s fine. But if I had guess right now, I would say that the question itself is the point.