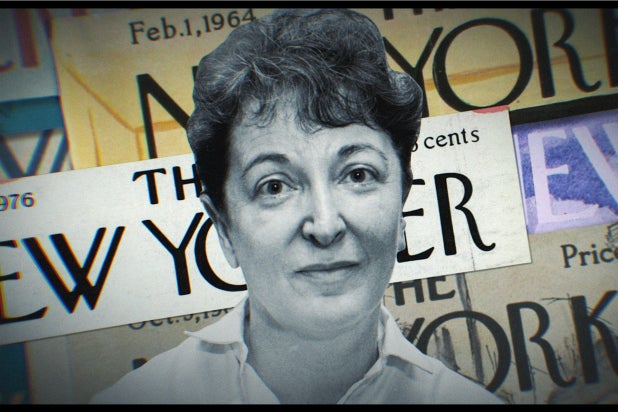 It’s hard to believe with all the divergent opinions floating around today about movies on Twitter, Facebook, Rotten Tomatoes, Metacritic and dozens of other outlets, that there was a time when a handful of influential film critics wielded the power to make or break a movie.

And the most powerful of those critics was Pauline Kael, who held sway with a sharp tongue and corrosive wit at the New Yorker from 1967 to 1989. To see Rob Garver’s affectionate documentary about her career, “What She Said: The Art of Pauline Kael,” is to be once again swept away by the excitement of cinema as she experienced it.

Born on a chicken farm in Northern California and raised in San Francisco, Kael was an outsider to the New York art scene, and that otherness gave her the temperament and cocksure confidence to find her own voice. She desperately wanted to be an artist, but after failing as a playwright, she drifted into reviewing films by accident. Never shy about expressing her opinion, in her first review in 1952, she referred to Charlie Chaplin’s “Limelight,” which she detested for its sentimentality, as “Slimelight.”

Also Read: Pauline Kael Biographer: She Would Have Loved 'Bridesmaids,' Hated 'The Help'

Kael worked hard to develop a looser writing style, favoring American vernacular over academic objectivity amd ultimately becoming a terrifically entertaining read. Her first regular gig was for McCall’s, but her merciless pans of popular films proved too much for the women’s magazine after she called Julie Andrews’ performance in “The Sound of Music” “sexless and inhumanely happy.” In a clip from an interview with David Lean, the “Lawrence of Arabia” director says Kael’s slam of his film and personal attack on him at a New York Film Critics dinner was severely depressing and made him question his chosen profession.

At the New Yorker, Kael had the good fortune to be around for the emergence of the Hollywood New Wave in the late ’60s and ’70s, an explosion of talented young filmmakers who bucked the studios to make more personal and relevant movies. One colleague even credits Kael for starting the American New Wave. While that might be overstated, she did help promote the careers of Martin Scorsese, Brian DePalma, Robert Altman and Sam Peckinpah, among others.

For the movies she loved, no praise was too excessive. She rescued “Bonnie and Clyde,” which most mainstream critics had savaged for its extreme violence, and turned it into a hit. In perhaps her most famous review, she compared the revolutionary impact of Bernardo Bertolucci’s “Last Tango in Paris” to the first performance of Stravinsky’s “Le Sacre du Printemps” in 1913.

It was a heady time for American movies, and Garver’s film captures the fervor of the era with more than 150 clips and stills along with voice-overs from Kael’s reviews — alternatingly lacerating and ecstatic — read by Sarah Jessica Parker. And Kael appropriately speaks for herself in a number of TV interviews, coming across as a savvy commentator on popular culture. Dozens of friends, writers and filmmakers, including Paul Schrader, Francis Ford Coppola and Camille Paglia, have their say about Kael. And contemporary directors David O. Russell and Quentin Tarantino gush over how much she influenced their future careers with her poetic prose.

Kael understood that “people don’t tend to like a good critic, they hate your guts.” So she went on the offensive and became a provocateur. She baited and battled with her editor at the New Yorker, the straitlaced William Shawn, by throwing in references to things like cunnilingus and latrines. She feuded with other critics (notably Andrew Sarris), producers, directors and studio heads, who at one time banned her from screenings. Not surprisingly, some of the remembrances of her are not glowing. Overall, they paint a picture of a brilliant, complex and often difficult person. Pulitzer Prize-winning critic Joe Morgenstern admits, “she could be very combative … and cruel for no reason.”

Getting personal was part of her unmistakable presence. Contrary to how most film critics of the day approached their work, Kael would regularly insert herself into her reviews. Part of that came from her natural orneriness, and part of it was the fact that she was one of the few women working in what was then almost exclusively a boys’ club. She liked to see herself as one of the tough dames from the ’30s screwball comedies she loved.

Kael sought to spread her base beyond the New Yorker and cultivated a network of young critics (known not-altogether-flatteringly as “Paulettes”) and helped them get jobs around the country. Was it self-serving or a reflection of her boundless enthusiasm for movies? Probably a little of both. As much as he respects her, Schrader suggests, “She wasn’t promoting cinema; she was promoting herself.”

In the end, what Kael created — including enough reviews to fill 13 books — was a raging debate about the art of cinema. Films were important enough to our collective cultural life then to argue about fiercely.

Kael’s intensity is rarely seen in today’s conversations about movies; there are so many other distractions to occupy our time. So “What She Said” is probably more for fans who lived through that era and her reign as the diva of film critics. It’s unlikely that many younger viewers are going to wonder, “Who is Pauline Kael?” and seek out Garver’s documentary, which is too bad. Kael’s passion is still inspiring and a welcome jolt for jaded moviegoers. And for critics.