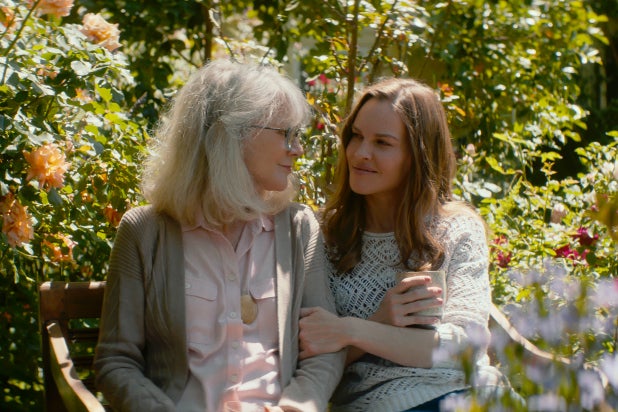 “What They Had” isn’t so much an Alzheimer’s movie as it is a film about a family in crisis. Yes, a senior woman suffers from dementia, the severity of which her husband, kids, and granddaughter seem to think is up for debate. But they all have problems that fight to inform their decisions about how to handle it, and the bigger issue is the exhausting challenge of being a caregiver, especially when the person you’re caring for is family.

The film promises to be sentimental from the start, with first-time writer-director Elizabeth Chomko focusing on photos and a Christmas tree as Ruth (Blythe Danner) puts on lipstick and a coat in the middle of the night and walks out of her Chicago home; she’s still in her nightgown. By the time her husband, Burt (Robert Forster), notices, she’s long gone, and he calls his local son, Nick (Michael Shannon), who by default is charged with looking after them. But he in turn phones his sister, Bridget (Hilary Swank), who flies in from California with her college-age daughter, Emma (Taissa Farmiga). All are alarmed except for Burt, who tries to downplay Ruth’s wandering.

To Nick, this is the sign they’ve been waiting for: It’s time to put Mom in a home. But Ruth used to work in nursing homes, and Burt, who’s still vital, doesn’t want to do that to “his girl” of 60 years. Bridget wants to respect his wishes. Nick barks a little louder, but she has power of attorney. She does what she can to let them age in place, though her big idea conveniently lets her test her desire to free herself from her husband and flirt with the construction guy she knew in high school. Nick has romantic problems of his own, while Emma hates school and is trying to hide the fact that she hasn’t signed up for any classes next semester. Everyone is miserable and constantly at each other’s throats.

That early sentimentality never snowballs. Chomko makes the family a salty bunch, with Dad responding to Ruth’s disappearance with a “Goddammit!” and Nick commenting on the name of a home — the “Reminisce Neighborhood” — with “Yeah, they’re all called s–t like that.”

Their discussions of and responses to Ruth are unflinchingly real, from their laughter when she announces that she’s going to have a baby to Nick shouting at Bridget about how difficult it is to have to be available at their parents’ demand. As is usually the case with the caregivers of Alzheimer’s sufferers, impatience gets the best of everyone, even Burt: When Ruth asks how he and Bridget know each other, her husband says, “She’s our daughter, for chrissakes.”

Another theme is the loneliness that can spring up in relationships. While Burt’s is obvious (how painful it is to live with someone who doesn’t always remember you), Bridget and Nick suffer instead from ennui and an inability to commit, respectively. Burt repeats throughout the film that “love is commitment,” but his children are convinced that their relationships aren’t as special as his. (When Nick challenges his mother to identify their father, and she responds with an adoring “He’s my boyfriend,” you don’t doubt it.) Nick sleeps in the bar he owns, and Bridget feels an increasing need to get out of her marriage.

The acting across the board is top-notch. Swank and Shannon anchor the film as the bickering, stressed-out siblings, with Swank’s Bridget the softer heart who’s just short of being a pushover while Shannon’s Nick is the frustrated realist. You respect them both. Forster, meanwhile, plays Burt as a husband and father who’s always a little worked up, knowing he’s fighting a losing battle but determined to do battle nonetheless. Farmiga is appropriately student-sour.

But Danner, of course, is the real key to the film’s success, largely keeping Ruth’s forgetful episodes tinged with sadness instead of being straight-up loopy and making her present moments all the more wonderful to behold.

The real triumph of “What They Had,” however, is its refusal to descend into mawkishness, even when a third-act tragedy takes place. Chomko doesn’t drag on a scene longer than it should be; there’s an expediency to her storytelling that gets the point across without the film feeling rushed. It’s blunt and bold, just like its characters.