The self-proclaimed “Fred Astaire of Karate,” Jean-Claude van Damme appeared at the Marche in Cannes with “The Eagle Path” (Rodin Entertainment), a film that he directs and stars in and which has a number of programmers and buyers scratching their heads. 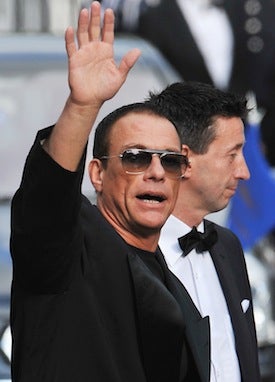 “It could possibly be the biggest embarrassment of his career,” said Fantastic Fest director Tim League, who was a big fan of 2008’s “JCVD.”

“Right when he had built up my hopes with ‘JCVD’ … I thought, this man has been underrated for so long …” But “The Eagle Path” just didn’t do it for League or his colleagues in the genre programming arena.

Another person in the conversation (while awaiting the start of a midnight screening of “L’Autre Monde” – a French virtual-reality thriller) recalled a Gersh Agency screening last month where Van Damme planted himself in front of the door, making it impossible for this audience member or any other to leave.

“He spent 20 minutes before the film started, explaining everything that was going on in his life,” this fellow went on to say before having a sudden flashback from the film and exclaiming, “When he tries to pull the catheter out, I almost lost my mind!”

On reconsideration, this all-male delegation decided "Eagle Path" just might be a new entry in the “so bad it’s good” annals of cinema history.

Someone closely involved with the distribution of "JCVD" in the U.S. was compelled to stay until the bitter end of “The Eagle Path” at the Marche screening. “The end is completely insane in its ‘2001’-like montage spanning birth, death, the end of the world, you name it,” he said.

But the most surreal part of the equation was that in his personal remarks at the screening, “It felt like Van Damme was talking to us [the distributors of ‘JCVD’] when he got up and said, ‘I’m saying this to distributors. I know I haven’t been good in the past. I will come to your theaters. I will do your American TV shows.’”

Van Damme was bad, and he did not do these things, to support the critically acclaimed “JCVD” distributed in the U.S. by PeaceArch Entertainment, now owned by Phase4.

“He hurt himself,” another programmer said. This was his chance for a comeback and he blew it.”

In the now famous straight-at-the-camera monologue Van Damme gives in the film he bares his soul, candidly talking about his substance-abuse problems and the fears of an action star nearing 50 (Van Damme turns 50 on Oct. 18).

The press loved "JCVD," and Van Damme got the best reviews of his career in a well-crafted independent film from young director Mabrouk el Mechri. Between dinner and my midnight screening last night, I kept running into a trail of people who had been shafted when Van Damme bungled a golden opportunity to be taken seriously, by not coming to the U.S. to support the opening of “JCVD” as he had promised.

Canceling about 72 hours before he was supposed to fly to New York from Asia, Van Damme gave the excuse that one of his seven dogs was ill. Exhibitors had sold tickets to opening weekend predicated on an in person appearance by the “Muscles from Brussels” and had to refund a fair number of admissions.

“Everyone looked bad,” a distribution consultant friend said. “We had promised Van Damme to the theater owners and now their patrons felt like they had purchased tickets under false pretenses.” By not coming to the United States, Van Damme missed valuable press opportunities as well as obligations on the DVD version, an incident that is widely believed to have affected “a decent gross that could have been higher.”

There is no doubt that Van Damme has an enormous worldwide fan base and that his films do well on DVD, but his erratic behavior has many who might have pursued the title wondering if they want to go down the distribution road with him. Especially on a film that one person described as “’Bad Lieutenant’ gone idiotic.”