“What We Do in the Shadows” fans who were hoping to see Laszlo Cravensworth (Matt Berry) reprise the role of his alter ego Jackie Daytona in the upcoming third season of the FX comedy won’t be getting their wish, as executive producers say bringing back the fan-favorite fake identity from Season 2 in this next batch of episodes would have been “pandering.”

“I don’t think we could top Jackie Daytona,” “What We Do in the Shadows” executive producer and writer Paul Simms said Friday during a virtual panel for the show at FX’s day presenting for the Television Critics Association’s press tour. “We talked about it, and we felt like it would be pandering to try to bring him back. Stefani, does that sound fair?”

Executive producer and writer Stefani Robinson, who wrote the Emmy-nominated Season 2 episode that introduced Jackie Daytona and featured his nemesis Jim the Vampire (played by guest star Mark Hamill), titled “On the Run,” added: “I think that’s sounds fair. He’s not back this season. But I’m sure that when the timing is correct, Jackie Daytona might make an appearance again, I’d say.” 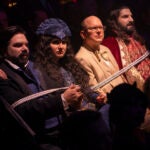 Also Read:
‘What We Do in the Shadows’ Gets Early Season 4 Renewal at FX – Watch Season 3 Trailer Here (Video)

Well that’s good news! Because even though you won’t be seeing Jackie Daytona (pictured above) in the upcoming third season, which premieres Sept. 2 on FX, the show was renewed for Season 4 on Friday, so there is plenty of time for Laszlo to get in enough trouble that he needs to run away and take on his Jackie Daytona persona again.

Simms and Robinson were joined on the panel by “What We Do in the Shadows” stars Kayvan Novak (Nandor the Relentless), Matt Berry (Laszlo Cravensworth/Jackie Daytona), Natasia Demetriou (Nadja), Harvey Guillén (Guillermo) and Mark Proksch (Colin Robinson).

Here’s the official description for Season 3 of “What We Do in the Shadows,” per FX:

“After the shocking season two finale, we find the housemates in a panic about what to do with Guillermo after discovering that he is a vampire killer. This season, the vampires are elevated to a new level of power and will encounter the vampire from which all vampires have descended, a tempting Siren, gargoyles, werewolf kickball, Atlantic City casinos, wellness cults, ex-girlfriends, gyms and supernatural curiosities galore. Plus, Colin Robinson is turning 100. And Nandor, faced with his own eternal-life crisis, tries to inject his life with more meaning. Will he find love or is he destined to be an immortal bachelor with 37 ex-wives?”

“What We Do in the Shadows” is executive produced by Jemaine Clement, Taika Waititi, Paul Simms, Stefani Robinson, Sam Johnson, Garrett Basch and Eli Bush.

The FX Productions show has received 10 Emmy nominations, including Outstanding Comedy Series, over the course of its first two seasons.