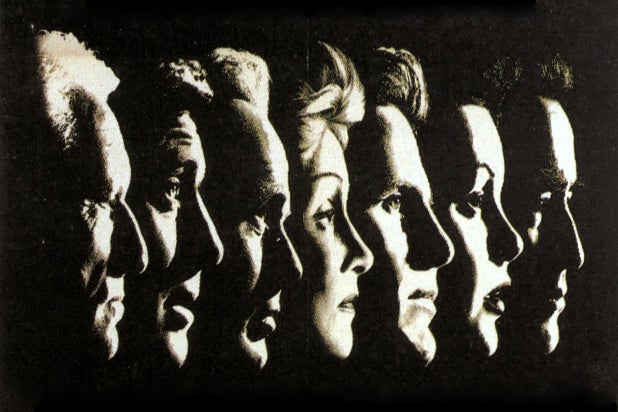 I was sitting in a darkened auditorium on the campus of Santa Monica City College a few months ago. Stanley Kramer‘s “Judgment at Nuremberg” had been screened for students courtesy of The Stanley Kramer Foundation. Watching this epic, and distinctly Kramer-esque damnation of fascism, I couldn’t help notice those in attendance whose attentions were diverted by glowing iPhone screens. Seated next to me, a strangely alluring young woman who constantly smacked her gum close to my ear provided a percussive counterpoint to the staccato tapping of fingernails on glass. I was tempted to wrench her phone from her manicured fingers and hurl it towards the screen.

But, that would have had me removed forcibly — instead of leaving in disgust a short time later under my own steam.

“Judgment at Nuremberg” allowed us to see, for the first time, the starkly graphic films that were taken by concentration camp liberators. When Stanley Kramer was busy creating propaganda movies for the U.S. Military during WWII, he was privy to footage that showed the bulldozing of bodies and the horrific conditions of camp survivors. Kramer never saw action, which disappointed him. However, the images that scrolled through his government issued Movieola “horrified him,” according to his wife Karen Kramer — who along with daughter Kat Kramer heads up the The Stanley Kramer Foundation.

“We were exposed to a lot less back then than we are today. The footage that he saw was jarring. Stanley felt that he had been a witness to it, and those images from the camps stayed with him for a long time. He demanded that they be used in ‘Judgment at Nuremberg,’ and they were, said Karen Kramer. “Stanley had those images in his mind for years. ‘Judgment at Nuremberg’ was made 13 or 14 years after the war ended. When the film was completed Stanley decided that it must be premiered in Germany. He wanted Germany to be witness to those images, as well as the rest of the world.”

The images of emaciated Jewish corpses stacked like wood, and the haunting staring eyes of gaunt Jewish children are something that one never forgets. When you take these grainy newsreel ghosts and add them to the drama and tension of the Nuremberg trials, at the hand of an activist like Stanley Kramer, then context confirms the callousness of those swept up in the craze of anti-Semitism.

There it was — through Maximilian Schell’s intense deposition of the retarded victim of sterilization; Montgomery Clift, while the cold lizard like eyes of those whose response of “we were just following orders” viewed the courtroom tableau with veiled contempt — it was all there. At the hands of an artist with a voice, the dramatization of the Nuremberg trials continued to make an impact on me, even in that SMCC auditorium, that was slowly being depleted of apathetic students. They had begun to leave a scant half hour into the movie.

“Judgment at Nuremberg” premiered in December 1961 in Berlin at the “Berlinale” International Film Festival. Willy Brandt, then mayor of Berlin, prior to his becoming the leader of the Social Democratic Party of Germany, made the “brave decision” that “Judgment at Nuremberg” was to be screened. A year before, Kramer had earned an award from that same festival for “Inherit the Wind.” Prior to the screening of “Judgment,” Willy Brandt stood up and warned the audience that they “might not find the film pleasant,” but if Berlin was ever to regard itself as a capital city, then this film should be shown there because it was about all of them. “We may like or dislike or disagree with many things,” he said, “but here it is.”

When the film concluded, there was a deafening silence. The audience had rejected it, and in their guilt many stood up and exited the theater. There was no Q and A like there would be at the screening in Santa Monica I attended. The guilt of those who stood by silently while six million Jews were slaughtered in that theater in Berlin had been transformed into the laconic disregard of this dark period by film students.

When the lights went up in the auditorium, students stretched and returned the last texts before being asked to put their phones away. I scanned the audience again, many had left during the screening. Those that remained probably did so because of the watchful eyes of their cinema professor, who introduced a Q and A by Karen Kramer to what was left of the audience.

What followed was disappointing on so many levels. Questions were asked of Karen Kramer that showed little understanding of the movie, and much less of the subject. One Asian student wondered if the Holocaust was as detrimental to history as was the incarceration of Asian Americans during WWII. Karen showed a characteristic flair for diplomacy, where I would probably not have been as “PC.” The incarceration and subsequent seizing of Japanese property during WWII was criminal — however it didn’t hold a candle to the abomination that was the Holocaust. Although this student had a more relevant and even visceral connection to the internment of his people and their own relocation to camps, I could not conceive how this could be viewed as anything close to the execution of millions. That’s when I got up and left.

What went wrong with the Holocaust? Why is this generation so injured from the ethnic cleansing of millions of Jews and other ethnic groups that didn’t match the German racial template that was to be the Aryan nation? This isn’t ancient freaking history, it’s only a generation removed from them. Yet, the lesson seemed to be lost, at least on this group.

The fading voices of Holocaust survivors will soon be as silent as the reception that “Judgment” received when premiered in Berlin. I wanted to take each one of those students on a tour of LAMOTH (Los Angeles Museum of The Holocaust) where the archives and influence or these first person narratives of the Holocaust are approachable and interactive. The spectra of anti-Semitism that is filtered through more PC versions of hate that calls itself “anti-Zionism” or “anti-Israelism” is verdant on the campus of UCLA, where Palestinian influenced student groups seek to stifle anyone’s access to Israel, if they are running for UCLA student government positions. Hungarian deniers that the Holocaust existed, characterize it instead as a “police action against aliens,” and threaten that “although it didn’t exist, it will soon.”

That’s why I’m co-producing an event that gives voice to Holocaust survivors through a stirring Concerto by Israeli born film and concert music composer Sharon Farber. The heroics of Holocaust survivor and hero of the Dutch Resistance, Curt Lowens, has the attention of the Consul Generals of Germany, The Netherlands and Israel, who will come together on the night of June 13 to not only celebrate the heroics of a SAG/AFTRA actor who saved the lives of hundreds of children, but also to herald a foundation whose purpose is to leverage the arts to fight oppression.

Ken Howard, president of SAG-AFTRA will be delivering a proclamation to Curt Lowens for his service to humanity and long career as an actor. I invite each and every one of you to this free event on the evening of June 13 at the Saban Theatre in Beverly Hills.

The Holocaust happened, and it’s now up to artists to carry forward the fading voices of Holocaust survivors. Please join me.

Editor’s Note: The title of “Judgment at Nuremberg” was misspelled in an earlier version of this story. TheWrap regrets the error.