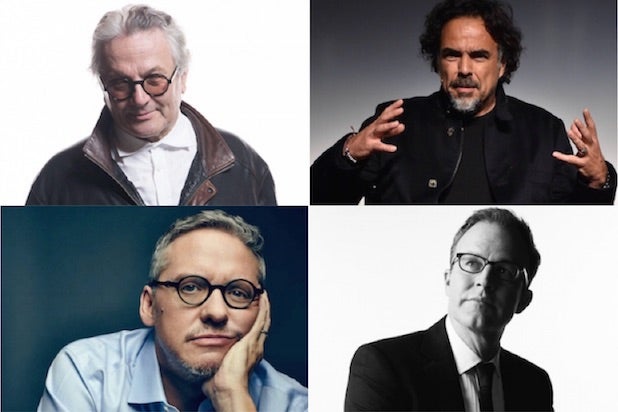 Two weeks ago, I wrote about how the Producers Guild Awards were going to clear up a confusing Oscar race and give us a real frontrunner.

I suppose they did, briefly. But the PGA winner, “The Big Short,” is hardly a secure favorite. In a wild, confusing year, that movie grabbed the top seed by winning the Producers Guild, but then couldn’t hold serve the following week at the Screen Actors Guild Awards, where it lost the ensemble award to its chief competitor, “Spotlight.”

But SAG by itself wasn’t enough to make “Spotlight” a favorite — so once again, the focus shifts to the next major guild honors, the Directors Guild of America Awards on Saturday.

Over the last 20 years, 16 winners at the Directors Guild Awards have gone on to win the Oscar for Best Director, and 15 of their films have won Best Picture.

The four Oscar frontrunners are all represented with DGA nominations: Alejandro G. Inarritu for “The Revenant,” Tom McCarthy for “Spotlight,” Adam McKay for “The Big Short” and George Miller for “Mad Max: Fury Road.” And so is Ridley Scott, mysteriously bypassed by the Academy’s Directors Branch for “The Martian,” but still a formidable challenger within his guild.

For those interested in sifting the tea leaves, the Directors Guild Awards could be the final big opportunity to learn anything. The last of the major guild awards, the Writers Guild of America Awards, won’t be nearly as helpful in deciphering the Oscar race: Because “The Revenant” wasn’t eligible and because “Mad Max” is all action rather than dialogue, the only Oscar frontrunners also nominated by the WGA are “Spotlight” and “The Big Short.”

And they’re in separate categories where they will most likely emerge with twin victories, “Spotlight” for original screenplay and “The Big Short” for adapted. That means the WGA won’t help much — and that means it’s up to the DGA to clarify things a bit.

The trouble is, it’s not hard to imagine any one of the five directing nominees winning — but of those five possible outcomes, only two would do much in the way of clearing up the Oscar race. The other three would take a confusing race and potentially make it even more confusing — or even more fun and entertaining, if you actually like the idea of going into Oscar night with some genuine suspense.

Here’s what could happen, and what it could mean.

Adam McKay wins for “The Big Short”
This would come the closest toward giving us a real frontrunner, because “The Big Short” has already won the most accurate predictor from among the guilds, the Producers Guild. (They’re the only guild that uses the Academy’s preferential system of vote-counting.) Adding the second-most accurate, the DGA, would make it hard to bet against the film, particularly if it then follows with an expected WGA win.

But for McKay to win, the directors would have to go for a guy known for broad comedies like “Anchorman” over the iconic likes of Miller, Scott and Inarritu. If that happens, he’ll clearly be the man to beat on Oscar night.

Tom McCarthy wins for “Spotlight”
In a way, “The Big Short” and “Spotlight” are fighting for the same voting constituency, so a DGA victory would mean as much to the latter as it would to the former — or even more, since the win it does have, SAG ensemble, is the least reliable at predicting a Best Picture win. Clearly, another major guild award — and another guild that goes for “Spotlight” over “Big Short” — would be a big boost that would put the two films neck-and-neck going into the big show.

And like “Big Short,” “Spotlight” is expected to win a WGA award, which would give the film a formidable three major guild awards going into the Oscars. The only films to win three guilds and not win Best Picture in the last 20 years were “Brokeback Mountain,” “Little Miss Sunshine” and “Apollo 13.”

Alejandro G. Inarritu wins for “The Revenant”
So far, the wins for “The Revenant” have been limited to Leonardo DiCaprio taking one best-actor award after another — and if it doesn’t win at the DGA, that’s likely to be its fate at the Oscars, too, denying Inarritu the chance to become the first director to win back-to-back picture and director Oscars. (He won last year with “Birdman.”)

But a lot of voters are impressed by Inarritu’s massive undertaking, and a DGA win would go a long way toward making it a serious rival to “The Big Short” and “Spotlight” — particularly among voters inclined toward something less talky and more muscular.

A DGA win wouldn’t mean more than the Producers Guild award that “The Big Short” won, so it wouldn’t give us a new favorite. But it would make the race a real nail-biter.

George Miller wins for “Mad Max: Fury Road”
Miller has lots of critics’ awards, but he needs to show that his reinvention of the action movie has muscle with the guilds, too. After losing at the Producers Guild (and being overshadowed by “Star Wars” and “The Revenant” at the Visual Effects Society’s VES Awards), “Mad Max” has seemingly slipped to fourth place among the frontrunners, something that a win at the DGA would quickly change.

As with Inarritu and “The Revenant,” a DGA win for Miller wouldn’t automatically make “Mad Max” an Oscar favorite, but it would tighten the race.

Ridley Scott wins for “The Martian”
Since Scott wasn’t even nominated by the Academy, this won’t tell us a damn thing — unless you believe in the possibility of a “Ridley was snubbed” narrative taking hold and leading to an upset Best Picture victory for the film.

That seems unlikely, so a Scott win would mostly retain a very unsettled status quo, with “The Big Short” continuing as an uneasy frontrunner.

We’ll know a few answers by about 11 p.m. on Saturday night. But given the kind of year it’s been so far, it might be foolish to pretend we’ll have any real answers.