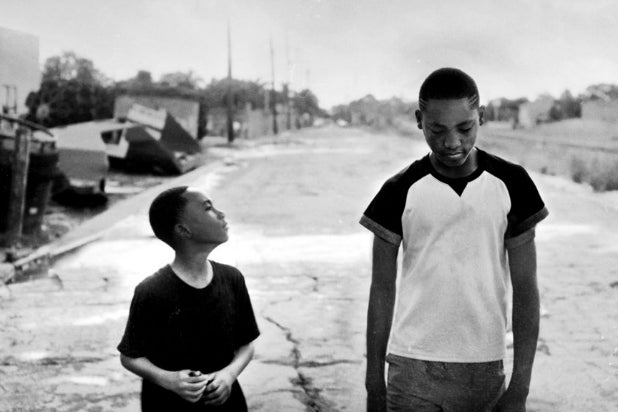 It’s hard to describe a film that is merely a series of pointed, often fiery, discussions between different people on the topic of race, particularly when those discussions, ultimately, aren’t impactful. They manage only to rile up an audience that is already overwhelmed by their own experiences with race without providing any forward movement or direction. So let’s just call writer-director Roberto Minervini’s “What You Gonna Do When the World’s on Fire?” what it is: aimless and triggering.

It’s the most unproductive type of sociopolitical film, especially in today’s climate, in that it aims to incite but not to motivate. Documentarian Minervini (“The Other Side”) introduces us to black people in 2017, living deep inside the margins in Louisiana and Mississippi and feeling helpless following a rash of brutal murders of black residents that have gone carelessly unsolved. The constant lack of attention to black bodies has pushed each subject to various points of desperation, hopelessness, and fatigue.

Using cinematographer Diego Romero’s crisp but shallow black-and-white lens — presumably to add a sobering effect to the exasperated dialogue — the filmmaker illuminates the characters as they lament systemic issues like mass incarceration, the racial wealth gap, and police brutality, all of which remain as urgent today as ever. But as relevant as these conversations are, none of them give the audience any respite.

Also Read: Jazz Legend Louis Armstrong to Be Subject of Next Film From Imagine Documentaries

In fact, these interviews can easily qualify as what the kids call tragedy porn, in that “What You Gonna Do When the World’s on Fire?” seems to take advantage of black rage and pain for the benefit of art. For example, we meet Judy Hill, a sexual-abuse survivor and former addict grappling with losing the only major asset she has: the bar she owns is being ripped from her grasp when her white landlord claims she’s fallen short on rent. As she pleads in the film, she fought hard to purchase the bar — something she could finally call her own after a life of hardship — and made steady monthly payments on it, only for it taken from her as the neighborhood grew increasingly gentrified.

It’s the age-old adage of even when you’re winning, you’re losing, and as Judy declares at the top of the film in a speech laced with horrifying historical references, black people were always taught to concede to white people even at their most reprehensible, like when white cops rampage a black neighborhood.

Judy’s despair gets so bad that, as she breaks down in tears, she encourages another black woman suffering from a similar trauma to “take another snort on me” because it’s “whatever makes you feel good.” This crushing moment is compounded when the two women also interrogate whether God is actually “woke” in the midst of all of their pain. While an affecting scene, it is a relentless portrayal of a tragic black woman at the very end of her rope.

We start to see some sense of relief when we follow a female Black Panther and her team, also incensed by the lack of racial justice in the neighborhood, using their energy to hand out food to people living on the street and organizing protests to bring attention to police misconduct. But even this well-intentioned pursuit concludes with the activists being slammed to the ground by police, reminding us that good deeds are also vulnerable to white supremacy.

The youngest people featured, Ronaldo King and Titus Turner, mostly remain unscathed from overt racism. But they know just as well as everyone else that five black people were shot in the neighborhood just last week (with another shootout the week prior), so their mother Ashlei is quick to remind them just how expendable they are — and that they should be home before the streetlights come on so that they won’t be the next one killed. But the best scenes in the film are when Ronaldo and Titus are off on their own, playing in a wasteland of rubble and for a moment enjoying freedom from fear. That is, until Titus momentarily dashes out of Ronaldo’s eyesight, and just like that, his anxiety quickly envelops him once again. It’s Minervini’s most effective glance at how trauma grips even the youngest generation of black people in a world that has succumbed to its own moral decay.

But these impressive scenes are few and far between in a film that is almost oppressively bleak and focused more on agony and less on survival and starting a conversation. By showing a slice of life for the extremely disenfranchised, “What You Gonna Do When the World’s on Fire?” seems to exist only to generate anger and sympathy while not offering much in the vein of humanity. The people are all presented as merely walking casualties in the epidemic of racism with no hope to prevail.

Perhaps that is precisely Minervini’s point, but in today’s culture of misery in the wake of Trump’s election, how is this moving the conversation forward?