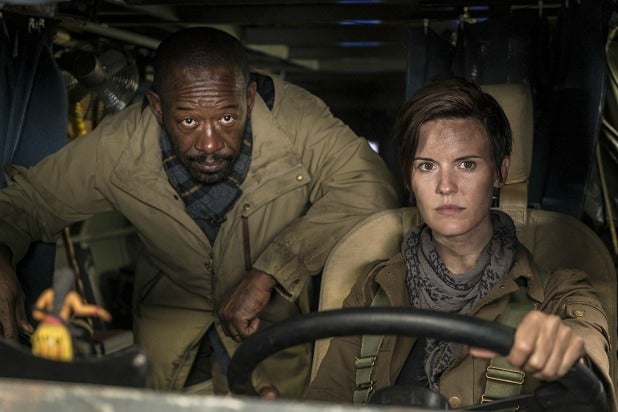 So here we are, at the much anticipated crossover event between “The Walking Dead” and “Fear the Walking Dead,” and it was a hell of a doozie.

For most of the episode, the original main cast of “Fear” was nowhere to be seen, instead focusing entirely on Morgan’s (Lennie James) long journey away from Rick and co. until he met up with a couple other new characters, played by Garret Dillahunt and Maggie Grace. But the episode focused entirely on those three until the very end, when the old cast finally appeared.

And when they showed up, hoo boy, what a re-introduction. Strand (Colman Domingo) and Nick (Frank Dillane) and Alicia (Alycia Debnam-Carey) and Luci (Danay Garcia) ambushed the new people, looking all dirty and gross. They’re basically bandits, and it looks like they’ve been through the ringer.

Also Read: 'Fear the Walking Dead' Cast: 'You Might Be Surprised Who the Villains Are' in Season 4 (Video)

The key to understanding what’s going on there is knowing how season 4 of “Fear the Walking Dead” is structured. It’s not a straightforward narrative this time, but instead this season will feature parallel stories. What we saw in the season premiere represents the beginning of one of those stories — next week, you’ll see the beginning of the other, which will explore how exactly Madison’s crew ended up all haggard and terrifying.

The parallel plots will likely play out through the entire season of “Fear the Walking Dead” — though that’s just a guess, since I’ve only seen the first two episodes. For however long it lasts, though, it seems like a pretty novel concept. And, yes, the mysterious flag that Morgan and his new friends encountered will be very important next week and beyond. But, again, I’ll hold my tongue from talking about it any more for the sake of not spoiling you. But, rest assured, we’ll talk about this more next week.