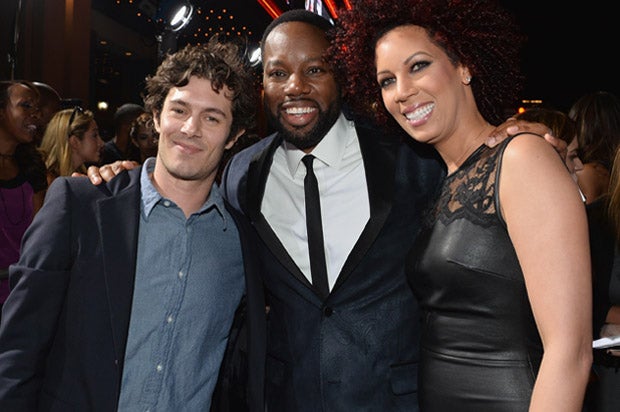 When David E. Talbert entered the editing room after shooting his debut movie, “First Sunday,” he realized he had a lot to learn about how to direct a movie.

Talbert came to Hollywood from the world of theater, where he is widely respected as a playwright and director. Yet while theater directors rely on what they see with their eyes, movie directors rely on the varied perspectives a camera offers.

So before he made his second movie, “Baggage Claim,” he took a crash course in romantic comedies with fellow directors Tim Story and Bill Duke. He also listened in on his wife’s phone conversations – the source of some of his best stories.

The result of that hard work was “Baggage Claim,” a film he wrote and directed from his own novel about a flight attendant on the hunt for the perfect man. Played by Paula Patton, she stumbles through a series of mishaps before realizing true love was right in front of her.

Fox Searchlight will release the movie on Friday, so TheWrap spoke with Talbert about the secret to a good romantic comedy, casting Adam Brody as a gay flight attendant and why he might take some time off from theater.

As you were doing your research for “Baggage Claim,” what movies had the greatest impact on your filmmaking?
The favorite films of mine were romantic comedies. I looked at Rob Reiner and how he directed “When Harry Met Sally,” Nora Ephron and show she directed “Sleepless in Seattle” and “You’ve Got Mail.”

Those movies had a magic to them. Nora Ephron let her movies breathe, and I wanted a movie that breathes comedically and romantically. I wanted to allow this heroine that is hopeful and beautiful and even a little clumsy to run free.

Most of your work is about romance of some kind.
I got started from a heartbreak when my college sweetheart and I broke up. I called her and asked her to marry me. She said “I’ll call you back.” I called her a couple days later and she said “I’ll call you back.” I started writing poetry – somebody done somebody wrong poems – while listening to Al Green. One day that Al Green record scratched and I started writing short stories and plays.

How do you keep the romantic comedy genre fresh?
Trying to find love is the most unique pursuit that we experience in life. Most of the crazy stories and the most authentic ones come from me eavesdropping on my wife’s conversations with her girlfriends. For this one she was talking to one of her girlfriends about how she met this great guy in Chicago and how he’s flying her out for Thanksgiving. She thinks he’ll ask her to marry him and then calls her back three hours later and says, “Girl oh girl he had a boat. He put me up in this amazing hotel.”

My wife says, “why would he drop you in a hotel?!” My wife is the Gail character.

Just with that line or throughout the movie?
My wife is always the Gail character; she’s always pointing out the obvious.

So did she have a hand in picking Jill Scott, who plays Gail?
She has a hand in everything. Are you married?

Not yet.
Let me tell you something. I am the director, but the director has a director and that is my wife. She is the executive producer of the movie and chimes in on all things. She wills her way into everything. All the guys in the movie – Taye Diggs, Trey Songz — she wanted. When you get married, you will realize women are so much smarter than we are.

I hope my girlfriends past and present know I listen.
Then you’re on the right track.

You brought up casting, how did you cast this? Jill Scott and Adam Brody as the flight attendants were my two favorite characters in the movie.
When it came time for the movie I just called on my friends – Ricky Smiley, “Nephew Tommy” Miles. I wanted to sprinkle it with some fun, some things you wouldn’t see coming. I created that whole airline network specifically for the film and populated it with people you knew but hadn’t seen in those kinds of roles.

You’ve never seen Jill as a sexy or comedy as she is in this movie. You’ve never seen Tia Mowry go crazy or Trey Songz be funny. Taye Diggs — you’ve been watching him in drama for so long you forget what a great comedic actor he is.

Adam Brody just got voted the sexiest Jew in Hollywood, but who’s ever seen him play a gay flight attendant?

(Above: Brody with David and Lyn Talbert at the “Baggage Claim” premiere.)

After you directed your first movie, did you start writing your plays and books with movies in mind?
I know how to make them cinematic now, and the thing about having source material like that is you don’t have to spend time wondering if it’s good or not. The novel was a bestseller so I didn’t have to wonder if the story worked or not.

In some of the press notes, you talk about this movie appealing to all audiences. What about it is universal?
The pursuit of love – the most fragile pursuit that we have. I wanted to make it feel like a story everyone could relate to that just happened to be about African-Americans. That’s the response I’m getting.

Much has already been made about the number of films made by black filmmakers this year, whether it’s the financial success of “The Butler” or the awards hopes of “12 Years a Slave.” We’d all like to see Hollywood continue to give opportunities to talented black filmmakers. How do you sustain this?
What’s fueling the renaissance, if you want to call it that, are good stories. The stories would be good regardless of who was acting in them. Kevin Hart’s stand-up is just funny material. “The Butler” is a historic and it’s just a good piece. That’s what’s going to keep this from becoming an anomaly — more storytellers and filmmakers need to focus on telling good stories.

Are there other stories you want to tell?
I’m doing two more movies with Fox Searchlight; I’ve been bit by the film bug. Theater will always be my first love, but film just casts such a big net on such a huge canvas. It’s alluring and seductive. I’m going to hang out with film for a minute.