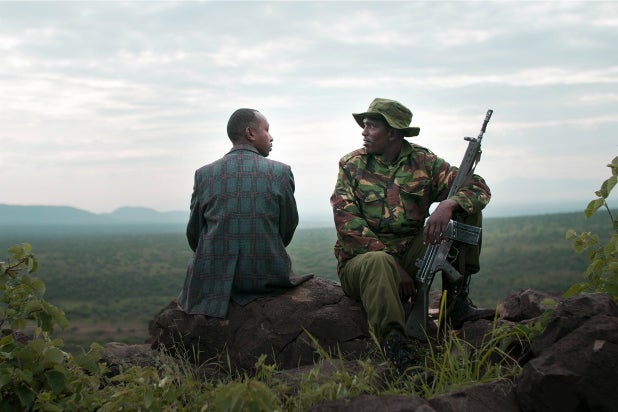 When it comes to sympathetic documentary subjects, elephant poachers rank somewhere between Steve Bannon and those responsible for the Indonesian genocide. To hear one of those poachers tell it in “When Lambs Become Lions,” however, it’s the rangers attempting to stymie their efforts who are “not human” because of the lethal action they take when catching would-be hunters on protected lands.

Director Jon Kasbe allows both sides to speak their piece in his non-fiction film (shot over the course of three years in Kenya), which takes its name from one of that country’s proverbs: “An empty stomach will turn many lambs into lions.”

Suffice to say that this documentary lives up to that adage. The first thing to know about the movie is that it does not feature any direct footage of elephants being harmed or killed, though two scenes come close. That’s a mercy as well as a relief, though some purists may wonder whether it’s better to spare one’s audience or confront them with the grim reality; it works here, though, if only because Kasbe is less concerned with the act of poaching itself than he is with the people on both sides of it. (For the opposite approach, look no further than Ulrich Seidl’s endlessly upsetting “Safari.”)

Unfolding over a scant 79 minutes, “When Lambs Become Lions” grapples with thorny material without overstaying its welcome. The interviewees, who are referred to only by their first names (and, in the case of one poacher, simply “X”), speak candidly about their illegal way of life. Unapologetically, too: Like many forced into extreme positions by circumstance, they care less about questions of morality than they do about feeding themselves and their loved ones.

The film begins with the smoke of a raging, strangely beautiful fire whose source isn’t revealed until an hour later; when that moment comes, it feels like a gut punch. For all its talking, “When Lambs Become Lions” is at its best when the scenery speaks for itself.

Kasbe presents the poachers’ case — in short, extreme poverty — without judgement, ditto that of the rangers. They don’t fare much better financially, at one point being told that their two-month delay in being paid will continue and anyone who doesn’t like it can be replaced. It’s here that we see how thin the line between the two groups really can be, especially since two of the film’s subjects (one a poacher, the other a ranger) are literal cousins.

Like matadors getting gored by bulls, poachers who get caught or killed while tracking their prey often unleash a wave of schadenfreude from anyone who hears of their fate. “When Lambs Become Lions” complicates that by putting a human face on it; the sight of unsuccessful hunters being captured doesn’t bring much righteous indignation here, instead producing a mix of pity and contempt at a situation that’s dispiriting from top to bottom.

That fate is still unlikely to elicit much sympathy from most viewers, making it difficult to fault Kasbe for failing to get us us to truly identify with these men. Elephants are endangered, killing them is wrong, and the luxury items their ivory tusks are used for are depressingly inessential.

It’s unlikely that any documentary could make us feel half as bad for the poachers as we do for their prey, which might not even be Kasbe’s aim. He succeeds in bringing shades of grey to a situation usually thought of in black-and-white terms — not enough to change many minds, perhaps, but at least enough to open some.