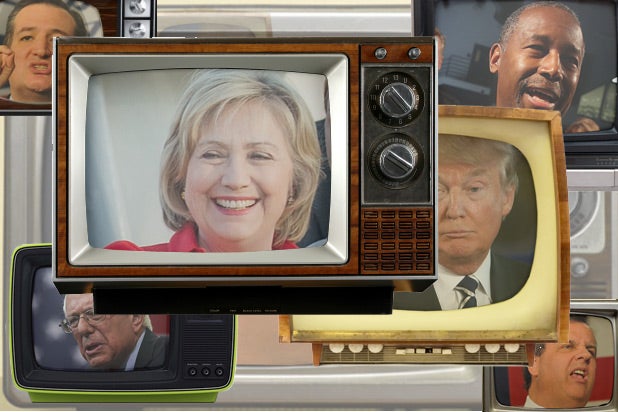 “Hillary Clinton has such an appealing and engaging storyline, it’s become a mainstay in multiple popular primetime dramas,” advertising expert and founder of the Los Angeles-based The Brand Identity Center, Chad Kawalec, told TheWrap. “She feeds the TV dramas and they feed her.”

Clinton’s imprint can be felt across broadcast and premium cable shows. CBS’ drama “The Good Wife” has its fictional Illinois Gov. Peter Florrick (Chris Noth) embarking on a presidential bid against Clinton in the 2016 race. Her name is dropped so often she should be getting residual checks.

Téa Leoni‘s character in the sophomore CBS political drama “Madam Secretary” is such a ringer for Clinton, it prompted Fox News to ask, “Is ‘Madam Secretary’ a campaign ad for Hillary Clinton 2016?”

The creator of the original U.K. version of “House of Cards,” Lord Michael Dobbs, recently told BuzzFeed he thought Robin Wright‘s fictional first lady in the Nextflix adaptation was clearly inspired by Clinton.

And ABC’s “Scandal” has its fictional first lady, Mellie Grant (Bellamy Young), as the newly elected freshman senator from Virginia with her sights on the Oval Office as soon as her husband’s second term runs out.

“There is an emotional connection to the characters when watching your favorite TV show as opposed to watching a news segment,” Oliver Luckett, founder of Los Angeles-based media company theAudience, told TheWrap. “It’s the difference between reading a web page and a really good book.”

While media experts all agree cable news programs are still essential to any candidate, getting written into a popular scripted primetime drama comes with added benefits.

“When you watch, say, ‘House of Cards’ you’re committing 12 hours of your life,” Luckett said. “But when you watch the news, you might watch 12 hours over a three-month period. And even that coverage is split among hundreds of subject matters.”

Also Read: 'The Good Wife' Showrunners on Season 7: How They're Including Hillary Clinton, And That Final Archie Panjabi Scene

Not only is Clinton featured prominently in many popular primetime shows (whether explicitly or implicitly), it’s how she’s being incorporated into the storylines that could have a major impact.

On the “The Good Wife,” Peter Florrick is running for president. But his goal is to make enough of a splash to be picked as Clinton’s running mate, further cementing her status as the presumptive Democratic presidential nominee.

“Hillary Clinton has basically mastered the art of product placement,” Kawalec said. “When a brand becomes part of scripted programming, it’s because it’s already embedded in the culture. The fact that there are so many successful scripted shows that play off the Hillary brand is an indicator of how culturally relevant she is.”

The real question is, can all this primetime hype translate into actual votes come November 2016?

Pop culture has long been credited with changing public opinion on social issues. Some have argued David Palmer, who played a black president on Fox’s “24” from 2001 to 2006, helped viewers become comfortable to with the idea of electing Barack Obama in 2008.

Same goes for NBC’s “Will & Grace,” which was credited with changing attitudes towards gay people in America. The short-lived 2005 ABC drama, “Commander in Chief,” starring Geena Davis as the first U.S. female president, experts say, helped people warm up to the idea of woman in the Oval Office.

“These shows are creating a filter that is allowing viewers to envision Clinton as president, which is essential for her because there has never been a female president before,” Kawalec said.

Of course, there are some drawbacks to being written into a TV show. “Scandal,” for example, features some reminders of Clinton’s past that the candidate would likely rather forget. President Fitzgerald Grant, played by Tony Goldwyn, has an affair with prominent Washington fixer Olivia Pope, played by Kerry Washington.

Not everyone is convinced scripted shows can actually influence the electorate.

“It won’t necessarily change people’s minds about a specific candidate,” Patricia Phalen, Assistant Director at the School of Media and Public Affairs at George Washington University, told TheWrap. “Also, many people who watch those shows are likely liberals and Hillary supporters.”

Still, many experts agree that TV shows can have a significant impact on how people perceive a certain politician.

A 2003 study by the University of Missouri-Columbia showed that people who watched NBC’s popular “West Wing” had a more positive perception of presidents George W. Bush and Bill Clinton. Researchers concluded that even though the show was fictional, it provided “something to the American public that it cannot get from any other source, a vision of what it is like to be president on a daily basis.”

“One of the things that entertainment can do is show you what’s behind the curtain,” Phalen said. “When you see the challenges they face every day it helps you identify with the person.”

In the season premiere of “Madam Secretary” this fall, Leoni’s Secretary of State Elizabeth McCord is sworn in as acting president after Air Force One goes missing. While her presidency only lasts a few hours, she passes her short-lived test with flying colors.

“It creates a pattern in viewers’ brains that says this is a real possibility,” Kawalec said. “And not only is it a real possibility, it’s a positive one. These women on these shows aren’t bad presidents; they’re as good and as capable as the male presidents, maybe even better.”