The creators and stars of “While You Were Partying,” a brief experimental theater piece that opened at Off Broadway’s Soho Rep on Wednesday, have a knack for subverting expectations.

For starters, the show opens with Julia Mounsey sitting beside a simple table and hitting play on a recording on her phone, which has been set beneath a microphone. While Mounsey remains silent, occasionally looking at the audience, her voice narrates a monologue about how she lost her job and her apartment during the pandemic and moved back home with her not-so-understanding parents in the suburbs. There, she reconnects with a childhood acquaintance named Brian who both provokes her and later challenges her to write a comedy sketch about his recent suicide attempt — “but it has to be actually funny.”

Cut to Brian Fiddyment and Peter Mills Weiss, seated at that same table, reading from a script of that sketch. Fiddyment is Brian while Weiss plays his mother, maintaining a deadpan equilibrium as the conversation turns increasingly confrontational and bizarre. 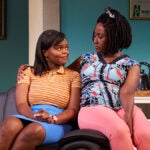 At one point, Fiddyment works himself into a physical state of rage, his face turning lava red, that is both alarming and riveting. And somehow also funny. But is that only because Mounsey has primed us to view this as a comedy sketch and Weiss has a natural flare for understated line delivery?

Mounsey, Weiss and Fiddyment, who have collaborated on previous projects that have similarly played with the nature and contours of performance, took the title of their new show from a popular online meme that mocks people who waste their type with partying and mundane activities: “While you were partying, I studied the blade.”

Instead of katanas, though, this trio of young millennials has clearly been studying the history of avant-garde theater (perhaps the early work of Wallace Shawn and the Wooster Group). And rather than channel their enthusiasm into more modern endeavors like film, web series or podcasts, they are exploring the boundaries and limits of live performance in a way that can’t easily be replicated in other media.