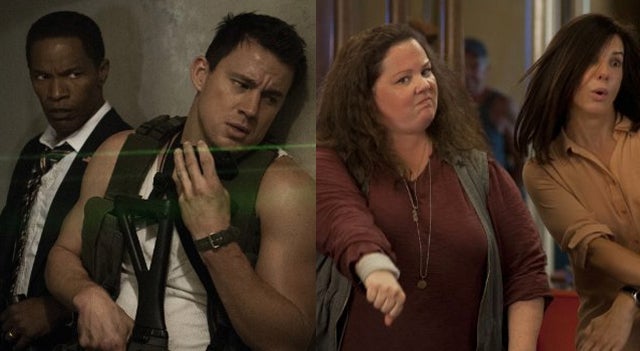 While "White House Down" and "The Heat" are battling for second place at the box office this weekend, critics have already decided that director Paul Feig's follow-up to "Bridesmaids" is the best bet for audiences looking for their comedic action fix.

"The Heat," which stars Melissa McCarthy as a Boston cop who must team up with uptight FBI agent played by Sandra Bullock, has scored a 64 percent "fresh" rating on critic aggregator Rotten Tomatoes, while Roland Emmerich's version of "Olympus Has Fallen" has been certified "rotten" with only 49 percent of critics giving the movie a thumbs up.

TheWrap's critics, Alonso Duralde and Leah Rozen, agreed with the majority of their critical peers in their respective reviews.

"Unlike so many comedies that are funny enough, with a decent joke every few minutes to keep you seated, 'The Heat' features lots of big laughs in almost every scene of its nearly two-hour running time," Duralde wrote.

Although "White House Down" leading man Channing Tatum won Rozen over with his "goofy, lunkish charm," she was not impressed by Emmerich's second annihilation of the nation's capital.

"The cat-and-mouse game in 'White House' goes on and on (the movie runs for two hours and 17 minutes), growing more preposterous and silly by the scene. This totally is the stuff of action movies, not real life," Rozen wrote. "It’s kind of fun, in a dopey way, for a while, but then it’s just noise and firepower and boys with their toys."

Other critics, like Leonard Maltin, found the preposterous and silly premise to be an entertaining break from reality.

"I’ve never seen anything quite like it: not a self-parody, but a film that asks you to take it seriously at one moment, then throws out all sense of logic the next," Maltin wrote in his review. "The result is outlandish, inventive, and completely entertaining. I’m tempted to call it my Guilty Pleasure movie of the summer, but I don’t feel all that guilty."

Vulture's David Edelstein praised the "Die Hard"-esque release to be wildly entertaining, and praised the explosive adventure for its unexpected audience participation element.

"Of all the dumb megabudget 'Die Hard'-like action pictures of the last few years (including that other White House Goes Boom movie, 'Olympus Has Fallen'), this is both the most entertaining and the most inviting of viewers' input," the critic wrote. "The characters need to be told- loudly – to get a move on before the terrorists can shoot them."

"I've got nothing against a dumb action movie on a hot summer night. What's not to like about escapism? 'White House Down' helpfully answers that question by giving you tons of stuff not to like," Travers wrote. "I mean, there's dumb and then there's idiotic."

Travers has yet to issue an opinion on "The Heat," but Maltin did. And he liked it, too.

"I feared that we might have seen all the funniest bits of 'The Heat' in its trailer; fortunately, I was wrong," Maltin wrote. "The preview only offers a glimpse of what both Sandra Bullock and Melissa McCarthy have to offer in this rowdy, raunchy buddy-cop comedy. They make a terrific team. "

Many agreed, including the Washington Post's Ann Hornaday. While managing to squeeze in a mini-review of "White House Down" in the same sentence, she notes Bullock and McCarthy are better than the movie they're carrying.

"Like Channing Tatum and Jamie Foxx in “White House Down,” Bullock and McCarthy and the chemistry they generate are far more compelling than the movie they’re in," Hornaday wrote. "Too often the sketches go on too long, and the coarse, abrasive tone quickly begins to feel repetitive and off-putting."

So it seems that both the onscreen teams featured in "The Heat" and "White House Down" deliver laughs, except one team might not necessarily be doing it on purpose.